When EA revealed the first Star Wars: Jedi Fallen Order gameplay at EA Play 2019, the reaction was mixed. Its traversal looked torn straight from Uncharted, the levels seemed linear, and the lightsaber combat – while cinematic – did not look particularly complex. After 15 minutes of hands-on time with a saber-heavy section of the game, I’m delighted to say that Fallen Order’s combat is challenging, complex, and brutally punishing.

The demo starts me off against a couple of melee Stormtroopers. They wield electrified batons (“TRAITOR!”), and can be beaten with a simple three-strike combo. You can parry and riposte their attacks, dodge around them to land a free hit, or mangle them with a variety of Force moves. Easy enough.

The next wave pits me against a mix of melee and ranged Stormtroopers and things quickly get messy: I’m blocking blaster fire while trying to land a hit on two highly aggressive melee attackers. Blaster bolts can be deflected, sending them straight back at the grunt who fired them, but nailing the timing is tricky when you’re also parrying melee strikes. Multiple enemies won’t wait patiently for you to slice them up one-by-one; instead, they’ll swarm you, putting you on the back foot and keeping you there until the fight is over.

The Force is how you level the playing field, but your energy is limited, so you need to use your power judiciously. For example, throwing your lightsaber through a grunt is an easy way to take them out of the equation, but it will consume half your Force juice. Alternatively, you can slow time, flank a couple of troopers, and cut them down before they know you’ve even moved. Finally, there are the familiar push and pull powers, which are handy for hurling the poor bucketheads into dangerous objects – perhaps your standard explosive barrel, or more deviously, a blaster bolt fired by one of their comrades. 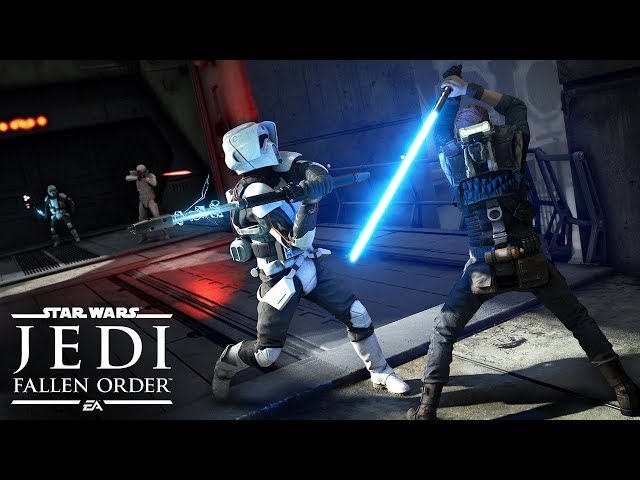 By the time I’ve got to grips with all this I’ve made it to wave 15. Two Stormtroopers snipe me from afar, while up close, I have to juggle a KX security droid with unblockable attacks, and a pair of elite melee troopers with more damaging combos and shorter wind-ups. It takes several deaths before I’m able to kill just one of my enemies during this wave – the ferocity and variety of attacks coming my way is overwhelming, and healing, like taking a sip of precious Sunny D in Dark Souls, leaves me completely vulnerable for a couple of seconds.

Enemies swarm you, putting you on the back foot and keeping you there until the fight is over

Eventually I’m able to string a few attacks together and bounce some blaster fire back at the Stormtroopers, but the real breakthrough comes when I land a perfectly-timed dodge on the droid. This gives me a window to wind up a couple of heavy attacks and put the tanky robot down for good. Next, I Force-pull one of the elite troopers and hold them in front of me as a shield against their friends’ attacks. With the field thinned down to just two, the rest is trivial. 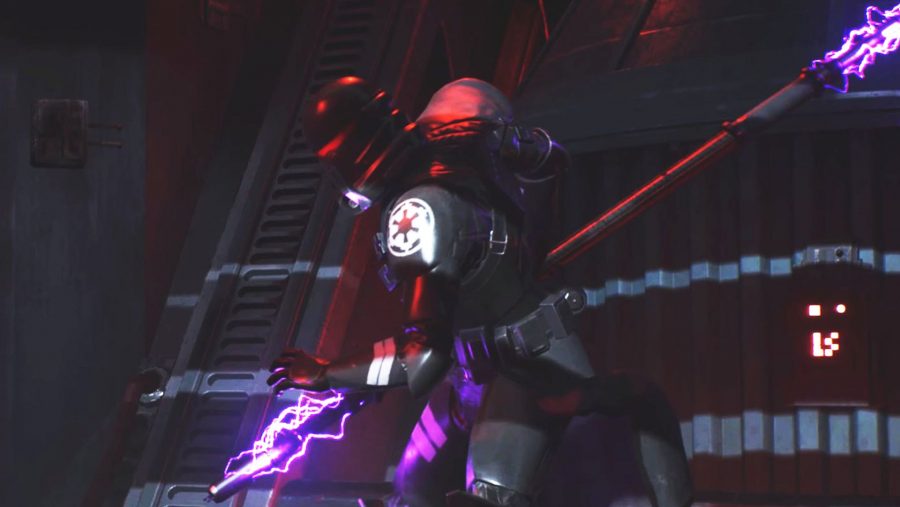 All of this requires the same mental clarity as defeating a Dark Souls boss: you have to manage the battlefield, be aware of every threat, and – most importantly – stay calm. The mixtures of different enemies and attack types make it very difficult to find your flow during combat, and a single mistake can get you caught in a devastating combo, or surrounded by enemies and stun-locked to death.

Given this similarity when managing henchmen, it’s odd that one area in which Jedi Fallen Order doesn’t feel on par with Dark Souls is its boss fights. The final encounter of my demo is with an AT-ST walker. It has three different attack phases, which repeat in a very predictable pattern, and are very easy to counter.

First it spits out some proximity mines that you need to dodge, then you need to parry its main cannon, dealing minor chip damage. In its final phase it’ll fire rockets at you, which you can Force-push back into its path. This cycle repeats two or three times until the AT-ST tumbles over, at which point its pilot clambers out and pulls a blaster on you. This is a gift of an opportunity to parry their shot back home – an effortlessly cool finish to a dreary, disappointing, and pretty easy fight. 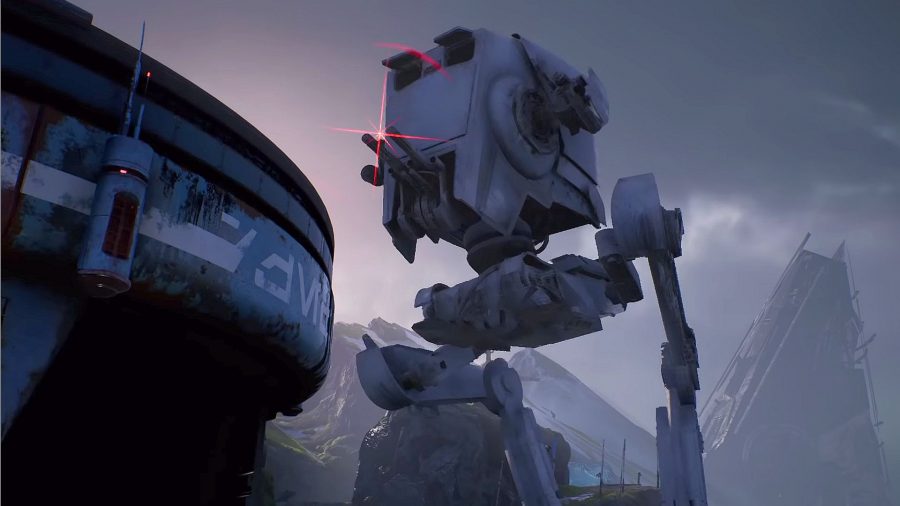 Like all the enemies I faced, the AT-ST didn’t pose much of a threat on its own, but when multiple lesser enemies are on the field together, Fallen Order’s combat already shows some thrilling depth. Hopefully its other bosses can raise their game a little; the prospect of a climactic showdown with some deadly Jedi hunter is tantalising, and on current evidence, the game’s excellent lightsaber combat deserves such a showcase.