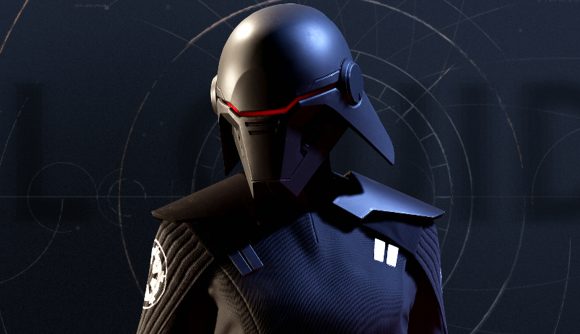 Star Wars Jedi: Fallen Order is one of the best Star Wars games available in recent years and that’s partially down to its engaging characters – in particular, its conflicted primary villain the Second Sister. Now, a first look at the Obi-Wan Kenobi Disney Plus series has suggested that the Second Sister may make the jump to live-action and appear in the show when it launches next year.

Recent Star Wars projects have borrowed numerous elements from classic games – the Dark Troopers from Dark Forces and HK assassin droids from the Knights of the Old Republic series recently appeared in The Mandalorian, and the Republic Commandos have appeared in multiple animated shows.

However, if the Second Sister from Jedi Fallen Order is indeed going to be on the Obi-Wan Kenobi show, she will be the first proper game character to make the Force Jump to live-action. In yesterday’s short teaser for the show, which can be seen on Disney Plus, director Deborah Chow talks about “Jedi hunters” over a piece of concept art showing one of these Inquisitors emerging from a ship.

Eagle-eyed fans zoomed in on the figure in front, who clearly seems to be the Second Sister from Fallen Order – the red visor is particularly unique. The only problem with this is that timeline doesn’t quite match up – Fallen Order is five years after Revenge of the Sith but Obi-Wan is supposedly ten years after, and (spoiler alert) the Second Sister isn’t around beyond the events of the game. However, this moment could easily be from earlier if the show reveals what happened to Obi-Wan after Episode III.

Maybe its the 2nd sister? bc the character on there seems to have a red visor? pic.twitter.com/55vD691vji

As for Fallen Order’s Cal Kestis and the remaining characters, they should be back in a sequel which EA and Respawn are probably working on – it’s pretty much an open secret, even if it hasn’t been announced yet.