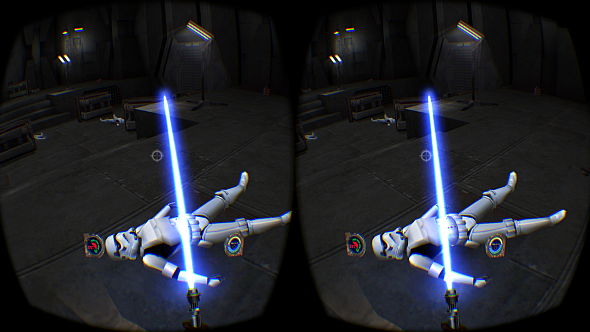 It’s become a bit of a cliche to suggest VR doesn’t yet have any system-selling games (let’s remind you that Rez Infinite just came to PC). A port of a fifteen-year old shooter probably won’t convince you to pick up a Rift, but if you already own one, it might be enough to make you dust it off.

If Half-Life can get on our list of the best shooters on PC then Jedi Outcast should. Hmph.

Jedi Knight II: Jedi Outcast was a real gem when it came out in 2002, boasting a terrific campaign, top-notch arena-style multiplayer, and lightsaber combat that arguably still hasn’t been bettered.

If you own a VR system and would like to try it again (or for the first time), now you can – thanks to modder Jochen Leopold. He released a VR version of Jedi Outcast a couple of days ago, which you can grab on GitHub here. Its more polished sequel, Jedi Academy, is also available. For more of Leopold’s work, check out his portfolio.

Sadly, Leopold isn’t sure he’ll be able to make the obvious addition of Oculus Touch support for some saber-swinging fun, according to VR Focus.

If you don’t have a headset but would like to try the originals, both Jedi Outcast and Jedi Academy are on Steam at £6.99 ($9.99). They’ve aged, obviously, but you can overlook that sort of thing then they’re worth a look.