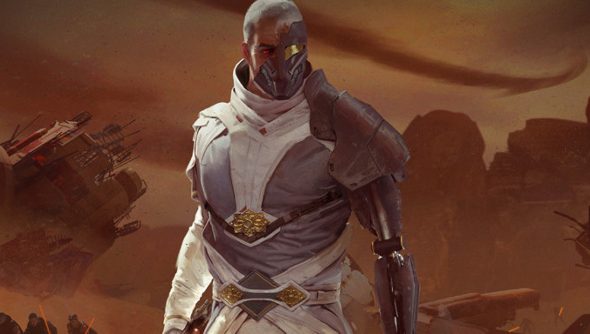 Star Wars: The Old Republic – Knights of the Fallen Empire, the BioWare MMO’s largest expansion so far, launches in a week, with early access for some subscribers kicking off today. Along with being the chunkiest update, it promises to be quite different from the previous major additions.

The galaxy will be catapulted forward five years – at least once you hit level 60 – where a whole new storyline will play out, surrounded by new characters and mechanics. It is, as it always is, a period of war, but this time both the Republic and the Empire are being threatened by a new group of party-poopers: the Eternal Empire.

Fancy losing yourself in a new MMO? Check out our list of the 10 best MMOs on PC. 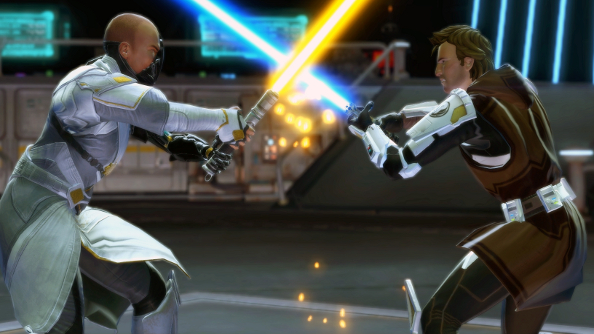 Long before the launch of Star Wars: The Old Republic, BioWare found themselves defending their choice of the MMO genre for a series that had previously been strictly single-player. 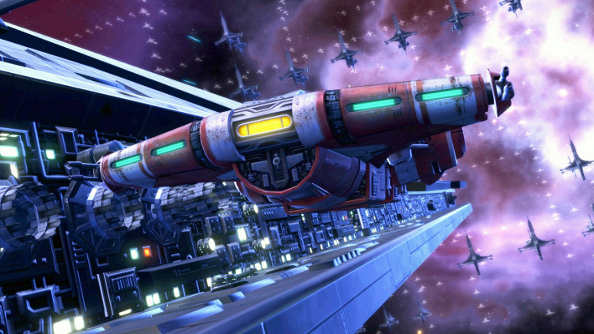 Mountains of filler kill and fetch quests dotted each world, while progress would halt while groups were searched for to take on Heroic missions and Flashpoints, the MMO’s dungeons. This, of course, is par for the course and expected in an MMO, but it’s worlds apart from the single-player KotOR experience.

Knights of the Fallen Empire, then, is a potential course correction, steering the game toward that old pre-launch promise. It’s a mostly single-player expansion, focusing on the adventures of the Outlander, once the hero of the Galactic War, now the one obstacle in the way of the Eternal Empire’s dominance.

It’s a “quintessential Star Wars story,” lead writer Charles Boyd tells me as he walks me through an early key decision in the expansion. And it’s a “return to BioWare story telling in a galaxy far far away,” executive producer Bruce Maclean chimes in. The Empire Strikes Back and Mass Effect 2’s names are dropped, setting the bar very high indeed.

BioWare RPGs have always been about gathering a party to stop a great evil, but it was in Mass Effect 2 where that became the real focus, demanding that Shepard put together a team of aliens and humans, somehow getting them all to agree to go on an impossible suicide mission. That’s what Knights of the Fallen Empire, BioWare hope, is a return to. 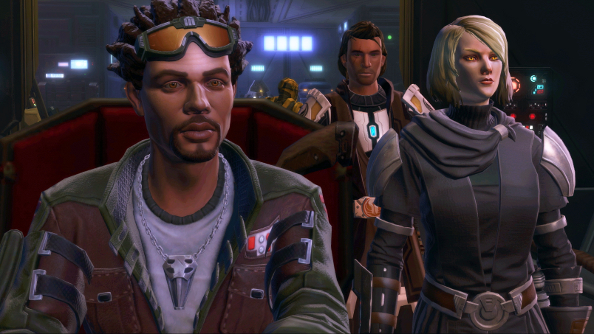 The companions of the pre-KoFE chapters often seemed to exist separate from each other, rarely interacting or acting like an actual group. While watching a major moment from early in the expansion, it struck me that this new ragtag group of heroes and villains (which actually contains some familiar faces as well) were refreshingly different, seeming to be more involved and actually working together.

One of BioWare’s traditional ‘big decisions’ forces the Outlander to side with one or the other of his new companions, which not only has much larger story ramifications than many of the decisions in the earlier chapters, but directly affects the opinion of both companions, and changes how the mission continues, opening some paths and closing others.

It’s far more cinematic than I expected, explosive and peppered with cutscenes that give both companions time to shine, rather than sidelining them in favour of the player-character, or just focusing on the one that the Outlander actually has in his party.

The role of your NPC chums seems to have been greatly expanded beyond their participation in the story, as well. No longer are they either combat companions or crafting minions – they have other uses in KoFE. Take Flashpoints, for instance. Six new Flashpoints are making their way into the game, and allies will be able to get their hands dirty in new ways. 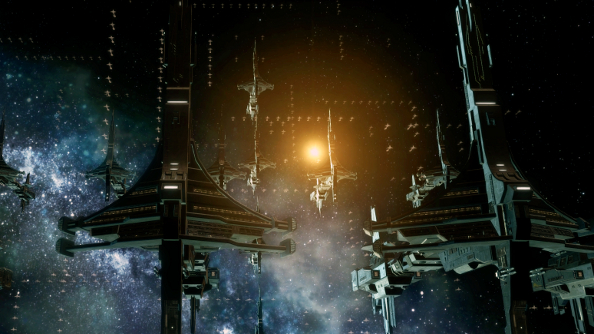 When you get inside a Star Fortress – each Flashpoint takes place on a different floating citadel, influenced by the worlds they orbit – you’ll get backup both in the form of fighting companions and pals who will help you from the safety of the shuttle, providing intelligence and even doing a spot of slicing, the Star Wars galaxy’s name for hacking.

Just as older Flashpoints will be made available for solo players, the Star Fortresses will let you decide to tackle them as a group or on your own. In each one, the Outlander will have to fight their way to the Star Fortress core.

“At the beating heart of each star fortress is a massive sun reactor,” senior designer Michael Ammer explains. There, the Outlander will face the base’s Exarch, a boss who draws its power from the sun reactor. BioWare showed off said fight, which took place on a crumbling platform as the fortress fell apart around the combatants. Like the cutscenes, these fights have a bit more sizzle than your run of the mill Old Republic scraps.

“We really believe Star Fortress is our best flashpoint to date,” Ammer says, proudly, when the demo ends. 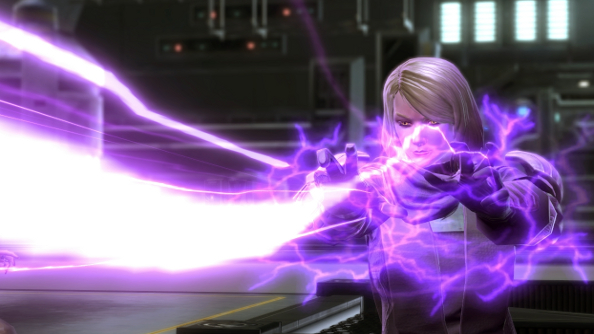 There’s an effort, I think, being made to solve what has always been a problem with games that make everyone a hero and then get them to play together: the power fantasy is quickly diminished by making you hero #2672. Key to this is the alliance that the Outlander needs to build in order to defeat the Eternal Emperor, KotFE’s Big Bad. It’s evocative of Dragon Age: Inquisition, and maybe a little like Warlords of Draenor’s Garrisons.

This alliance is, unsurprisingly, inspired by the plucky Rebel Alliance of the films – unlikely allies forced together to fight something big and nasty. Key players in the alliance include a Hutt that maybe wants to dissect you, an ex-Republic commando, a force-loving mystic, and a scruffy smuggler, but it will be up to players themselves to recruit more.

Missions will crop up tasking you with finding a new friend, but such meetings don’t always end well. You’re not just looking for likeminded folk – a Jedi might seek out an old Imperial for help because desperate times and all that. These missions, however, let players make the ultimate choice.

“You can even fight them to the death,” Boyd tells me, “if you’re opposed to them.” And even if you do decide to recruit someone, there’s no guarantee that they won’t eventually betray you and become an enemy. 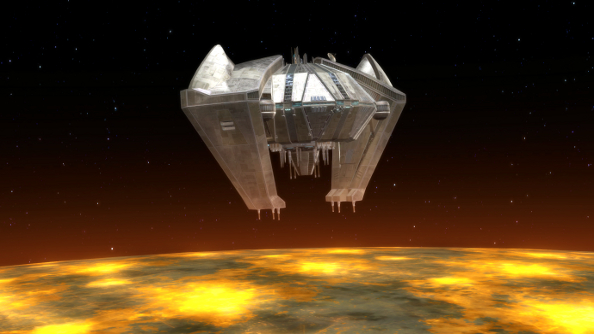 “It is very much an [MMO], and playing with your friends is very much part of the experience,” Maclean emphasised when I asked how much of an MMO is was if there’s such a single-player focus. This is down to changes that are being made to the pre-60 content.

Say you’ve got a group of Imp chums wanting to tackle a level 40 Flashpoint that you’ve never done before, but now you’re 62 and there’s be no real point. That’s a worry of the past, apparently. With KotFE, BioWare is introducing level scaling, letting players join up with a team of low level friends and still get something out of it. The group finder’s being tweaked to boot, which promises to make it easier to find groups.

“We’ve embraced the strength of our MMO roots and improved them across the board,” says Maclean. That’s mostly going to affect older content, though, and there was never any doubt that pre-KotFE Old Republic was an MMO.

It all seems like such a departure from the last three years of The Old Republic – more a sequel in expansion form. I do wonder if BioWare is trying to cram its square single-player experience into a round, MMO hole. It seems bold, at least; an experimental new leaf that, on paper, does sound a lot like what people actually wanted back when the game was first revealed.