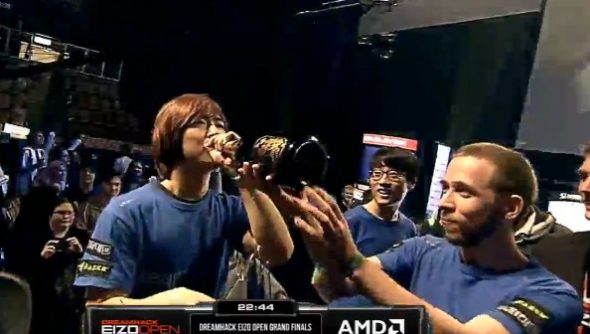 How bad was HerO’s beat-down of his teammate TaeJa in the DreamHack Winter StarCraft 2 final? Afterwards, as my friends and I sat staring at the screen where the returning champion HerO was being soundly defeated by a champagne cork, one of my friends turned to me and asked, “Was that a thrown match we just saw?”

For the record, nobody at my DreamHack viewing party seriously thought that Yoon “TaeJa” Young Suh or Song “HerO” Hyeon Deok, or anyone from Team Liquid for that matter, would intentionally fix or throw a championship match. But it was also hard to believe, after the normally-superb TaeJa was beaten soundly in four straight games, that he’d contested the DreamHack Winter title nearly as intensely as he had the DreamHack Valencia title or any of his GSL attempts. For one of the world’s top Terrans to lose to his teammate’s Stalker compositions in every game beggared belief.

It was a damp squib of an ending to a DreamHack season-capper that struggled to find its drama on its final day. With the exception of a fantastic quarterfinal between Evil Geniuses’ ThorZaIN and TaeJa that went to five games and a nearly as hard-fought series between NaNiwa and Monchi, the last day of the StarCraft 2 tournament was one lopsided match after another.

Polish Zerg Nerchio wiped out his countryman MaNa 3-0 in the quarterfinals while HerO did the same to fellow-Protoss Snute, who fought HerO hard in their first game on Cloud Kingdom prior to a late-game implosion followed by two decisive losses. Johann “NaNiwa” Lucchesi, meanwhile, had a back-and-forth series against Austria’s Philipp “monchi” Simon, including a no-base Game 2 where monchi used force fields long enough to pin NaNiwa’s blink Stalker force in place long enough to inflict game-winning damage. After the quarterfinals, however, TaeJa blanked Nerchio 3-0 while HerO took out monchi 3-1 before the two teammates faced each other in the final. Unfortunately, TaeJa failed to bring his A-game and even his B and C games seemed to be missing action while he fed Marines and Siege Tanks into HerO’s Stalkers and Sentries. He looked impatient and sloppy, while the judgment and deliberation that gave him his victories at Valencia were nowhere to be seen.

It was a dispiriting finale, especially coming on the heels of yet another lopsided Counter-Strike: Global Offensive final where NiP (Ninjas in Pyjamas) obliterated VeryGames in a 16-1 final match. While the final results may not have been a surprise (NiP are effectively unstoppable in CS and were for years prior to Global Offensive), VeryGames’ complete undressing dashed any hopes of drama, much less an upset.

Yesterday’s League of Legends final between Fnatic and CLG.EU may have been the dramatic high point of the tournament, with Fnatic coming from behind to win the final best of three and the $18,500 grand prize. It was not the most competitive field we’ve seen for LoL lately, but the final at least yielded up a surprise as CLG’s dominant European squad were unable to seal the deal in a tournament that looked like theirs to lose.

The final match of DreamHack Winter 2012 belonged to Dota 2, and the Evil Geniuses team against No Tidehunter (nth), a fairly new European team formed from veteran players. While EG were able to establish an early lead, and looked like the surprise of the tournament after beating Na’Vi’s elite Dota 2 squad, nth were able to come back from EG’s Game 1 victory to take the tournament’s top Dota honors.