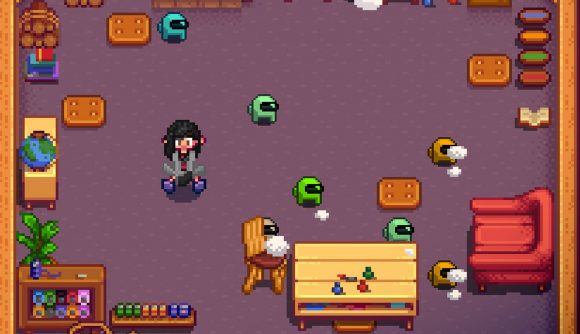 Ah, Junimos. Stardew Valley’s little multi-coloured forest spirits aren’t just massively talented carpenters, helping to restore the community centre and town to their former glory (for the right price, of course) – they’re also handy helpers on your farm if you get a Junimo Hut set up. But now, you can put a zany new spin on the critters thanks to a mod that swaps them out for a certain social deduction game’s spacefaring beans.

Miome’s ‘Crewmate Junimos’ Stardew Valley mod is simple in premise but highly entertaining in execution. As you can imagine, it’s a simple swap out that means the mini Junimos – which normally look little apples or fruits with stick arms that come in various different colours – instead become those distinctive armless, spacesuit-wearing beans from Innersloth’s popular ‘whodunit’ game Among Us. The good news is they’re equally dinky, as you can see in the image above.

They’re a great recreation of the originals, and from the mod’s image, it looks like they fit surprisingly well into ConcernedApe’s farming game. Sure, they seem to have drifted pretty far from their spaceship, but they look like they’re enjoying making themselves at home in the ol’ Valley.

If you’re keen to have teeny crewmates invade your Stardew Valley farm, you can find the mod on Nexus Mods here. As ever, mod with caution!

And, in other news, this week a chicken nugget that looked quite a bit like an Among Us crewmate sold for an eye-watering $99,997 (approximately $70,616) on eBay. Phwoar. It did come from a BTS Combo meal from McDonald’s, so perhaps that added some value.