Between PlayerUnknown’s Battlegrounds, Apex Legends, Fortnite, and a wealth of other battle royale games, there’s no escaping the kill-or-be-killed genre. Sure, there are the occasional outliers like Rocket League and Rainbow Six Siege here and there but even then we are talking about games built on action-packed competition.

There’s no time to slow down and smell the flowers. Where do you go to hang out and chill with people online? Well, that is exactly where Stardew Valley’s multiplayer blooms.

The lack of a multiplayer mode was one of the few shortcomings of Stardew Valley when it launched in 2016. Eric “Concerned Ape” Barone’s take on the Harvest Moon series seemed tailor-made for having online players join together to tend to crops and then reflect on the day’s work in the nearby village saloon.

Fans set out to fill the glaring hole in the game’s feature list by creating a Stardew Valley multiplayer mod and, since the game’s 1.3 update, multiplayer has become a part of the base game – and fans are loving it.

What other fan made creations could be developed into Stardew Valley? Check out our Stardew mod mega list to see what the game's dedicated community has been creating, from making farm life easier with cheats to visual overhauls that can turn your farm into a pixelated fairytale.

Although farm life in reality is far from relaxing – as we found out first hand when we asked a real farmer – Stardew Valley’s multiplayer mode is a place where you and your farming friends can kick back together online. In the multiplayer mode, you can build up to three cabins on your farm that each house a farmhand. These three farmhands can be controlled by your friends, meaning they can help you out as you farm, mine, fish, fight, forage, and marry other characters – they can do basically everything you can.

Currently, the multiplayer mode still doesn’t support split-screen co-op or PvP meaning that your friends will need their own copy of the game, but even so – Stardew delivered on the most requested feature and it couldn’t have come at a better time. 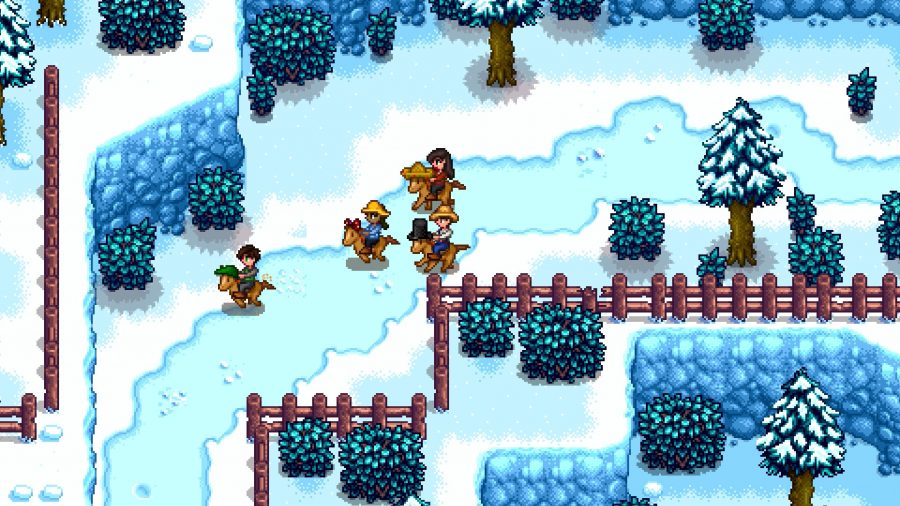 Stardew Valley multiplayer is now a major component of the game thanks, in part, to a dedicated community and its reactive creator. Concerned Ape’s ability to listen to the fans and react to them is one of the game’s strongest attributes.

Even better, Stardew’s recent update – version 1.4 – now lets players have separate money, something fans wishing to avoid the strictures of joint bank accounts have been calling for. And with Concerned Ape continuing to iron out all the multiplayer kinks in updates, Stardew’s multiplayer mode is shaping up to be the perfect torchbearer for relaxing online play.

Stardew Valley might very well become the torchbearer for a softer type of online play in PC gaming. We have seen, with the rise of PUBG, that all a trend needs to get started is one game to explode in popularity all of a sudden.

Stardew Valley’s multiplayer success is on the cusp of a relaxing renaissance, encouraging other game makers to try their luck with their own tranquil online co-op modes. Stardew Valley has already broken into the e-sports scene, so popularising relaxing online co-op doesn’t feel like a stretch.

Related: How to make money fast in Stardew Valley

There’s absolutely nothing wrong with Apex Legends and its counterparts in the battle royale genre, of course, but we could all do with some downtime, right? Shooting other people in the face is always fun – if you wanted a game that blends shooters and farming then Atomicrops is the Stardew Valley shooter you didn’t know you wanted – but games should offer us more than just that.

Perhaps it is time to give something else a go. Stardew Valley multiplayer is the alternative online mode we all need.