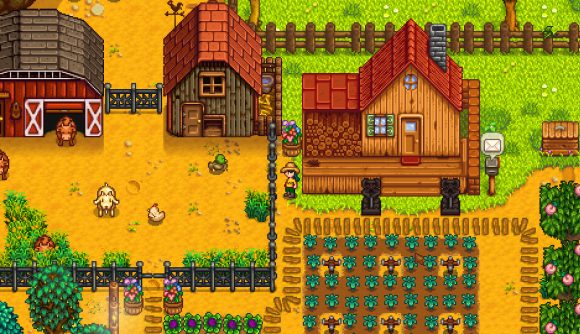 Stardew Valley is three years old now, but its creator is still hard at work on an update. Version 1.4 is coming sometime in the near future, and Eric “ConcernedApe” Barone has hinted at some of what it’ll contain in a recent post to Twitter.

“Hey everyone, just wanted to share this screenshot from the upcoming 1.4 update! It’s a big one & this image only reveals a fraction of what’s coming,” he wrote. “Featured here is a new farm map called Four Corners that’s perfect for the much requested ‘separate money’ option in multiplayer.”

The way Stardew Valley works normally, all players share the same big pot of money in multiplayer. That generally works fine for most circumstances, given Stardew Valley’s friendly nature and the cooperative way most people approach the game. But naturally, it does leave you open to certain kinds of inconveniences if you’re playing with someone who’s a bit more spendthrift than you are, or if players disagree on priorities for your farming communities, shall we say. Separate money has been something players have been asking for for a while now, so it’ll be a welcome addition to the multiplayer scene.

Here’s ConcernedApe’s tweet, along with the screenshot of Four Corners.

Hey everyone, just wanted to share this screenshot from the upcoming 1.4 update! It's a big one, & this image only reveals a fraction of what's coming. Featured here is a new farm map called Four Corners that's perfect for the much requested "separate money" option in multiplayer pic.twitter.com/wwI1nHWpvX

The shot shows what’s likely the center of the map, with a greenhouse and paved square in the middle. Differently-coloured chests have been placed on the square, along with a workbench.

Read more: How to make money fast in Stardew Valley

But perhaps more interesting for finance-minded players is the text in the bottom left corner. One line reads, “Buster has earned 1,000,000g on his own,” while another player, Mona, replies with three crying-face emoji. Splitting income sounds like it’ll be an option when the update arrives, so you’ll still be able to play normally if you prefer.

It’s not clear when exactly update 1.4 will roll out for Stardew Valley. Barone has been working on it for a while, and has put his next game on hold while he prepares this patch. As he says, it’s going to be a big one, so digital farmers around the world have plenty to look forward to in the coming months.