As we reported a few weeks back, Steam Big Picture mode is getting a redesign. Initially this was focused only on the Library section of the interface, but it has now been rolled out to the rest of it too, updating even the front page you see above. Like with the Library changes, I’m a big fan of what they’ve done and think it might now be a reasonable thing to use at your desk.

For those with their rig plugged into a TV – far more common than I thought – it seems like a very good option. Buttons are big, visible and obvious. You’ve got access to the three things you’re most likely to want to play immediately, rather than having to navigate sub-menus. What your mates are doing, what you were doing last and whatever it is you just bought – that’s got to cover about 95% of the games I play on Steam. There’s also been changes to the store page: 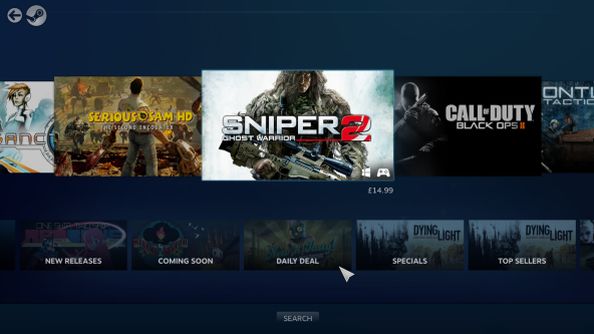 Again, this covers just about everything I’m interested in. I’ve found Steam’s recommendations to usually be accurate as far as stuff I’d like to play goes, so happy for those to take up the big boxes. The bottom row covers everything that the normal Steam interface does across a few tabs, including giving pride of place to the Daily Deal, clearly the most popular way games are regularly bought through the service.

It’s still not the best with mouse and keyboard, as navigating through various pages taking these screenshots was a bit more hassle than it was worth, but that’s not what it’s designed for and the basic Steam interface does a good job of that anyway. The community page… 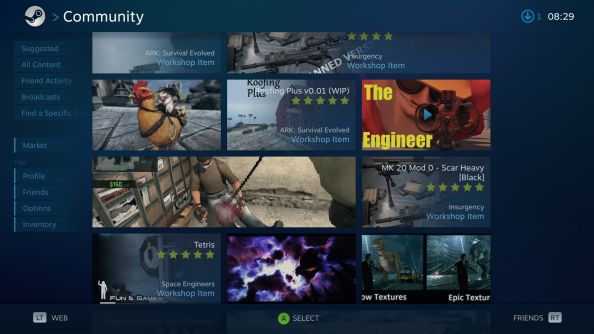 …was particulary cumbersome, but again has immediacy to it that the base client lacks, immediately showing you the things you want to see with options to navigate. I’m interested to see what happens if and when some changes come to the M&K version of the client and what inspiration they’ll be taking from this. On that note, wanting to pretty-up Steam? Here’s a round up of all the best Steam skins.

Anyone out there a regular Big Picture user? What do you think of the changes?