Deep within the Steam Client beta, underneath a pile of old newspapers and next to calendar with the Half Life 3 release date scrawled in the margins, are designs for an updated version of the Steam controller.

Back when Valve first revealed their Steam Machines they showed off a controller with two haptic feedback pads and very few buttons. The latest design shows how much they’ve iterated.

The Steam Machines’ release has been delayed into 2015 but it’s given Valve a lot more time to work on their controller. This began with a growth of buttons between the two haptic thumbpads, then the sprouting of an analogue stick, and now, finally, a directional crosshatch for left haptic pad. 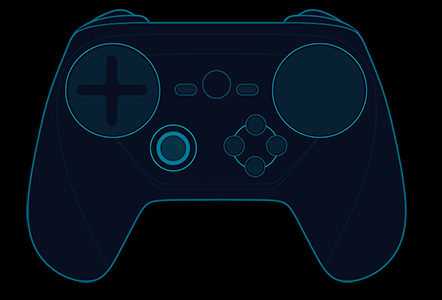 The new D Pad design for the left thumbpad may be largely cosmetic or it might reveal that Valve have made it easier to press the pad in those primary top,down, left, right directions.

Valvetime found the file deep within the Steam Client and say they “imagine the left pad may now feature as a softer, more diverse alternative to the standard D Pad by offering more directional input than just the standard four-points of motion.”

Valve have said that the Steam Machines will be featuring heavily at the GDC 2015 conference in March.