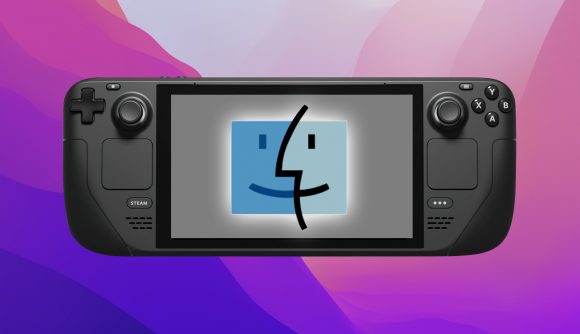 Step aside Windows 11, a vintage computer enthusiast has transformed the Steam Deck into a retro Hackintosh handheld by installing Apple macOS 7. MigaIsNotACat demonstrates the 90s operating system running on the portable powerhouse in a Twitter video, and you don’t even have to get rid of SteamOS to experience the nostalgia.

Miga’s Steam Deck macOS mashup idea has actually been a long time in the making, as the tinkerer promised he’d put System 7.1 on the device back in 2021. Now that the vintage tech lover has got his hands on the handheld, he says he may well be the first person to run the 90s Apple operating system on the Deck while lacing the claims with an unapologetic “no, I’m not sorry” note.

While you’d think it’d be easier to install Windows 11 on your Steam Deck, the fact you can launch macOS 7 using the handheld’s interface says otherwise. It’s worth noting that Windows also isn’t quite as good as SteamOS on the handheld, so unless the ability to dual boot shows up soon, you’re better off sticking with the Deck’s default.

It’s needless to say that running macOS on your Steam Deck isn’t going to enhance its gaming PC abilities. That said, seeing the portable become a portal to the past is very cool, and it’s a great way to experience a snippet of tech history without getting hold of a classic Macintosh PC.

Here's a short video of it running from the Steam Deck UI. pic.twitter.com/59YTpXZZVY

Steam Deck Q2 preorders are still making their way to eager enthusiasts, but the steady rollout seems to be progressing without a hitch. That said, while Valve’s take on portability continues to prove popular, Ayaneo is planning to release an OLED handheld gaming PC that could challenge both the Deck and the Nintendo Switch.