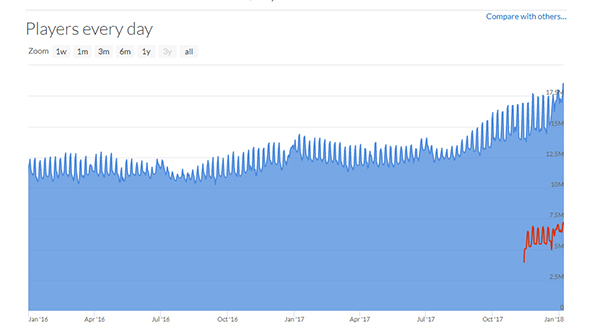 A year ago, Steam hit a new record concurrent user count, and Valve have done it again at the start of 2018. A new all-time peak of 18,522,222 players occurred two days ago, capping off a thoroughly impressive 2017 for the platform. The record set last January was 14,147,000, so millions more have hopped aboard the Steam train for an increase of nearly 31%. In-game users reached a record of 7,188,164 on the same day.

Want to be a number in the next record? Fire up one of the best free games on Steam.

Concurrent peaks had been steadily growing since the middle of 2017, owing no small debt to the success of PlayerUnknown’s Battlegrounds, particularly in China. SteamDB’s charts show particular growth for Steam since the late summer months, which basically coincides with the point at which PUBG went from “hit” to “certified phenomenon.”

PUBG’s current peak record is 3,138,533, which just so happened to also occur on January 6. Other top games contributing to the peak include old standbys like Dota 2, Counter-Strike: Global Offensive, and Grand Theft Auto V, as well as old titles that’ve gotten new lives like Rainbow Six Siege and Warframe. And, of course, the thousands upon thousands of other games on Steam.

Even if the scale of the increase is largely driven by a single title, it’s still an impressive year for Valve, and great news for the continued popularity and support of PC gaming.