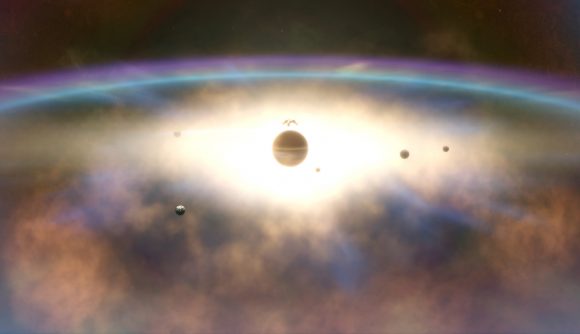 That update has been revealed as patch 3.0 ‘Dick’ – named after renowned science-fiction author Phillip K. Dick – and is meant to represent another major shift in Stellaris’ life-cycle. This is much like how the Apocalypse expansion ushered in a new era alongside the 2.0 ‘Cherryh’ update. In today’s dev diary, the team also went into more detail regarding what features are coming in the free patch, as well as any changes already announced features have undergone since they were originally previewed in past diaries.

The basic espionage system has now been confirmed as a free feature, along with the intel system, and the ‘gather intelligence’ operation. Other operations, such as arming rebels, will be part of the Nemesis expansion. The espionage system itself has also undergone some changes. Certain elements have been renamed or simplified, and you can now only launch one operation at a time on a single empire.

There have been other minor tweaks to things like first contact, and the outliner has been given a quality of life pass. The current list of Patch 3.0 ‘Dick’ feature highlights include:

We’ll have to wait for the full patch notes to get a complete picture. Traditionally, these will drop in the dev diary prior to release.

More like this: Read our complete guide to Stellaris DLC

Stellaris: Nemesis and the 3.0 update will release next month on April 15, but for a limited time, you can grab the core game for just $1 from the Humble store.