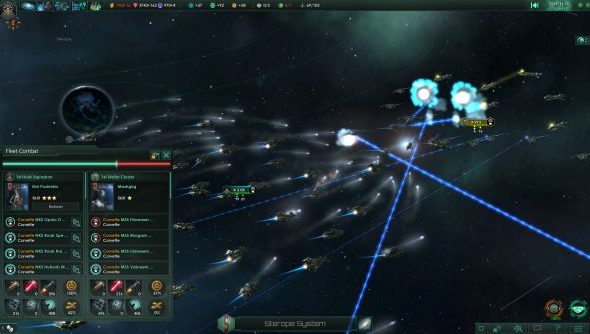 Stellaris is out. We like it, you lot have basically all bought it, and now Paradox are fixing it. It’s not been the most cataclysmic launch in PC gaming history, but the swarm of 4X-fans fixating on their new obsession meant bugs were found quickly. A particularly nasty amount of stuttering could occur on certain machines, as well as various crashes.

Don’t want it in space? Try one of the other best strategy games.

Project lead Rikard Åslund also notes that they’re getting there on a second hotfix for more bugs and stability issues. They’ve also started work on the first major patch – balance tweaks and extras, we assume – but Åslund doesn’t have a date on that yet.

Meanwhile on Twitter, Daniel Eriksson, a programmer on Stellaris, shared this tidbit as context for why Quality Assurance can’t catch everything:

Fun fact: during the first hour after release you players spent more time in @StellarisGame than a full-time QA-team of 10 would in 3 years

For math fans, that’s about 62,610 hours, or roughly how long I’ve spent thinking on how great spaceships are. Whose been playing Stellaris? Tell us your successful space-tales below.