Hello and welcome to my regular column all about having sex with lots of men in videogames. I am the author of this column, Steve Hogarty, a man whose sexual exploits are known to many yet understood by few. I am a wizard of sex. I can conjure up great sex by waving my magic arms above my head and chanting the ancient sex words taught to me by a millenia-old warlock.

But now I am uniquely qualified to write about videogames in which you have lots of sex with men. You may think that I am arrogant. No way. In fact, I am deeply humble about all of the great sex that I have had and am having. I am perhaps the most humble good-sex-having person around, and I am now willing to freely share all of my wet secrets with you, the thirsty reader.

Warning: This column contains references to the awful thing that is sex.

I have never wanked off a car, but I imagine it would work a little bit like it does inStick Shift, a game in which you drive around, merrily wanking off a car.

“But wait,” you shriek at me down your fibre-optic cables, “car is not men.“

Correct. Stick Shift isn’t about having sex with a man, but rather it’s about having sex with acar. Cars, as we were taught in school, are genderless machines, though they do readily embody some of the characteristics of personhood. We project on to them different and distinct personalities and foibles, even changing moods and temperaments. We form relationships with cars in a way we do not with any other kind of machine. The empathic character of a car seems innate and objective and real to us. It is not justplayfulto view a car as human, but somehow natural and truthful. These are objects over which we exert our mastery and control, but ones that can defy and taunt us as a lover might. To drive them is to be utterly vulnerable, to control them is to be nakedly organic, and to enter them is to be submissive to their metallic whim, their steely caprice.

Also, the gearstick in most cars looks a lot like a penis, so why not.

Furthering the case for Stick Shift’s inclusion in my column about having sex with lots of men in videogames is the fact that there’s also a man involved here. This dozy looking guy, who has clearly downed a big old pint of cool sex drugs just prior to jumping in the driver’s seat. Which would explain why he’s cheerfully wanking off his car. 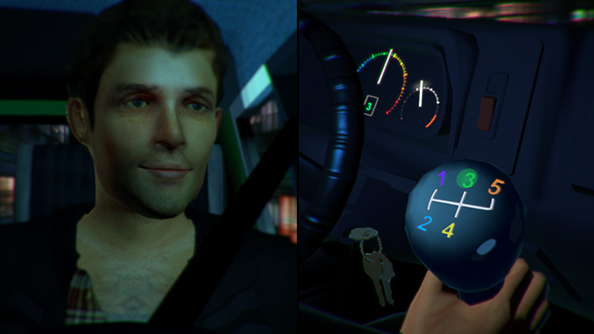 Here is how the game works. You are in control of the driver of the car, whose right hand is gripped tightly around the shaft of the gearstick. You can move your clenched fist up and down the gearstick by slowly pushing your mouse up and down. With each stroke of the car’s gearstick the engine revs faster and faster, purring at first, then growling as you gradually increase the speed of your strokes. The engine starts to roar as it reaches the gear’s redline, at which point you must hold down the left mouse button and carefully shift into a higher gear.

Doing this causes the driver to shudder with uninhibited sexual delight as a wave of a human-on-car fuckery seems to wash over him, his own eyes beaming like headlights as he gasps in bleary euphoria. Failing to shift up a gear in time however causes the car to stall, at which point you must restart the entire process by turning the key in the ignition and starting again from first gear. I’m not sure that there’s an analogue for that kind of setback in real-life sex. A badly maintained tempo while masturbating one’s self or one’s partner can be unhelpful in reaching spunktown, yes, but rarely does it mean you both have to get dressed and start again from square one.

That said, Stick Shift is not supposed to be a pure analogue of our disgusting human sex. It is auto-erotic. It is car-fucks. The gearstick’s shiny knob pulses invitingly with each stroke, like a farm hand’s turgid bell-end, but it is still a gearstick. 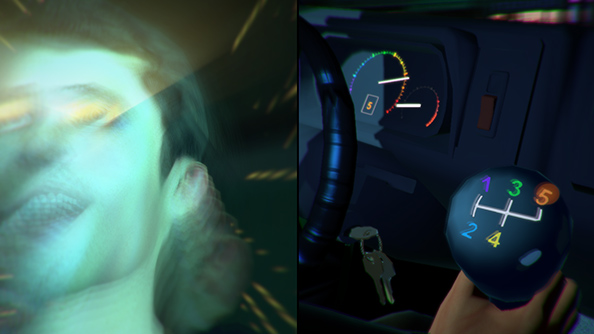 One of the game’s endings has you shift into a climactic sixth gear, triggering a sort of mind-smearing homo-cargasm that even the raciest of road safety videos never warned you about. After that, the car is parked and the driver is seen relaxing with a cigarette. You can loll his head back and forth using the mouse, watching the man’s blissful, post-coital grin as it limply grips the smouldering fag, the smoke of which curls and snakes up towards the car’s ceiling. On the right hand side of the screen the car’s exhaust can be seen, limp and occasionally twitching, while dripping a sticky puddle on the tarmac. You must wait 15 minutes before either of you are ready to go again.

(I once had a sixth gear in a diesel-engine Toyota Avensis that I drove to Wimpole Estate in Cambridgeshire. Contrary to what Stick Shift would suggest, entering this uppermost gear didn’t cause all of the men in the car to simultaneously shoot hot spunky ribbons all over the car’s ceiling — thankfully, as I would’ve lost my deposit with Enterprise Rentals. In reality it is a very boring gear, one that you’d only ever use during the most tedious stretches of empty motorway. Your fuel efficiency improves, sure, but drop down to fifth if you plan on actually overtaking anything in a hurry.)

I’m not sure what else to say about the car sex game now. 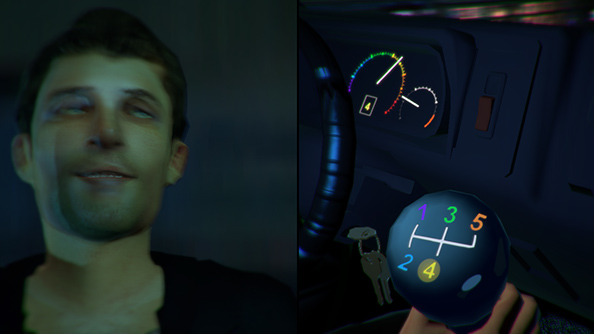 In truth, Stick Shift is not very challenging or especially fun to play. But the game’s author, Robert Yang, is an intelligent man who set out to make a real point about LGBT rights and activism. You should definitelygo read his blog post about the meaning and underlying message behind his ridiculous gay car sex game. And then you should consider whatever it is that I think I’m doing, critiquing a game that’s already entirely self-aware, funny and more self-parodying than my write-up could ever be. Robert Yang is so clever and probably handsome and I don’t deserve to write about his gay car sex game.

Yang writes about the game’s second ending, which occurs 48% of the time, in which you are stopped and detained by two heavily armed policemen. The chance of reaching this ending isn’t arbitrary, rather it reflects a 2013 study claiming that 48% of LGBT men and women had experienced police misconduct in their encounters and interactions with the police. You have no control over which ending you get, just as those who find themselves at the receiving end of police mistreatment have no control over their own circumstances.

Previously on Having Lots of Sex with Men in Videogames…
Part One: No, Thank You!!!
Part Two: Coming Out On Top