The Intel Skylake-X platform has had a difficult beginning. It was launched with a genuinely impressive decacore CPU, the Core i9 7900X, but with AMD’s mega-core Threadripper hanging over its head, and the rushed launch of Intel’s Coffee Lake, Skylake-X has struggled to get a lot of attention. Which is a shame, because with boards like the Asus STRIX X299-E Gaming it’s got a lot to offer.

Check out the best CPUs for gaming on the market today.

The X299-E Gaming is a $320 (£289) motherboard for Intel’s Skylake-X platform, with all the flashy LEDs, myriad connections, and robust componentry that we’ve come to associate with Asus’ STRIX range of motherboards.

It’s not the sort of server-level board you’ll get from the Prime X299 Deluxe, or the extreme overclocking ROG Rampage VI Apex, but the STRIX aims to deliver a gamer’s board with a decent mix of gaming performance, overclocking potential, and computational grunt, but with a more reasonable price tag.

Of course the most important feature is the fact it’s rocking the Aura Sync RGB LED technology. That’s what’s going to make your PC run faster, like painting stripes down the side of your car. Inevitably it’s got the LED headers on the board so you can link up all your RGB strips in one fluid stream of rainbow goodness. 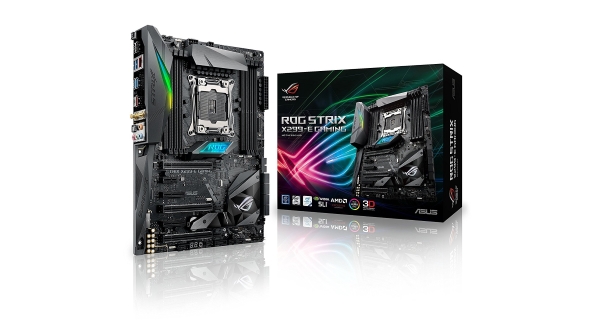 Obviously playing second fiddle to the RGB fun is the level of protection Asus are trying to afford your admittedly still rather expensive motherboard. There’s armour arrayed around the PCIe slots to make them more sturdy when mounted vertically with a heavy ol’ graphics card weighing them down. And with three full x16 slots – and an appropriately beefy X-series processor – you can get them all filled with graphics cards for a mighty gaming array. With a pair of GPUs you’ll get them both operating using all 16 lanes, but if you add another into the mix (you mad fool) then that will sadly have to make do with eight lanes.

Because it’s not one of the monstrous Rampage or Deluxe boards you’re not going to have the same level of USB support from the rather sparse back panel. Surprisingly there are only a handful of sockets – a pair of USB 2.0, four USB 3.1 Gen 1, and one USB 3.1 Gen 2 Type-A and one Type-C. You’ll want a chassis with a host of ports on the front panel to make use of the various extra headers on the board itself or you’re going to run out of USB ports rather quickly.

Asus’ SupremeFX audio is very much in attendance too, with a fully shielded design, keeping it separate from the potentially noisy components on the main board. It’s also been designed to be capable of driving the best gaming headsets from the front panel of your case with a pair of dedicated op-amps. 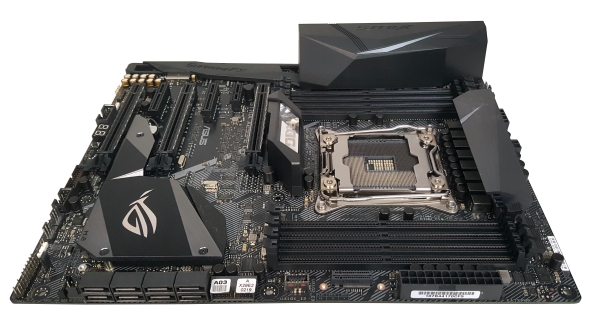 But it’s the performance of the board which is what we’re really here for, and unfortunately that’s a bit of a mixed bag. In a bit of a switcheroo compared with the Coffee Lake motherboards it’s the MSI X299 Gaming M7 ACK which is the one pushing Intel’s Core i9 silicon to its fullest. The MSI board runs the i9 7900X at 4.3GHz out of the box, while the Asus STRIX sticks to the 4GHz standard.

That means its CPU performance is a little off by comparison as are its 3DMark index scores. On the gaming front, however, it’s a little more random. The Asus manages slightly better Hitman and Civilization VI frame rates than the Gaming M7, but with Total War it’s a long way behind the MSI. That said it manages to run a lot cooler and without chowing down on so much raw power too.

The improved thermal and power performance of the board doesn’t mean you’re going to get more out of the STRIX in the overclocking stakes – our i9 7900X resolutely refuses to go faster than 4.7GHz – but once there it does outperform the MSI board quite considerably. It’s obviously faster in the Cinebench CPU stakes and hoses the MSI in the Civilization VI benchmark too.

So, in order to get the most out of the STRIX you’re going to need to tweak your CPU to get there. But considering it’s quite a bit cheaper than the $366(£348) that’s not too much of a concession to make. You might not like the thought of immediately straining your expensive new Core i9 CPU, but given the lower temperatures of the Asus STRIX board I wouldn’t worry overmuch about overclocking taking too much of a toll on the Skylake-X silicon.