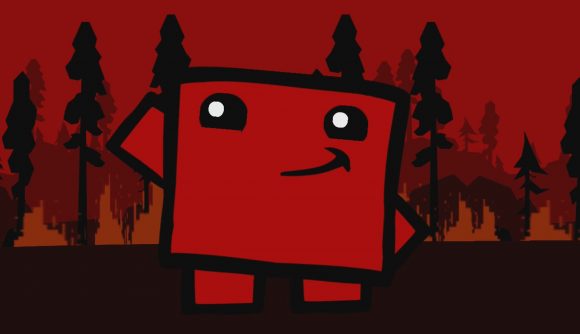 Super Meat Boy is yours to keep if you pick it up on the Epic Games store at its current discounted price of zero dollars. What a bargain. Team Meat’s classic hardcore 2D platformer will be free on Epic’s store until January 10, 2019.

This is the second game that has been available on the Epic Games store for free since it launched earlier this December. The first game was first-person underwatch survival game Subnautica, which is now no longer free, so if you missed it you’ll just have to pay the full price. Don’t worry, though, as the game is well worth the entry fee.

Subnautica and Super Meat Boy are part of what should be a long-running promotion on the Epic Game store which sees a game being offered for free on the platform every two weeks. So, when January 10 rolls around, Super Meat Boy will go back up to full price, and then another game will be available for free for the following two weeks. Pretty sweet deal, huh?

If you’re not familiar, Super Meat Boy is a 2D platform game about a man made of red flesh who sets out to get back his love Bandage Girl after she’s been kidnapped. A fetus in a robot suit who goes by the name Dr. Fetus is the villain here.

Read more: Find something for you in the best indie games on PC

If you like to test the dexterity of your thumbs through regular platformer challenges then Super Meat Boy will be right up your street. Be warned, through: there’s no easy mode like there is in Celeste for you to fall back on here. It’s hardcore or nothing.

It’s worth noting that this is a good chance to get familiar with Super Meat Boy if you aren’t already as a new game in the series called Super Meat Boy Forever is coming to the Epic Games store in April 2019.