July 16, 2021 Pricing in Euros for the Surefire GX3 has been updated to reflect taxes

Surefire might not be a name you're familiar with, but you're in good hands as the brand is Verbatim's gaming subsidiary that's trying to inject some style into an otherwise bland-looking external SSD market. The Surefire GX3 isn't quite as flashy as Adata's SE900G, but stands out with its RGB lighting and digital camouflage. It's not the fastest external SSD around being SATA-based rather than NVMe, but it's still priced pretty near to similarly-performing models.

With an increasing number of developers now recommending gaming SSDs for the best in-game performance, they're becoming less of an optional upgrade and more of a necessity. However, if you don't want to tinker with the inside of your gaming PC or you can't replace your laptop's internal storage, external SSDs are a solid alternative.

The drive boasts rated sequential read and write speeds of 450MB/s and 430MB/s respectively, which falls behind the quadruple figures of an NVMe, but is still no slouch compared to a mechanical hard drive.

You won’t need a Thunderbolt connection to make use of the GX3, which uses a Type-A USB 3.2 Gen 1 cable rated at 5GB/s of bandwidth. There’s a USB-C adapter in the box, too, making it quite a versatile beast if you don’t end up misplacing it. 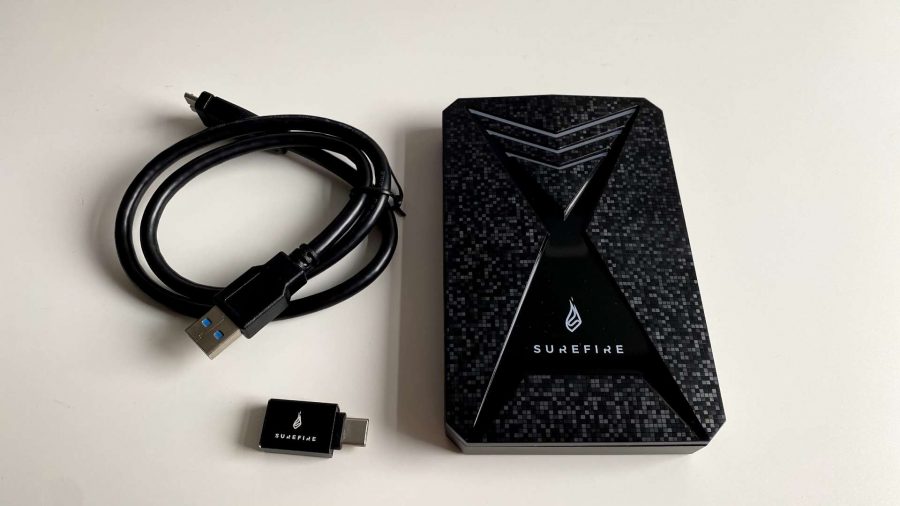 Coming in at 12.5cm in length and 8cm in width, it’s a little larger than some of the other external SSDs on the market, such as the Sandisk Extreme Portable. It’s not bigger than your smartphone, though, so it’s more than compact enough to chuck into a travel bag with the best gaming laptop. 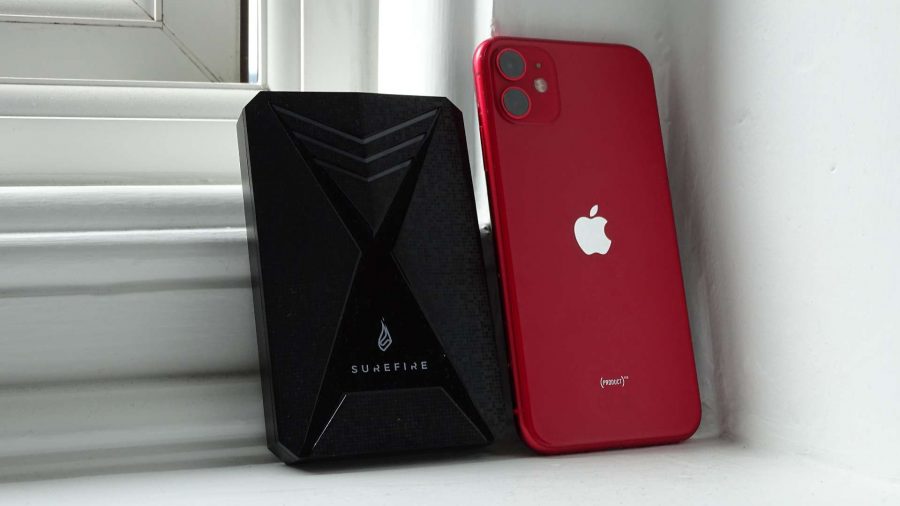 The three stripes of RGB lighting on the top of the drive add some gaming flair and flash to indicate when the device is in action. Since there’s no software with the GX3, however, you can’t customise or disable it, which makes the flashing lights a little jarring in a dark room.

The Surefire GX3 gets pretty close to its rated speeds in synthetic benchmarks, hitting average sequential read and write speeds of 425.6MB/s and 410.7MB/s across our two benchmarking programs.

Just like with CPUs or GPUs, synthetic benchmarks are not the most accurate measure of a drive’s performance and should be taken with a pinch of salt. For something more true to life, we need to see how the drive performs in games and file transfers.

Note: There are other factors that contribute to the time it takes to load into a game, such as partner logos and health warnings flashing on screen, the synchronisation to the cloud, DLC checks, and connecting to servers.

The drive is noticeably faster than the loading times on a hard drive, particularly in demanding titles. Microsoft Flight Simulator is very taxing on storage drives, and the GX3 performed relatively well here, taking 231 seconds to load into the game. You can still save nearly a minute of your time if you’re willing to pay for a more expensive NVMe device, but comparatively speaking, the GX3’s value wins out here.

It manages to transfer a 30GB file in 81 seconds, which isn’t anything to write home about. In fact, it’s lower than our synthetic tests – and by extension, its rated speeds – at 385MB/s.

Under both tests, the GX3 was hot-to-the-touch at 48°C, but this isn’t out of the ordinary when pushing a drive to its limits. Thermal throttling wasn’t a problem, either, with the GX3 hovering close enough to its rated speeds. 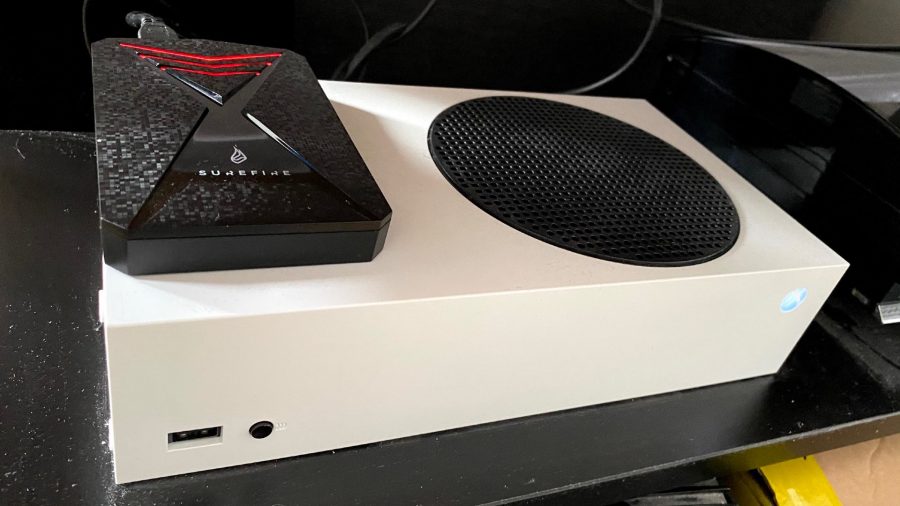 The Surefire GX3 is also compatible with any console that supports external storage devices. I couldn’t test it with a PlayStation 5 or older generations, but it worked flawlessly with the Xbox Series S following a quick reformatting. While you can store Series X / S exclusive games onto external storage, you can’t play them directly from the drive unless you own Seagate’s proprietary SSD. You can play Xbox One and 360 games on this drive and still benefit from the quick resume technology, though.

The GX3 is a solid drive that comes pretty close to its claimed speeds in testing, but dips a little when shifting files around. So, while it isn’t the best external SSD in the world, it still offers significantly better loading times than a hard drive in the best PC games, although its value for money varies depending on where you are. The 1TB model comes in at £0.13 / €0.15 per GB, compared to £0.11 / €0.12 per GB on Crucial’s 1TB X6. Even so, it could be a small premium worth paying for the smarter design, and it still offers a better value than Samsung’s T5 model, which costs £0.15 per GB.

The Surefire GX3 has top speeds for a SATA-based external SSD, but there are cheaper options if you can do without the gaming aesthetic.