External SSDs are a dime a dozen, and while they're a great way to back up all your important documents, they usually take a back seat when it comes to PC gaming. Enter the GigaDrive Pro, a new generation of storage that claims to be the “world's fastest external SSD” with rated speeds that can go toe-to-toe with the best SSD for gaming.

You might not have heard of GigaSSD, the startup company behind the GigaDrive Pro, but it's beaten Samsung, Crucial, and WD to the punch with the first Thunderbolt 4 / USB 4 drive – well, kind of. Since it's only available on Indiegogo at the moment, the GigaDrive Pro is still in its pre-order stage rather than a fully released product, and crowdfunding platforms aren't like most marketplaces.

In fact, you'd be forgiven for thinking that the GigaDrive Pro looks a little too good to be true. After all, it has 1TB, 2TB, 4TB, and 8TB models to choose from, an impressive 2800MB/s rated read speed, and up to 2500MB/s write speeds, which eclipses external alternatives and even knocks the WD Blue SN550 down a peg.

The GigaDrive Pro is built to be pocket-sized at 114mm long, 37mm wide, and 12.5mm tall, featuring an hourglass silicon strip across the aluminium body that’s noticeably absent of any kind of branding. It’s also light at just 74g, but sits sturdy with rubber pads stopping it from slipping.

The heatsink enclosure, which I’m told won’t be sold separately, is sealed, granting it water, dust, and shock resistance with an IP67 rating. For context, this is just shy of the IP68 rating on most modern smartphones, but just because you can keep it submerged in 1 metre of water for 30 minutes, doesn’t mean you should.

Testing the 1TB model, I encountered my first problem: compatibility. Thunderbolt 4 is a pretty exclusive club right now, with only the latest motherboards supporting the new standard. It’s backwards compatible with Thunderbolt 3 and offers the same 40GB/s theoretical speed limit, but even that six-year-old connector has a troubled relationship with Windows systems, only recently appearing more frequently on some of the best gaming laptops.

The good news is that Thunderbolt 4 is a lot more Windows friendly and the adoption rate is likely to climb over the next few years. But, for now, the best I have at my disposal is the USB 3.2 Gen 2×2 port on my MSI MEG Z490 ACE motherboard, which caps out at just half of what Thunderbolt is capable of.

As expected, this limitation restricts read and write speeds, so we’re not able to achieve anywhere near the respective 2800MB/s and 2500MB/s ratings that GigaSSD claims the drive can hit. The potential is certainly there with the right system, however, and other reviewers have achieved these figures.

There’s an even greater synthetic performance hit when plugging the device into a 3.2 Gen 2×1 port, which handles just 10GB/s at best. Fortunately, benchmarks tell less than half the story here, as the GigaDrive Pro shines in real-world performance. File transfers hit a peak of 1.2GB/s and an average of 850MB/s to shift 30GB files in mere seconds, and some games actually boot faster on the GigaDrive Pro than the WD Blue SN550.

Note: There are other factors that contribute to the time it takes to load into a game, such as partner logos and health warnings flashing on screen, the synchronisation to the cloud, DLC checks, and connecting to servers.

It shaves off four seconds when booting into Cyberpunk 2077 and lets you take to the skies quicker in Microsoft Flight Simulator by saving you up to six seconds – and every second counts on a game that takes minutes to load. Assassin’s Creed Valhalla is the only exception, where it took the same amount of time to get to the main menu, but one second longer to step into Eivor’s shoes.

Throughout these tests, the GigaDrive was warm to the touch but didn’t exceed the 40 degree Celcius limit. This is a result of an effective proprietary heatsink, and a good arrangement of the Intel JHL8440 Thunderbolt 4 controller and Intel AGI M.2 2280 memory under the hood. Atto flashes up the same model number as a WD_Black SN750, indicating that there’s a bit of Western Digital in the engineering, but GigaSSD says the final version will purely be AGI’s solution. 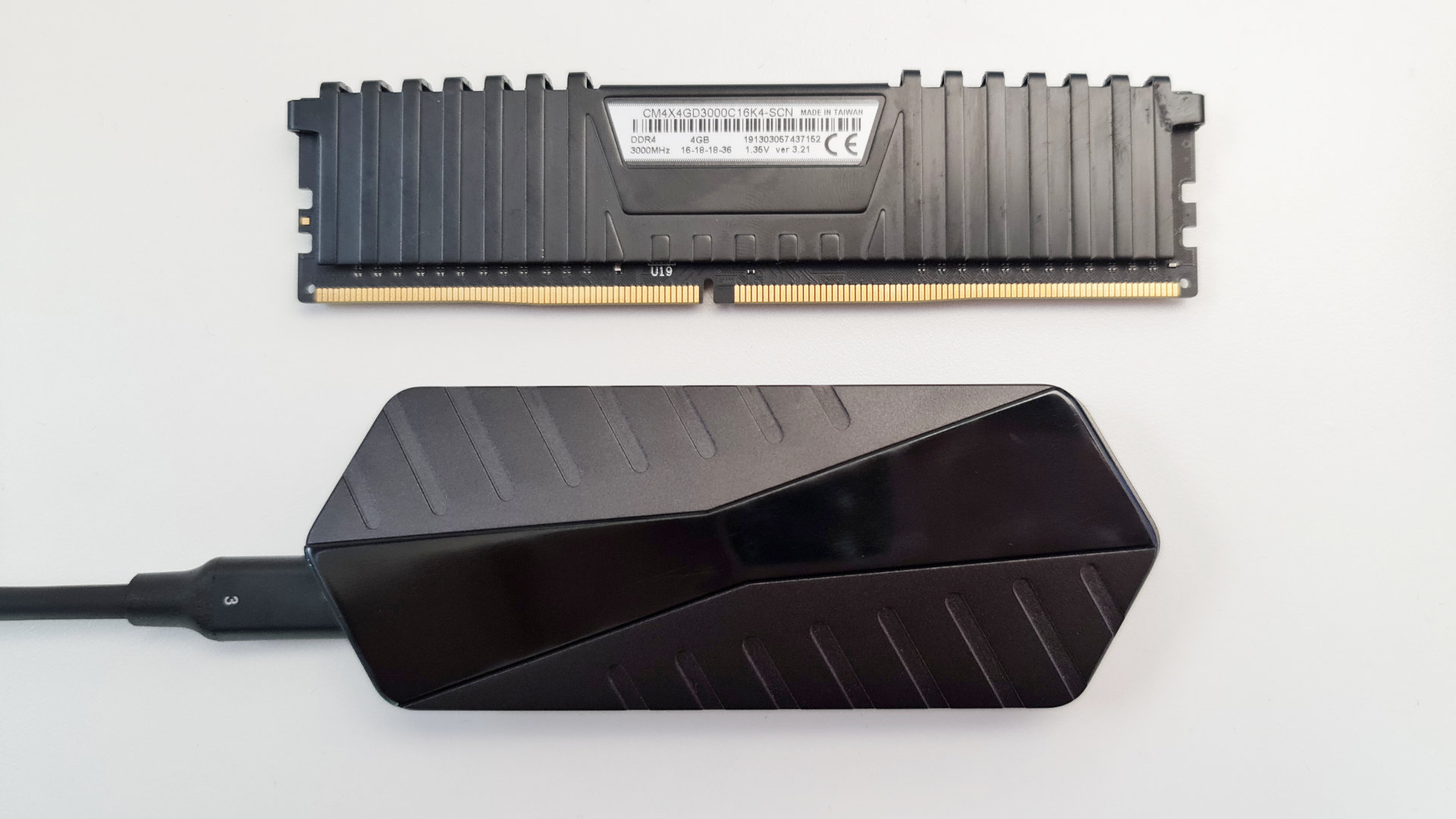 With real-world performance unhindered by the lower specification, the GigaDrive seems like the perfect companion if you want to bolster space on a gaming laptop or you’ve already filled the few NVMe slots in the best gaming motherboard. Not only is it leagues above external hard drives and other portable SSDs, it holds its own against some of our favourite internal NVMe devices, which is no small feat.

At $153 / £110 for the 1TB version, the GigaDrive offers a spectacular 15 cents per gigabyte, which blows competition like the Samsung X5 and its 35 cents per gigabyte out of the water. It’s not quite as low as the WD Blue SN550’s $130 MSRP, but that’s an unbelievably small tax to be able to take the drive with you on-the-go. It’s important to note that prices are set to rise as the crowdfunding campaign draws to a close at the end of this week, but it still edges out rivals at its expected 30 cents per gigabyte.

The only thing working against the GigaDrive Pro is that it’s currently only available on Indiegogo, which carries certain risks. When you back a product, it’s not the usual exchange of money for goods you’re used to, as there isn’t a guaranteed product at the end. To alleviate worries, the device has already smashed its goal by 5,366%, and GigaSSD offers a 14-day money-back guarantee and a one-year warranty.

It’s entirely up to you whether you think it’s worth supporting it before it hits shelves, but the GigaDrive Pro is second to none right now and should reach backers by July – it’s just waiting on its CE safety certificates. And if you’d rather wait for the PCIe 4.0 version, that’s fine, too, as GigaSSD is already hard at work on the next one.

It's one of the fastest external SSDs that can boot games just as quick as your internal NVMe, even if you don't meet the top spec. You can't buy it yet, but you can back it on Indiegogo if you're brave enough.