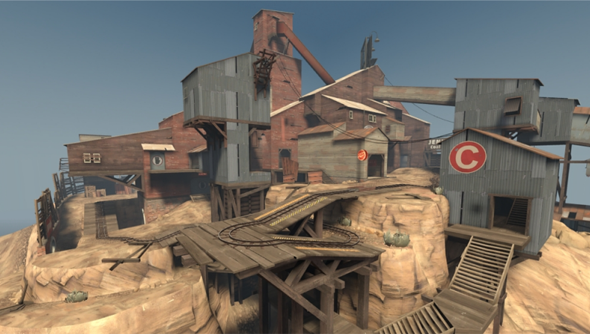 Did you know? On the consoles, there’s a carbonite version of Team Fortress 2 that plays exactly the same way now as it did in 2007. Imagine that. Over here, it’s been onwards and upwards for the past seven years – a cycle of perpetual improvement for one of the best first-person shooters on PC.

It’s been four years since the Engineer Update that introduced Upward as a Payload map, for instance – but Valve are still trimming and weeding, and bettering the performance of the game overall.

Upward, for the uninitiated, is one of those Payload maps with multiple control points per round – a lot like Badwater Basin.

I’m not familiar enough with it to know what tactical significance the addition of stairs to the front of Blue’s underground spawn section will yield – but Valve have deemed them necessary.

They’ve also widened the trigger_hurt area around Upward’s outer cliff – i.e. the bits of terrain that damage players on touch. The covered areas now include the bottom of the map – so don’t jump.

Elsewhere, the dev team have added a check to prevent engineers from building things in trigger_hurt areas, and done some kind of hocus pocus with the client to improve general stability.

Do any of you lot play Payload maps on the regular? If so, you’ll probably want to browse the newly improved Team Fortress 2 Workshop.