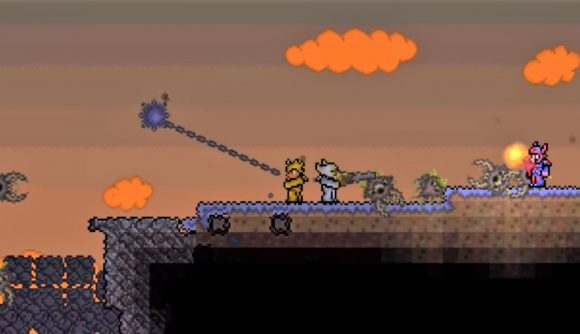 The Vice-President of Re-Logic, the studio that gave us the immensely popular sandbox action-adventure title, Terraria, has announced in a tweet that no game released by them will ever be an Epic Store Exclusive.

Addressing some perceived ‘confusion’, Re-Logic VP Whitney Spinks is critical of the suggestion, going so far as to say that, “There is no amount of money we could be offered to sell our souls”. The statement follows the recent announcement that studio will be appearing at the PC Gaming show at this year’s E3, which will be hosted by the Epic Games Store. It seems to suggest that there may have been some concern from the studio’s player fanbase that they might be considering such a move, as suggested by Reddit user Slawrfp, possibly precipitated by their appearance at the Epic Games Store-hosted show.

This statement marks the latest flare-up in a recent string of controversies surrounding the topic, with a flurry of upcoming titles committing to become Epic Store exclusives. Examples include Ubisoft’s new Tom Clancy game, Ghost Recon Breakpoint, No Code’s Observation, 4A Games’ Metro Exodus, and others, marking a shift in the competition between Epic and its major rival, Valve, owner of the Steam store.

Spinks seems to have received a largely positive response from Re-Logic’s player fanbase, based on the responses to her tweet, though it has been questioned whether other indie developers would have the financial viability to make a similar commitment, given the profit margins Epic games seems to be offering (Deep Silver’s CEO previously cited Epic’ 88/12% revenue split).

Ready to play? Check out the best sandbox games on PC

Spinks’ response to this was that she was speaking for her own studio, and that she could “understand indies taking advantage of free money”.

Since there seems to be confusion- No Re-Logic title will ever be an Epic Store exclusive. There is no amount of money we could be offered to sell our souls.

Given Epic’s success so far in acquiring titles, it seems likely that the list of exclusives will only continue to grow, and that the competition between Epic and Valve will keep developing full steam ahead for a while to come.