Every last area in The Ascent is an astonishingly detailed diorama of Blade Runner-inspired dystopia. From the festering depths of the Deepstink – the industrial heart of the Ascent Group’s arcology – all the way up to the shimmering corporate luxury of the Pinnacle, every rusty gangway, rain-soaked noodle bar, granite boardroom, and neon-lit vista looks like a piece of concept art brought to life. Hover cars stream across the yawning chasm at the centre of the superstructure. Alien throngs shuffle through market hubs, every storefront inviting the crowd to stop and stare with neon displays, holograms, and nosebleed techno. This is a truly resplendent slice of hyper-urban despair.

Tarnishing this visual feast is the unavoidable realisation that this is probably one of the most derivative cyberpunk game worlds around, too. Entire buildings are plucked straight from Blade Runner, pedestrians wander the streets under umbrellas with neon poles, and gigantic nude holograms dance in the distance. The vocabulary is Gibson through and through, the alien species look like they’ve got lost on the way back from the Mos Eisley cantina, and despite the abundance of advanced tech everyone seems content with the good ol’ cathode-ray tube in their TVs. Sure, this world is brought to life with stunning attention to detail, but you’ve been here before.

You arrive in this disorganised crush as an indentured labourer, locked into a contract until death with the only hope of escape being to work your way up through the corporate world as a hired gun. To do that, you’ll pick up missions from gang leaders and mercenaries, sending you all over the superstructure to fetch things and kill people.

The Ascent – which you can grab via Game Pass for PC, coincidentally – is an action-RPG, but its combat has plenty of quirks that differentiate it from genre staples like Diablo. First, this is predominantly a twin-stick shooter, so as soon as the shooting starts you’ll find your trigger finger clamped down and your left thumb slowly circling around as you kite enemies and avoid incoming fire. A dodge-roll button lets you dive through packs of melee-only brawlers or dart away from incoming rockets, encouraging you to approach fights with mobility in mind. 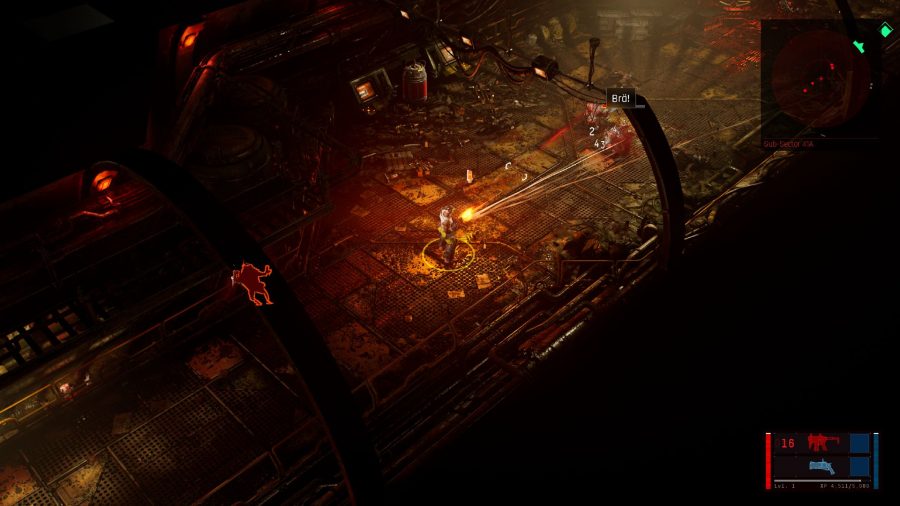 Abilities and equipment that recharge over time inject some flavour as you progress through the campaign, letting you build around your preferred playing style. You can summon a huge batch of spider bots that latch onto enemies and explode, which is great for taking down tankier units. Hydraulic Slam will instantly wipe out any weak mobs in front of you; deployable robots give you a temporary combat companion to draw enemy fire; and hacking augmentations like Rat Bite and Joyrun Dragon let you charm foes or put them into stasis.

The Ascent is a resplendent slice of hyper-urban despair

Unfortunately, they don’t all feel particularly viable as – due to the sheer volume of enemies The Ascent throws your way – most battles are a simple matter of putting out as much damage per second as possible. I quickly settled on the spider bots and a summonable melee droid, the latter to break up swarms of enemies while the former clears the area if things get too congested. Co-op does free you up to experiment with different builds, but the imbalances still shine through.

Curiously, there’s also a cover system, which lets you hunker behind waist-high obstacles and fire over the top. This only really works to cheese through certain encounters, as most of the time there are so many onrushing enemies and long-range area-of-effect attacks that sitting still, even behind a wall, is effectively a death sentence. 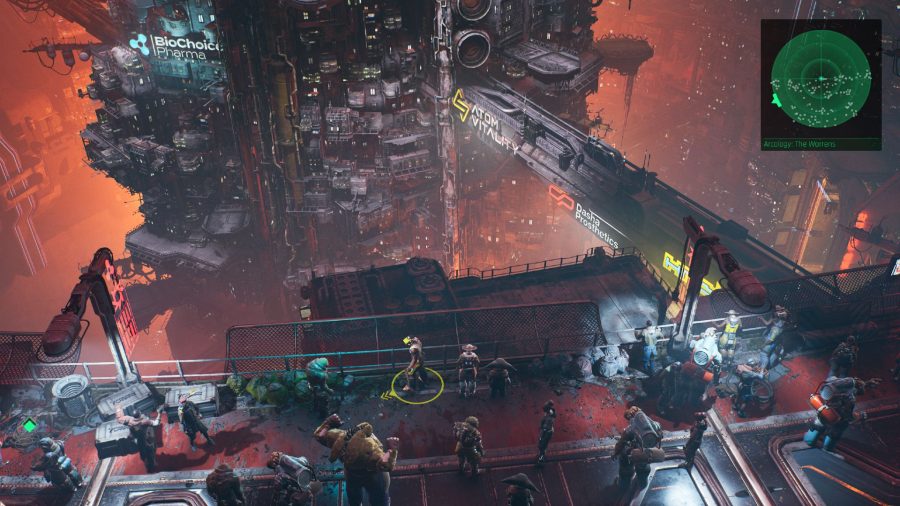 There’s an added complication in that you don’t actually stick to cover. Combined with The Ascent’s isometric perspective, it can be really difficult to tell if you’re in cover, and if so, whether that cover can be fired over. Even when in the open you can still choose to shoot either at waist height or over your head, which is further complicated by the presence of short enemies who can comfortably run under your hail of bullets if you’re firing high.

Convinced? You can get The Ascent with Game Pass for PC

I did, however, stumble upon a ludicrously effective way of dealing with tricky fights using this mechanic: just lurk at the bottom of a staircase and fire your gun over your head, and you’ll kill almost everything that comes your way before it can lay a finger on you.

Weapons vary in quality and effectiveness, but there are plenty of options, ranging from hand cannons, SMGs, and shotguns all the way up to rocket launchers, flamethrowers, and miniguns. While there are a couple of options in each category, there’s not much to really differentiate one assault rifle from another, and once you start investing in upgrades for a specific weapon you’re pretty much tied to using it for the rest of the campaign. Weapons occasionally drop from enemies or spawn in chests, but most can be bought from vendors around the world, which takes some of the sheen off acquiring a meaty new hand cannon or precision laser rifle. 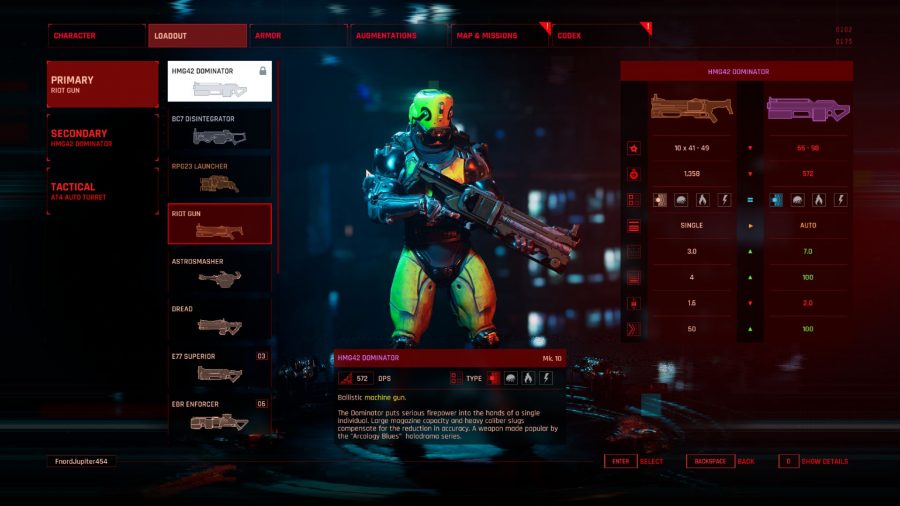 While the arsenal isn’t particularly exciting, a ton of work has gone into making sure every gun feels like it packs a punch. A high-calibre killing shot will explode an enemy into a viscous slop of flesh and blood, limb confetti raining down after a deafening squelch. There’s plenty of audiovisual feedback whenever you pull the trigger: shells tumble out of the ejector port, muzzle flash lights the scene, and bullet trails fill the room with smoke. The simple act of shooting things never gets old in The Ascent, but combat as a whole does lose its lustre after the first few hours.

Occasional difficulty spikes and unexplained mechanics make The Ascent’s 15-hour main campaign unnecessarily arduous, and it’s certainly guilty of padding out late-game fights by simply hurling more and more enemies at you, but the real problem with this action-RPG is that there’s almost no space for roleplaying. You can’t choose how quests play out or interrogate NPCs for different rewards and approaches, and combat encounters force you toward a limited set of builds that prioritise damage output and mobility over all else.

There’s no speccing around a crucial skill or opting for a hacker class over a gunner, and while there are skill points to invest and plenty of different armour pieces to choose between, it doesn’t really matter what you go for so long as the stats light up green when you compare it to what you’re currently wearing. 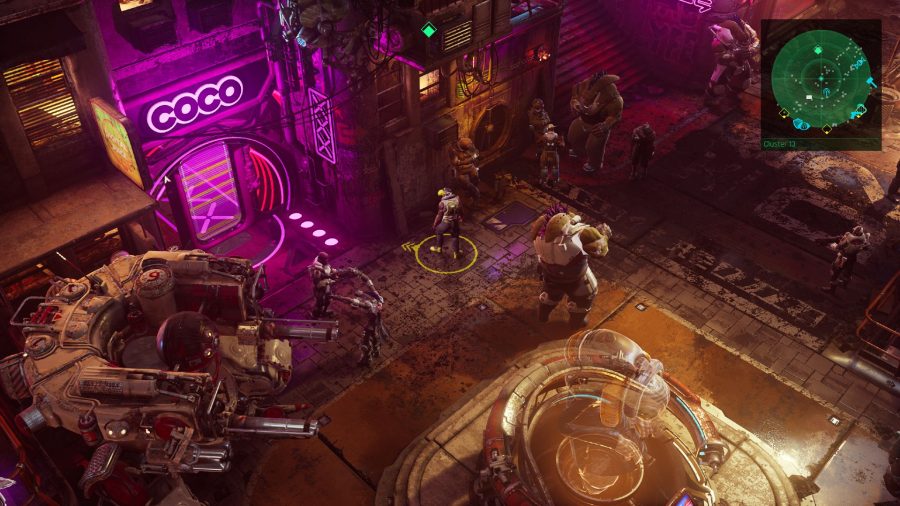 Smaller foibles like an incoherent fast travel system and the massive distances between objectives combine to test your patience further. It’s fortunate the backdrops are so detailed, because you’re going to be staring off into the distance a lot as you jog between sectors.

Those frustrations stack up by the time the credits roll, though your mileage may vary depending on how much you like the cyberpunk aesthetic, albeit at its most clichéd. As a twin-stick shooter with light RPG mechanics, The Ascent is a magnificent example of how far set dressing and punchy shooting can take you. Its Ballard-inspired arcology is packed with so much detail that you’re left with the gnawing feeling that this beautifully realised world deserves slightly more.

A twin-stick shooter that looks and feels great all the way through, but doesn't do enough new to keep your attention as you invest more time in its RPG systems and world.