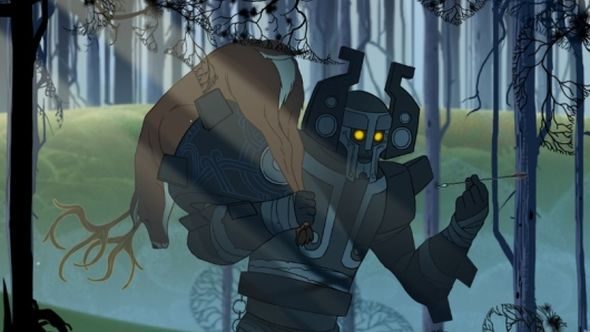 The developers of The Banner Saga say they “haven’t shied away from” the political parallels that can be drawn with their game. With the final chapter of the apocalyptic Norse trilogy due to release next month, some themes in Stoic’s game bear striking similarities to hot-button political topics.

If you’re unfamiliar with The Banner Saga, it follows a caravan of refugees as they flee across their known world. Hot on their heels are an army of Dredge, statuesque armored figures feared and hated by the two civilisations that occupy most of The Banner Saga’s map. As the saga has continued, however, the concept that the Dredge are simple bad guys has been challenged, and as everyone huddles together at the end of the world, it’s easy to come to pity your enemies.

In an interview with PCGN, lead designer Matt Rhodes and lead developer Alex Thomas said that although the foundations of the story were set out six years ago, developers Stoic haven’t avoided the geopolitical parallels that can be drawn between their games and real-world refugee crises.

Thomas says that those comparisons were “quite a coincidence for us, but I don’t think we shied away from it. What I’m really happy with how it turned out was that we’re not telling you what to think either. You have the choice to go either way, and that’s always been an important aspect for us. You have the choice to do the thing that you want to do. There’s going to be a consequence that you might not like, but we tried to keep it as unbiased as possible. We tried to write it in a way that feels like this is what actually would happen as a consequence of your actions. But yeah, you’ll see parallels if you look for them, and I don’t think that’s necessarily a bad thing.”

Rhodes went on to say that “we’ve definitely been aware [of the current political climate]” while developing the game. He even says that he joked during development about putting Rugga, who Thomas describes as “the most despised character in the game” in a ‘Make Arberrang Great Again’ hat, in a reference to the human capital of The Banner Saga’s world.

Thomas says that while “we’re not being that overt,” characters in the game “are dehumanised to a large degree.” Despite the history and lore of the game directing players to hate and fear the Dredge, he says that “it’s the players decision whether they’re going to accept that the Dredge might be more like them and they want to protect them or not.”