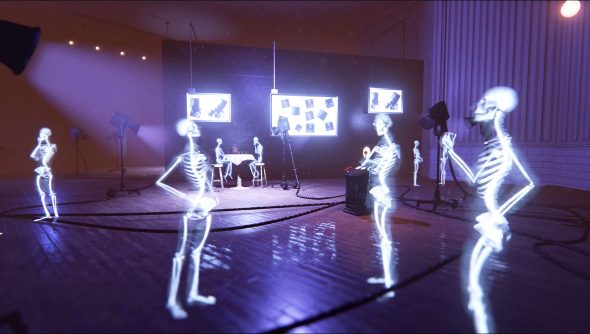 Hashtags and an endorsement from Ken Levine could not, unfortunately, save The Black Glove, the surreal exploration of art and artists from ex-BioShock devs. The Kickstarter ended on the weekend without reaching even half of the $550,000 goal.

Day For Night Games’ Joe Fielder says that it’s not over, though. “[W]e mean to fight like hell to keep it from being cancelled. We believe in the game and you all have shown you do, too.”

I couldn’t help but think, back at the Kickstarter’s inception, that it would be a tough sell. The Black Glove revels in surrealism and mystery, which isn’t exactly conducive to a succinct, clear pitch – and that’s really what it needs to be.

With the industry drowning in crowd-funding ventures, many of which have ended in disappointment, second Kickstarters or the splitting up of the game into parts, it makes sense for backers to favour the games they immediately understand.

A second go at fundraising seems unlikely. “We asked for the total we needed to guarantee that we could self-publish the game within a year with 6+ hours worth of content for $20. If we turned around immediately and asked for less without having secured the rest of the funds necessary, we wouldn’t be able to guarantee our Kickstarter backers that we could deliver the game.”

But Day For Night Games are looking at other routes. “We’re beginning to talk to all the publishers who have reached out over the last few weeks. We have a few other ideas, as well.

“It may be weeks or months before we have news to report, but we intend to be back with more as soon as possible.”