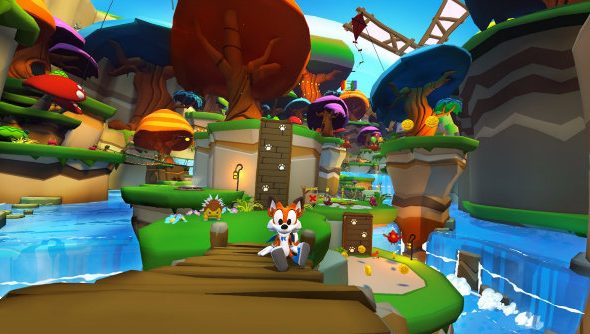 Why not check out our list of the best VR games so far, since you’re here.

According to Rubin, Oculus want to kickstart VR development, providing a surge of games so the VR platform can be filled up with exciting stuff more quickly than it naturally would.

Remember when everyone pulled out of developing for the Wii U because it had a small install-base? Oculus don’t want that happening with VR, so they’re filling Oculus up with games in the hope of attracting the players.

Rubin explains in his Games Industry Biz interview how they want to make the platform as attractive as possible, especially for games with big financial risks.

“The average gamer is now aware of $100 million games,” Rubin said. “And while we certainly cannot build a $100 million game that takes four years, in the year we’ve had dev kits, we can try to get closer to that by funding significant leaps beyond the financial certainty that a developer would need to have to do it on their own.

“As a developer looks at a multi-million dollar production in VR right now, they say there’s no way that will earn its money back in any reasonable amount of time, so instead I’ll go make a non-VR PC game of that scale if I want to because that’s a better bet. We don’t like that. We don’t want it to be $500,000 games this year, million dollar games next year, two million dollar… and take decades or at least a decade to build itself to the point where you can afford bigger games.”

He goes on to explain that Oculus decided to combat this by throwing some of that sweet Facebook money at games, in the hope that it leads to a larger consumer base, which in turn attracts more developers.

“To do that, we have put huge amounts of money into the ecosystem, more than any of our competitors,” said Rubin.

Despite this, Rubin claims that they’re not looking to keep games exclusive on their platform forever, even if they do help with funding.

“So if the first game barely makes its money back, the second game can be profitable because the consumer’s there,” Rubin explained. “That’s theirs to do on their own on any platform they want. And in a lot of cases, we’re looking at software that’s in process, where the developers are running to the end of their logical stream of cash and they come to us and they say, ‘I want to put this in your store,’ and we say, ‘That’s awesome. However, we can tell it’s kind of unfinished.’ And they’re like, ‘We can’t finish it. We don’t have the money to finish it.’ And we say, ‘Well, how about we give you a little extra to finish it and in exchange you bring it out as an exclusive in our store for a limited amount of time, continue to develop for all platforms, and then put it out on all platforms?’

“The better game gets to all consumers in that case. And those are the deals we’re making. And that, to me, makes a lot more sense than just let this thing work itself out over a decade.”

Even first-party games, like Crytek’s The Climb, could eventually come to other platforms in sequels, but Rubin says it wouldn’t have existed as a game at all without Oculus seeing it and working with Crytek to turn the prototype into a full game. Crytek retain the rights to the IP, however.

Rubin believes that Oculus is doing what no other company can for VR, and in the end it’s going to be a “pretty good thing for the consumer.”

This follows Oculus founder Palmer Luckey’s recent comments in defense of exclusivity on VR headsets, where he compared it to how Sony handle PlayStation. Those comments sat in contrast to Valve’s Gabe Newell, who said”we don’t think exclusives are a good idea for customers or developers“.