Update December 9, 2016: According to Rocketwerkz’ Dean Hall, Valve’s VR funding is inaccessible to the majority of developers.

Despite us first hearing about it six months ago, DayZ creator Dean Hall says that he doesn’t know of anyone who even knows how to apply for Valve’s VR funding program, as stated in his Reddit post yesterday. Originally announced in an email by Gabe Newell to a fan asking about Vive exclusives and Valve’s stance, developers who have benefited from it haven’t been forthcoming.

Prefer gaming on Steam but a little lacking on the money side? Here’s the best free steam games.

“I’ve yet to know anyone who’s got that,” mentions Hall, “[or] has been told about it, or knows how to apply for [it].” We contacted him about it but he had nothing further to share.

The original post sat at the top of Reddit for quite a while back in June and was widely reported, so it’s unlikely any full-time developers are unaware of its existence. It’s also exactly the sort of thing VR needs right now as it struggles to find a wide userbase, and the fans it does have isn’t fond of exclusivity deals even though they’re all that’s holding up proper development. It’s possible a few developers are receiving the program, but they certainly aren’t being loud about it.

We also put out a call on Twitter for any developers who had applied for the program, successfully or unsuccessfully. None replied. Valve did not respond to a request for comment on the matter, either in terms of the program itself or who had benefited from it. While much of these sorts of financial discussions may be wrapped up in NDAs or simply not the sort of thing people wish to discuss publically, nobody having anything at all to say about it is rather odd.

We’d be interested in hearing from any developers regarding the funding.

Original story June 17, 2016:In an e-mail sent by a Redditor and posted to the r/Vive subreddit, Gabe Newell has revealed how Valve are supporting VR developers. He also clarified Valve’s position that they don’t think exclusives are a good idea “for customers or developers.”

On the funding side, the reason Valve are doing this is because of risk. Gabe says that they are in “a much better place to absorb financial risk as a new VR developer” and that developing for VR is generally a “triple-risk whammy – a new developer creating new game mechanics on a new platform.” Therefore, they’re giving funding in the form of “pre-paid Steam revenue.” He doesn’t go any further into this example, but presumably it means that those who accept the money pay it back over time from their profits from Steam sales, or elsewhere, assuming they finish.

However, Valve don’t demand that these developers release on Vive. “They can develop for the Rift or Playstation VR or whatever the developer thinks are the right target VR systems.” Valve do this because they think it will let developers avoid exclusivity deals, which, obviously, would be bad for everyone – Valve, the developers and customers. 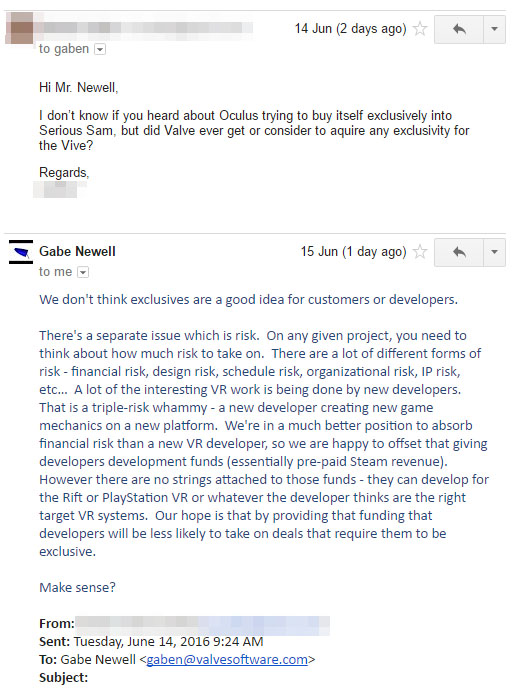