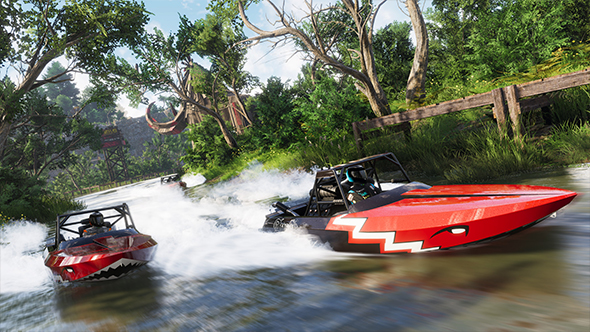 There isn’t much that’s more American than hitting the highways for a summer cross-country road trip, and Ubisoft’s new open world racer is set to release just in time to make those dreams come true. The Crew 2 will launch on June 29 for PC and consoles.

Check out the best racing games on PC.

Ubisoft promise a fully redesigned take on the open world US, with vehicle options including not just cars, but bikes, boats, and planes as well. Motorsport competition takes place across four different “families,” including street racing, off-road, pro racing, and freestyle options.

If you can’t wait to start racing and you like collector’s editions full of game-related tchotchkes, Ubisoft are also offering the Motor Edition, which comes with early access to the game on June 26, the full season pass, extra DLC, and a customized license plate which is real but presumably not street legal.

As confirmed at last year’s E3, players of the original game can unlock an array of vehicles in the sequel, and the series of challenges to open those bonuses is already underway. A beta is also set for sometime in the future across all platforms, but exact timing on that has yet to be revealed.