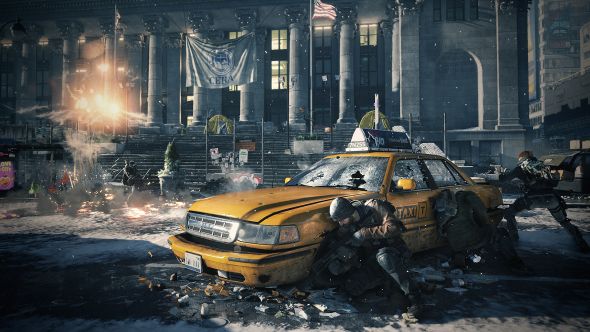 Microtransactions for cosmetics are coming to Tom Clancy’s The Division, starting with version 1.6 of its public test server (PTS). You’ll be able to use real money to purchase a new in-game currency called ‘Premium Credits’, with which you can buy a range of new cosmetic items and emotes. The decision arguably contradicts previous comments from developer Ubisoft about The Division’s monetisation model.

If you like shooting people with friends, you’ll love some of the best co-op games on PC.

Here’s the announcement on the Ubisoft forums. Some Premium Credits will be available for free at launch if you’re a member of the Ubisoft Club, but otherwise “Premium Credits cannot be acquired via in-game activities”, and you’ll need to spend real money to buy them. “Prices will be communicated at a later date,” say Ubisoft.

Premium Credits will be account-wide, so you can share them across characters, and Ubisoft are keen to stress they will “not allow for players to get any form of competitive advantage”. The new currency can be spent on weapon skins, backpack skins, clothing items, emotes, and bundles containing all of the above. All the eligible items are new – there are still many cosmetic items that “can be acquired normally while playing.”

Until now, The Division had been funded solely by purchases of the initial game and of DLC expansions, of which there have so far been two (Underground and Survival). The Division’s creative director Magnus Jansen said the game would not use microtransactions in an interview with Eurogamer a couple of months before The Division’s launch last year, but he left himself some wiggle room.

Asked whether the game would be funded by DLC, microtransactions, or both, Jansen replied “It’s definitely just the one – the DLC… I don’t know if there’s a globally agreed definition of the word microtransactions, but you don’t pay to win or advance or anything like that. We have DLC plans – which we’re not talking about now – and obviously you’ll pay for that, but in addition to that there’s no microtransactions, as I define them.”

The Division has often been compared with Destiny, another loot-driven social shooter which (for now, at least) is exclusive to consoles. In October 2015 that game introduced cosmetic microtransactions via a currency called Silver, to which Premium Credits seem functionally identical. This was almost a year after Destiny launched, and soon after the release of its third expansion. The Division is at a comparable point in its life-cycle, just over a month from its one-year anniversary and having just unveiledits third expansion.

Given that The Division has an added audience of PC players, it’s interesting to see it so closely follow the monetisation decisions as its console rival.