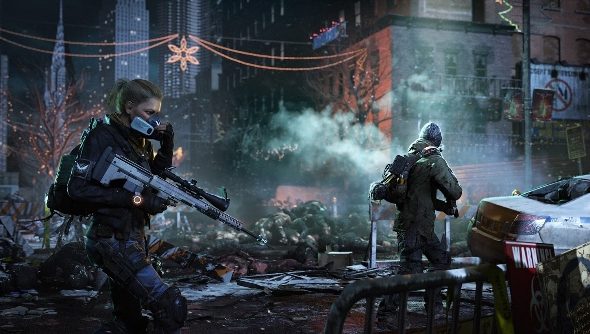 The Division’s servers might not even be flipped on yet – here’s when they will be – but Ubisoft are already talking about the free updates that will be enriching the game in the coming weeks after the game’s release, as well as the paid expansions on the horizon.

Ubisoft’s post release plan already seems more expansive than some of the games in our list of PC’s best RPGs.

Once you’redone with The Division’s main storyline, you’ll be getting stuck into its end-game through daily and weekly missions as well as Dark Zone events, but there’s more planned to make sure you keep rocking those snow boots and that iconic beanie hat.

April will bring the first big free update, called Incursions, which will introduce a new “challenging end-game activity developed specifically for squad play”. It sounds a bit like a survival mode in the official description which says: “Teams will be able to test their skills as they face seemingly unstoppable enemies to gain high-level weapons and equipment.”

And once you’ve got hold of that high level equipment you will be able to trade it with your friends, as this update also adds loot trading, allowing players to swap collected loot, but only if it’s acquired while you’re in a co-op session in the same group. Presumably this is to stop high level players easily wrecking the game by giving low-levee players a super shotgun.

Following all that, May brings the second free update which will add an Incursion to Columbus Circle and new features to the Dark Zone.

Three paid expansions will also be released over the course of the year and be will available in the Season Pass, the Gold Edition and the Sleeper Agent/Collector’s edition of the game.

The first of these, called Underground, will be available in June and will take you beneath New York, exploring the labyrinthine network of tunnels and subways.

Paid expansion two , called Survival, arrives in summer and sounds like another spin on survival mode, hence the name. Here’s the official description: “This expansion will challenge players to survive as long as possible by gathering essential supplies in a very hostile environment.”

And finally, there’s a third paid expansion coming this winter and will have you facing a “relentless” new threat.

The Division will be available on March 8.