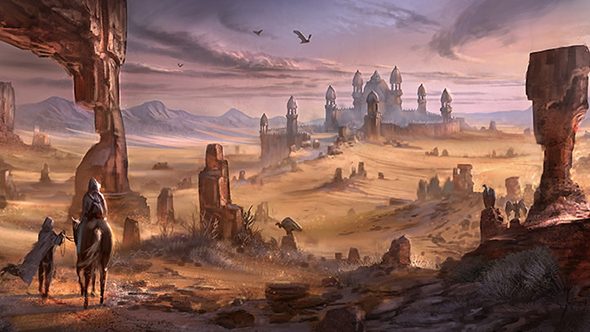 The Elder Scrolls VI is early in development – so early, in fact, that it might just be a handful of words on a whiteboard in the Bethesda office. Nonetheless, the studio is confident enough that they’re working on the next entry in the fantasy series that they went and debuted a teaser trailer at E3. It was maddeningly brief, but it did give us an apparent hint at the new game’s location.

We can apparently count on that tease to point us to the actual setting, as Bethesda has locked in the setting for the new game. Todd Howard himself says so, and adds that the region was settled on “a while ago.” He also says that it should be possible to work out the game’s location from the teaser, though perhaps it’s difficult to reach a final answer – but “you can rule some things out. And you can rule some things in.”

Fill the half-decade you’ll be waiting for TES6 with the best RPGs on PC.

Our best guess for The Elder Scrolls VI setting is Hammerfell, and it seems Eurogamer is on the same track. The publication asked Howard if that was indeed the setting, but he just replied “I’m not going to answer where it’s set!” Damn, Todd, that’s ice cold.

Watch that 30 seconds of footage all over again.

The next game from Bethesda is heading to space and is pretty futuristic itself –Starfield is slated to be a next-gen game. That means the The Elder Scrolls VI release date is going to be even further out. Still, it’s good to know that there’s at least something concrete put down for TES6.