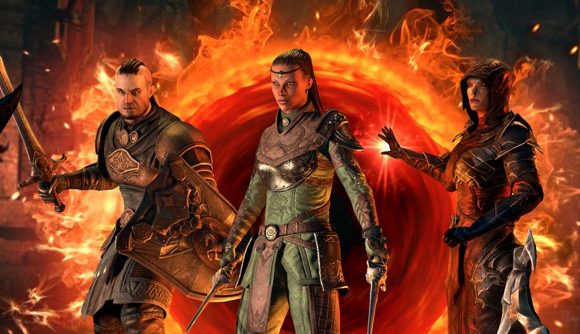 It was revealed prior to the release of the Gates of Oblivion expansion earlier this year that players would spend “a lot of time” in the Deadlands towards the end of the event – which we now know was because Bethesda was planning to follow up the Oblivion chapter with a proper Deadlands expansion at the end of 2021.

As revealed in the year-end stream to Gates of Oblivion, The Elder Scrolls Online: Deadlands will launch on November 1 – with the free Deadlands Prologue chapter being available now. Simply grab the quest “An Apocalyptic Situation” for free from the in-game Crown Store and find out more about Mehrunes Dagon’s latest nefarious scheme, which leads directly into next month’s expansion.

The Deadlands expansion will not be free, however, and can be accessed with an Elder Scrolls Online membership or by buying it with premium currency Crowns in the Crown Store. The expansion will include areas last seen in The Elder Scrolls IV: Oblivion alongside new locations like The Sever and Fargrave.

Take your first steps into the #Deadlands this November.

Explore unforgiving areas such as The Burn, The Sever, and the mystical city of Fargrave. Just watch out for the Infernium, Dagonic Manticora and, of course, Mehrunes Dagon’s many loyal servants. pic.twitter.com/bVGL4OArd8

We’re a long way from the release of The Elder Scrolls VI and we don’t even know the title yet, so The Elder Scrolls Online may be a good alternative for fans desperate to explore Tamriel once again. Developer Zenimax Online Studios is also currently working on a new MMO alongside ESO, although there’s no clue when we’ll see more of that.