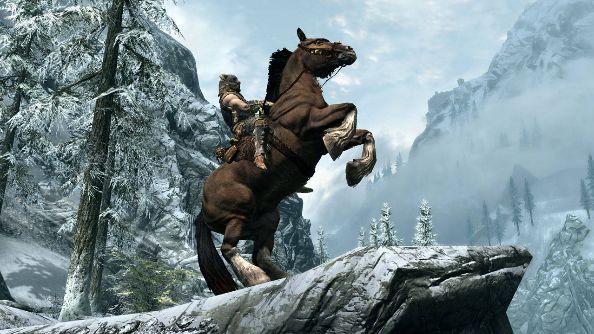 The lead developer of Skyrim Together says that its devs will pull the project if any paid services try to make a profit from it. The mod is a multiplayer project that aims to let up to eight players tackle the fantasy RPG at the same time, and is being built by a small group of developers in their free time.

Lead dev, Yamashi, said on Discord that the developers “have been working on [Skyrim Together] for eight years on our free time, not so that some company makes money off of it”, and that “if a single paid service were to appear we will pull the server files from the public”.

He further stated that “We just don’t want to see server companies selling you a [Skyrim Together] server for 2€/slot/month”, and seemed resolute on the subject, adding “yes, some games allow it, we don’t, end of the story”.

Yamashi refers to companies that offer hosting services for games, which users pay a price to use as an alternative to setting up their own servers to play the game on. Whereas some developers might allow their titles to be used in this kind of business environment, the creators of Skyrim Together have specifically forbidden this type of usage, according to fellow dev Maxgriot on the mod’s subreddit.

These comments follow on from the devs’ recent release of playable nightly builds of the mod, which are designed to be “experimental” versions, used to develop it through crash reports. Players have been experiencing some interesting bugs and glitches, which is to be expected as current access is is based on untested builds. The devs have also decided not to host game servers for the nightly build, which means the process of getting it up and running is just slightly more involved than may be the case for other mods.

With Skyrim Together already eight years in the works, it’s hard to know if fans picturing a Dovakiihn-duo or group outing to Goldenglow in their future will see their dreams realised in open beta any time just yet. Hopefully we’ll get to take some arrows to our knees together soon.