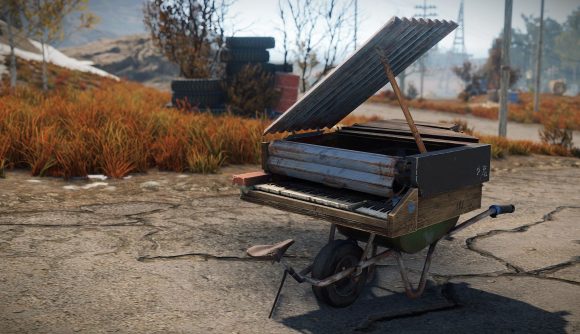 The Skyrim theme tune, Dovahkiin – the rousing piece that plays over the RPG game’s menu, with a viking-like choir bellowing in dragon language  – is instantly recognisable, even to many non-fans. It’s inspired plenty of real-world cover versions over the near-decade since Skyrim’s launch, and now it’s come to one of the big hitters on the survival games scene: Rust.

User Keyboardwarrior7 has posted a brand-new cover of Dovahkiin on the Skyrim subreddit, as played on a piano in Facepunch Studios’ multiplayer title. We’ve included it below – and, as you can hear, it’s a faithful and immediately identifiable rendition of the iconic tune (though the Rust pianist’s – erm, character’s – somewhat clumsy hands probably don’t quite portray how tricky the piece must be to actually play).

Late last year, Rust got an ‘Instruments Pack’ DLC, which gave players the chance to lay down some ditties in-game, with options including a ‘Junkyard’ drum kit, ‘Plumber’s trumpet’, ‘Shovel’ bass, and – of course – a ‘Wheelbarrow’ piano.

In the comments, Keyboardwarrior7 explains that the melody was recreated in Rust via the multiplayer game’s local files. “Make a folder called ‘instruments’ in Rust’s local files, download a midi file and save it in instruments, and name it something easy,” the user says. “Then, while you have an instrument equipped in Rust, press F1, then type ‘instruments.playrecording’ (midi file name), then hit ‘enter’, and [it] will play whatever you want.” Sweet.

played Dovahkiin on a piano in Rust, hope you like it. from skyrim

Take a gander at Skyrim’s Dovahkiin à la Rust above. It’s quite lovely. And if you’re inspired to try out some in-game songs of your own, take a look at our list of the best Skyrim mods around – there’s one that lets you become a bard and delight Tamriel with your talented tunes.