I’m not the first person to want a crossover between the two juggernaut RPG games Skyrim and The Witcher 3. Plug ‘The Witcher’ into Nexus’s enormous catalogue of Skyrim mods, and you’ll find a decent batch of options to try. If you want to drop some Witcher weapons, armour, NPCs, or even Geralt himself into Tamriel’s frostiest region, the modding community’s got you covered.

Until now, I’ve preferred to take a more purist approach to my Skyrim experience, adding only the tweaks and tinkerings needed to bring the near-decade-old game up to scratch visually. Oh, and to kickstart its shopkeepers’ cash flow, too. You Skyrim stalwarts know what I mean.

But with Netflix’s The Witcher season 2 delayed and no sign that those The Witcher 4 hints are going to solidify any time soon, I thought I’d recruit Geralt myself to take up his two swords and sink his teeth into monster hunting once again – this time in a faraway land of dragons, the Dovahkiin, and endless bloody draugr.

So, a little mod hunting and loading later, here Geralt stands, fresh off the boat from… Kaer Morhen (I presume?), ready to step into the shoes of the Dragonborn. Arriving in Tamriel via a quest-skipping mod that plonks him at the seawashed banks of Solitude rather than on the executioner’s block at Helgen, he hasn’t been able to acquire any Witcher-appropriate armour yet. You’ll agree, a Witcher can’t be expected to battle striga in a silk cap: 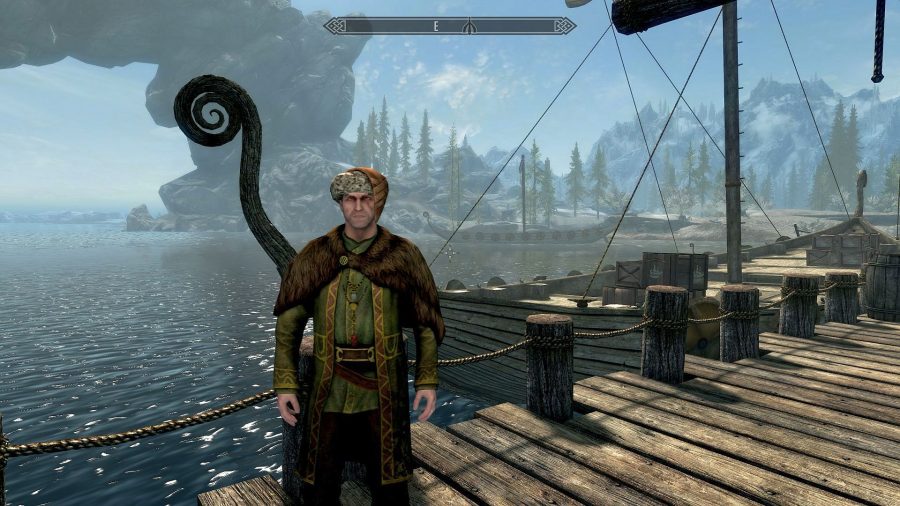 It transpires that there’s only one man in the whole of Tamriel who can be trusted to kit out a Witcher; a Nord named Berengar. Probably not this one, though. He’s dead, apparently. Rumour has it this Berengar can be found at Riverwood, fittingly also the starting point of the Dragonborn’s own journey. Portentous. 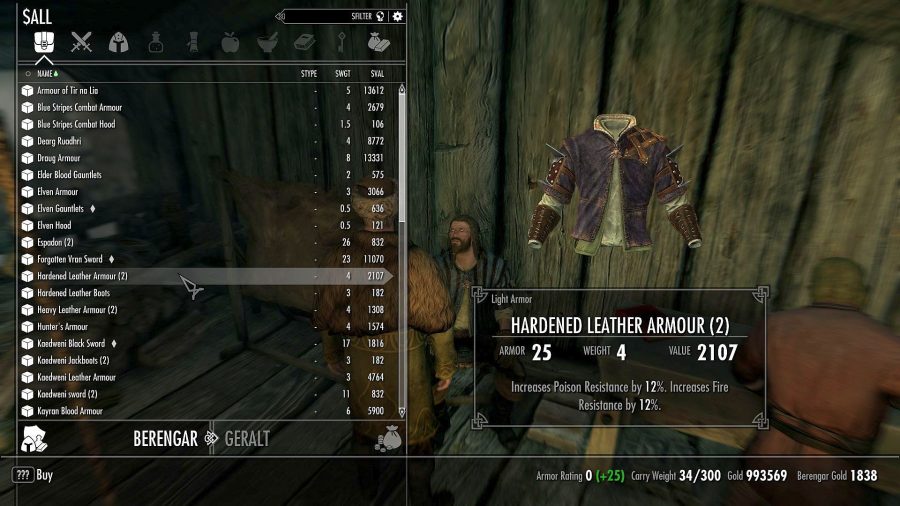 Finding the well-stocked outfitter at Alvor’s smithy, I select one of my favourites from The Witcher 3 – the hardened leather armour – a suitable stopgap suit until I gather the resources I need to craft Geralt’s more iconic Kaer Morhen armour. Something completely necessary and non-optional in the pursuit of the real Witcher experience, I’m sure you’ll agree. 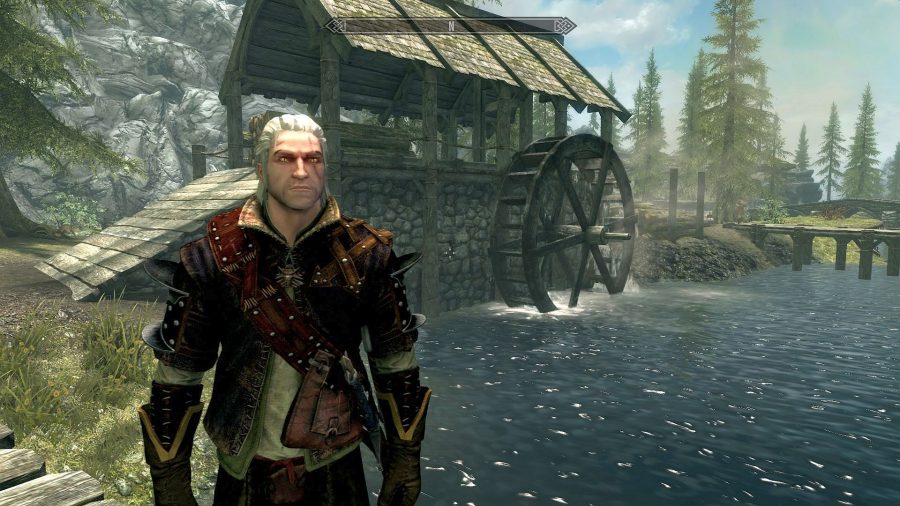 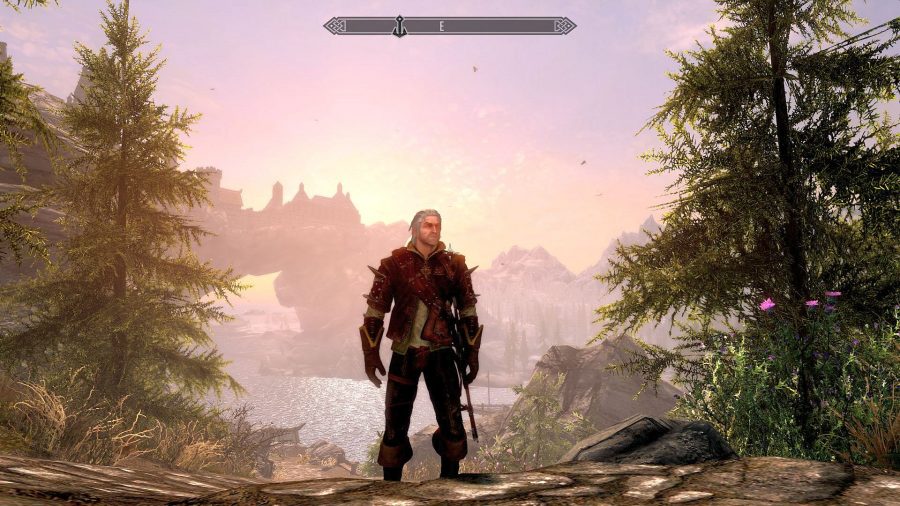 While Geralt usually works alone, a twist of genie magic means he never goes too long without running into a certain sorceress. By some fortune, the Witcher hears whispers Yennefer of Vengerberg has also made it to these distant, dragon-bothered shores. According to these hints (well, the mod’s page), she is to be found in Solitude’s premier tavern, The Winking Skeever.

Heading there Geralt encounters poor Roggvir, who is for the block and about to become a head shorter. Geralt usually works on the promise of coin but, you know, he can’t resist a good scrimmage. Take his, er, quarrel with Renfri’s pals in Blaviken, for example. Sensing a similar opportunity, in he goes. 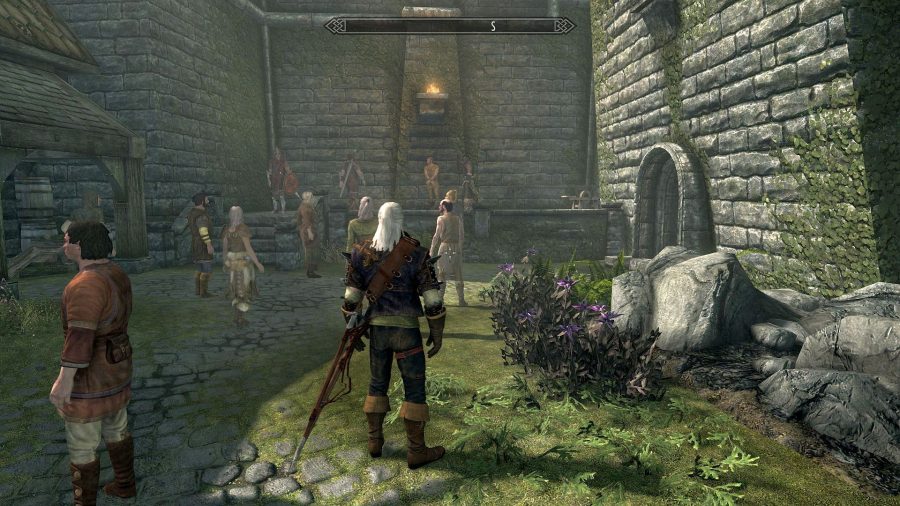 As you can see, Geralt’s swordplay looks sharp against Solitude’s finest, even in the early levels. 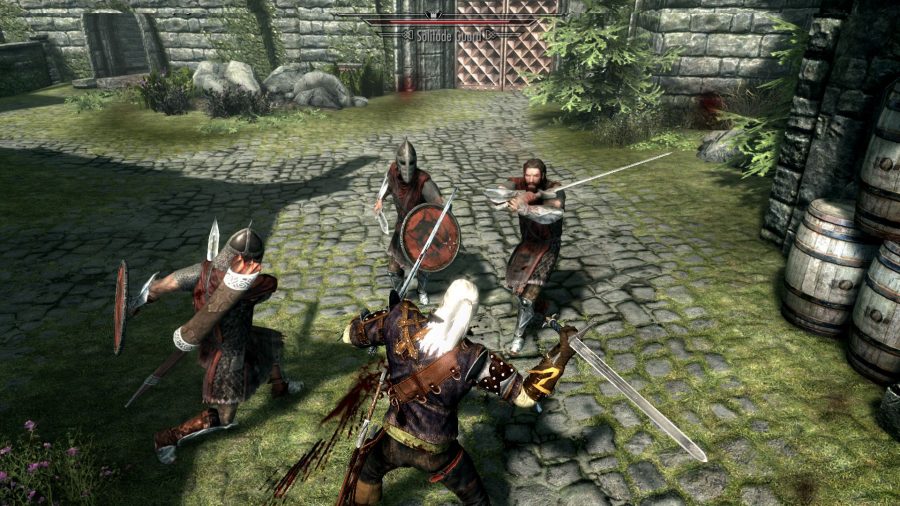 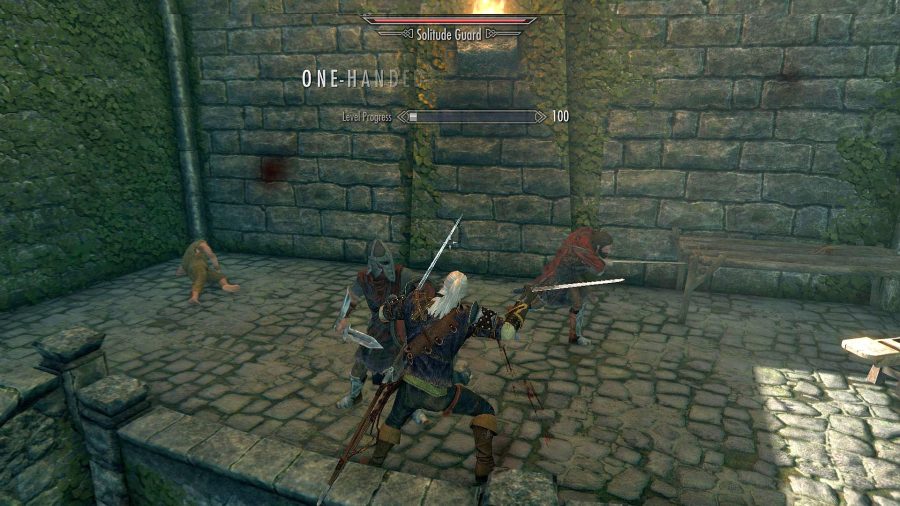 Oh well. Geralt’s more suited to brawling with Howlers and Djinns than Stormcloaks, anyway. One hefty bounty and a couple nights’ stay at the Jarl’s pleasure later, Geralt heads to the tavern and there he finds Yennefer of Vengerberg, supping on a beer. I knock back a couple of Honningbrew meads myself before recruiting her as a (fully voiced) follower to chase down my first contract – some Drowners I hear are pestering folk a little way north of Solitude. 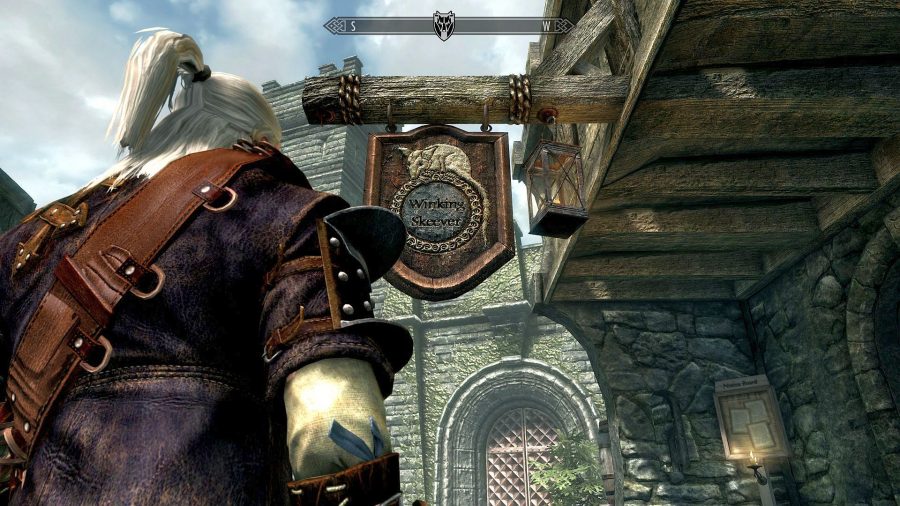 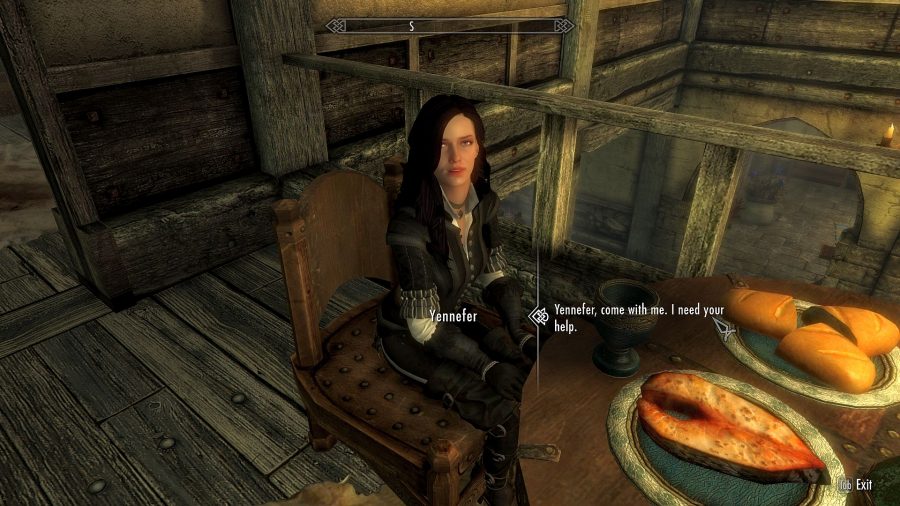 Help me, Yennefer. You’re my only hope. 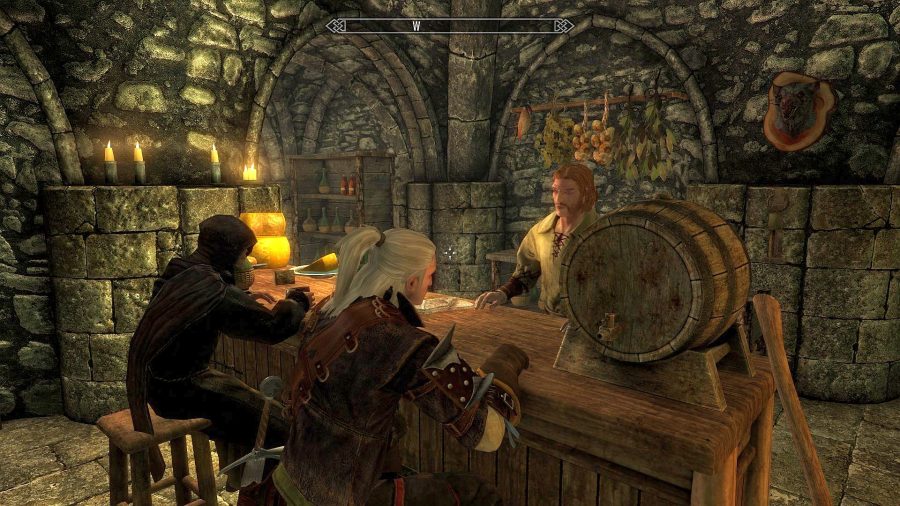 Sir! A mug of your foamiest Honningbrew, and not a moment to lose!

Off we go to put a stop to those pesky Drowners. Along the way, we encounter a few of Skyrim’s native menaces, which act as a handy warm-up for the fight ahead. Mudcrabs, frostbite spiders, slaughterfish – you name it, Tamriel’s most terrifying monsters are out to put a stop to our adventures. Yennefer and I soon see to them. 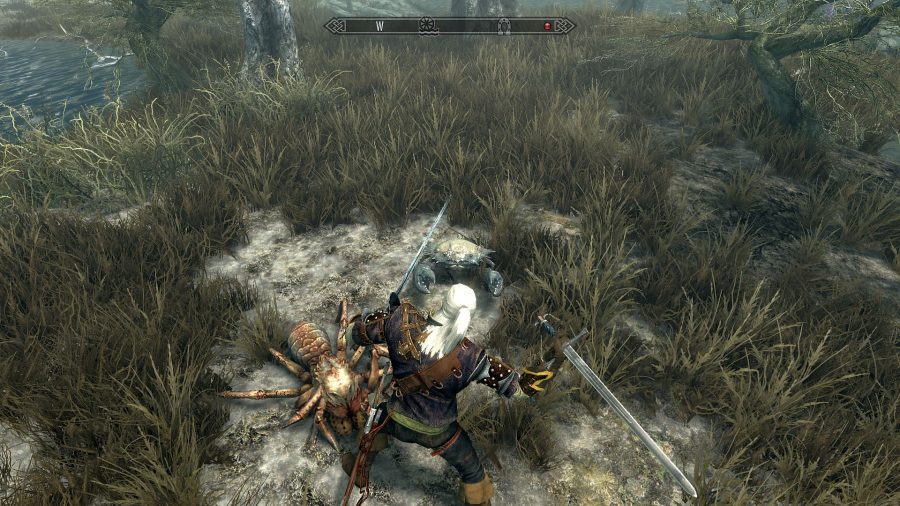 These have got to be worth a few septims, right?

Turns out the Yennefer created by modder Levionte is one hell of a follower to have along for the ride. At even the slightest sign of trouble she charges and unloads a destruction spell so powerful it can bring down a mammoth in three short, sweet blasts. And I bet you were thinking the Witcher creation process was what turned Geralt’s hair grey.

Foes felled and swords downed, we proceed away from Solitude, through the woods, and towards the river. Purely by coincidence, we stumble across a familiar sight – a shack belonging to a certain pup that I would do anything for. You remember Meeko? Yes, I’ve dedicated a feature to him before, too. 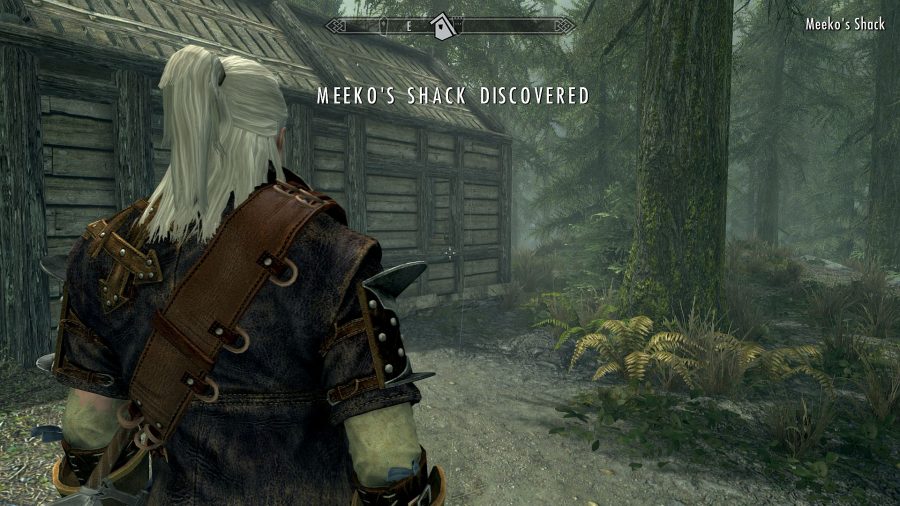 Who lives here, I wonder?

‘Canon be damned!’ I think, as I recruit him to the Witcher’s mission too. If you’re wondering why this little pupper instead of, say, Triss Merigold, sadly I wasn’t able to find an equivalent Skyrim Special Edition mod for Geralt’s other love. But that’s ok – I’m more of a Yennefer fan, anyway (don’t @ me). Ciri? Well, I’d just feel like I was babysitting the whole time. On we go. 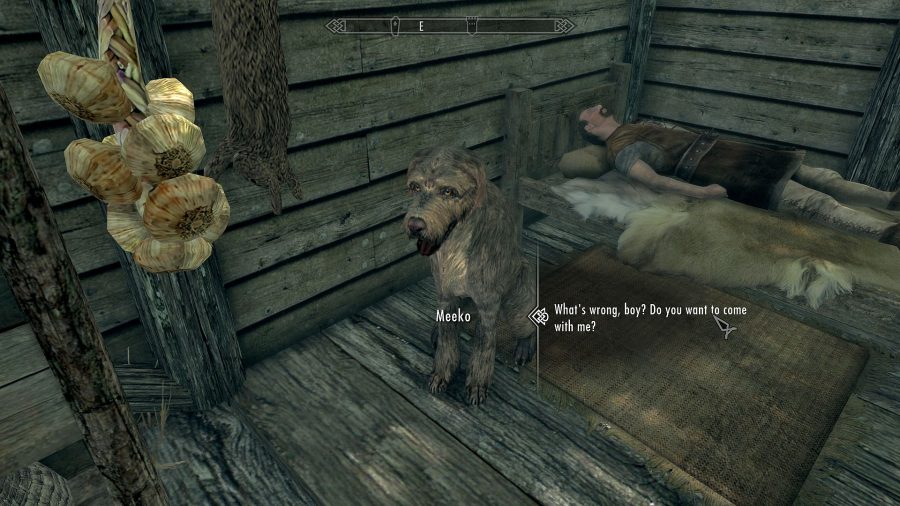 I hope Roach doesn’t get jealous

As we approach the river we spot the dreaded Drowners lurking in the water, which are inexplicably purple rather than the mottled grey-green we’ve been expecting. Must be a Tamriel thing. But before we can engage, a giant, very angry bear – not dissimilar to those in the woods and high mountains of Geralt’s homeland – roars behind us.

We leap into action to bring it down before it makes a meal of us, Geralt with his swords, Yennefer with her gloriously OP magicka, and Meeko with his plucky can-do attitude. 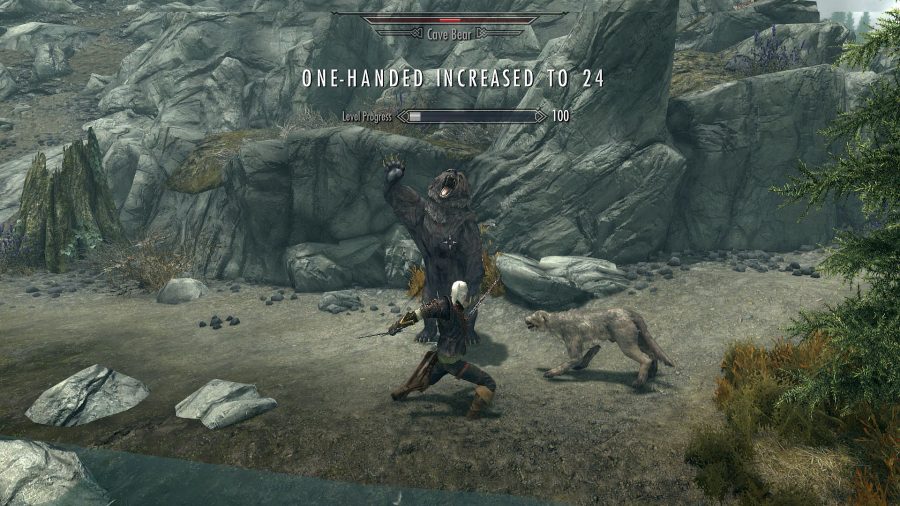 Then it’s time for those Drowners. By now they’ve started crawling out of the water towards us, disturbed by the ruckus we’ve been making, no doubt. They’re tricky little blighters to take down with Geralt’s early level melee skills. Apparently, the boat ride to Tamriel’s made him a little rusty. 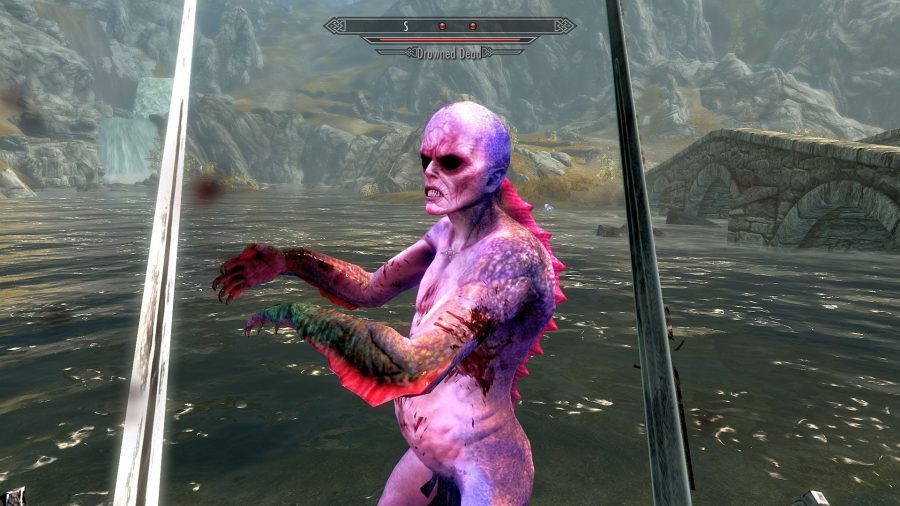 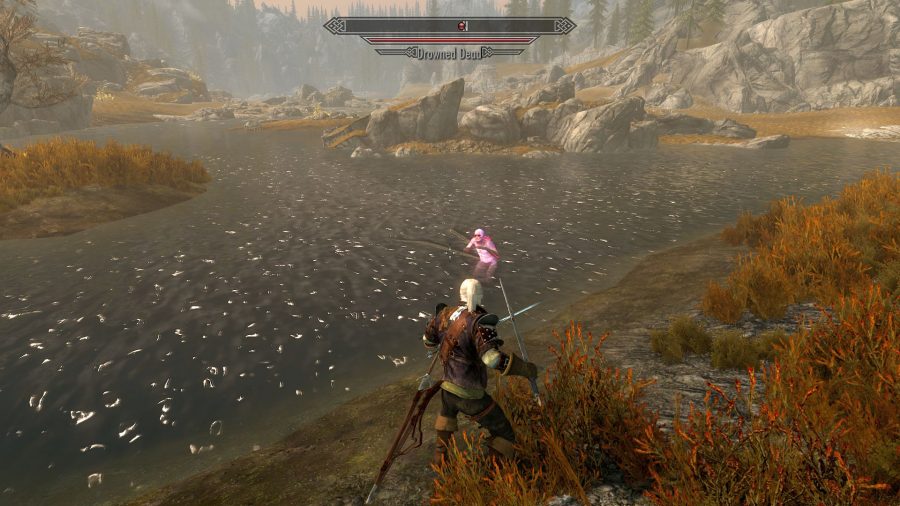 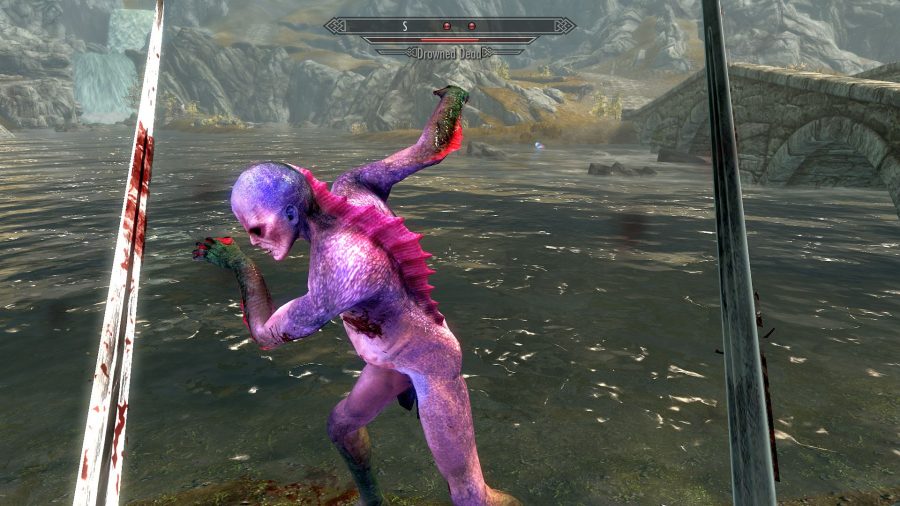 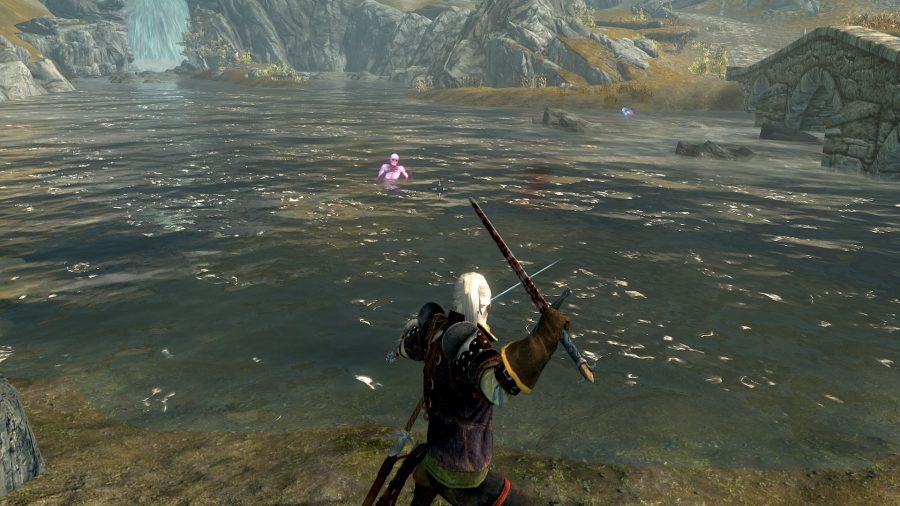 Once they lie slain, we head towards Whiterun to claim a reward, expecting the hardy Nord folk of Skyrim to open their hearts and hearths in a rare show of gratitude, softened by the knowledge these menaces had been finished by we three heroes – at least for now.

If you know the plains just outside of the great city, which lies at the heart of Skyrim’s map, you’ll be aware there’s another chance to wipe out a few more monsters nearby, too. Feeling heady from the recent victory, I just can’t resist the opportunity. So we wander towards the giants’ and mammoths’ lair just beyond the city walls, the thought of a weightier bag of gold overcoming my level 24 anxieties. Also, I have Yennefer. 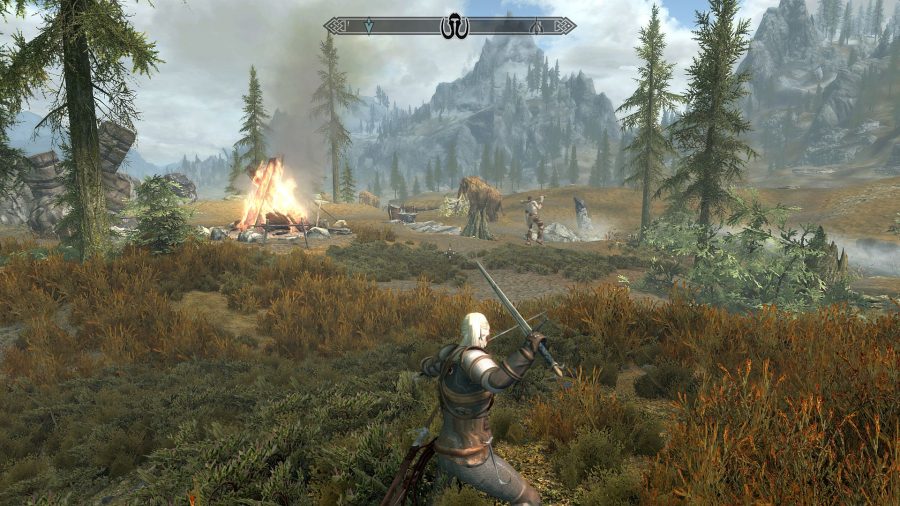 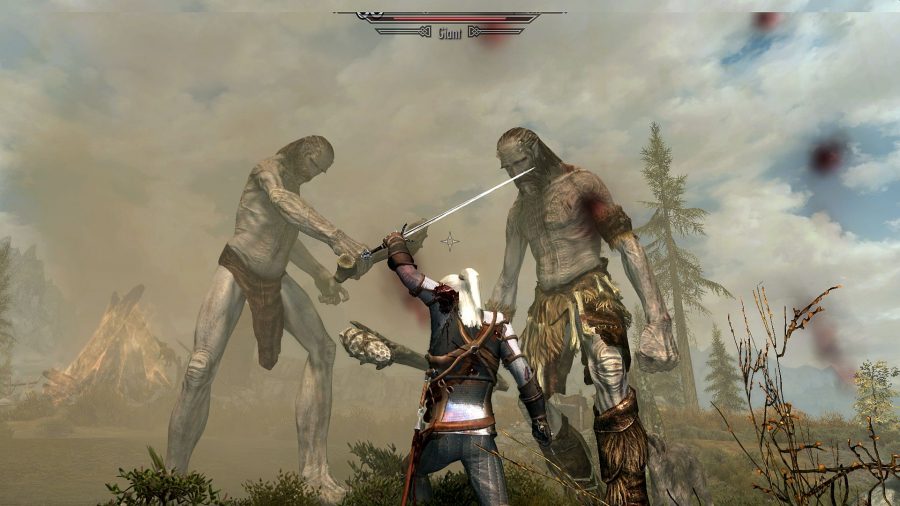 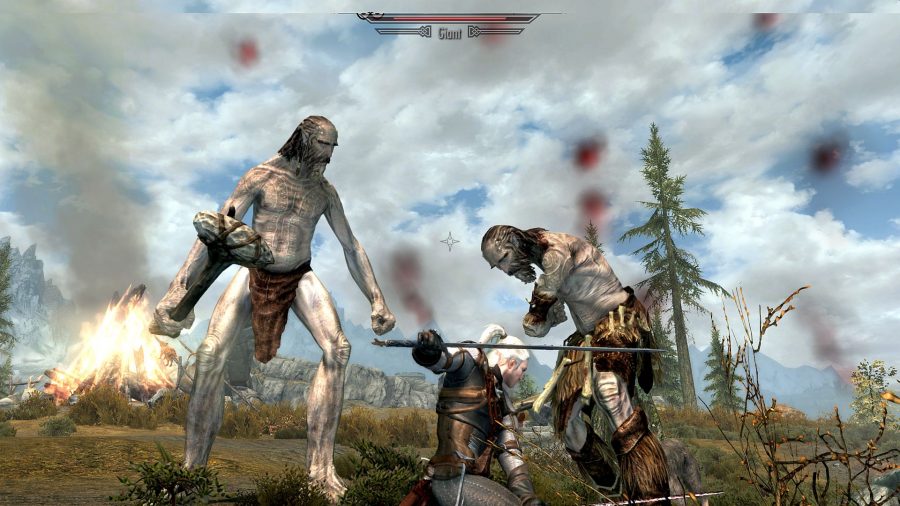 Who needs a sorceress, anyway? 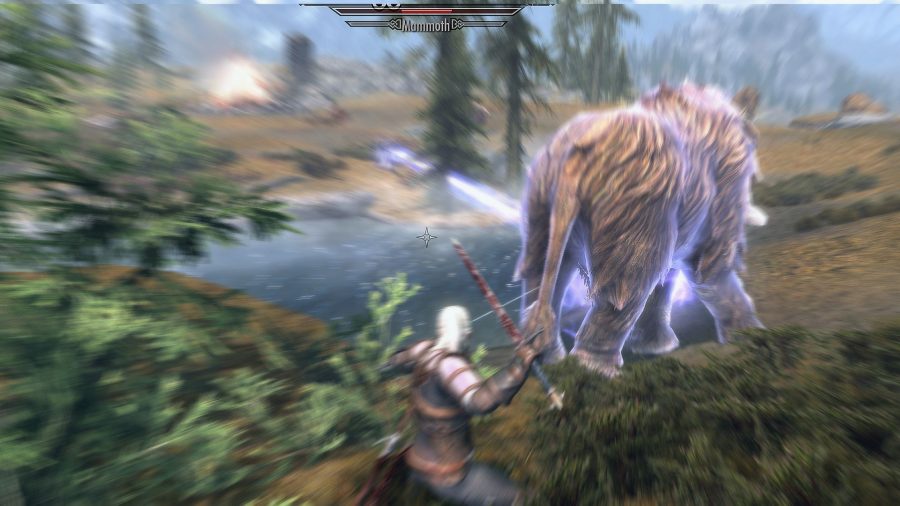 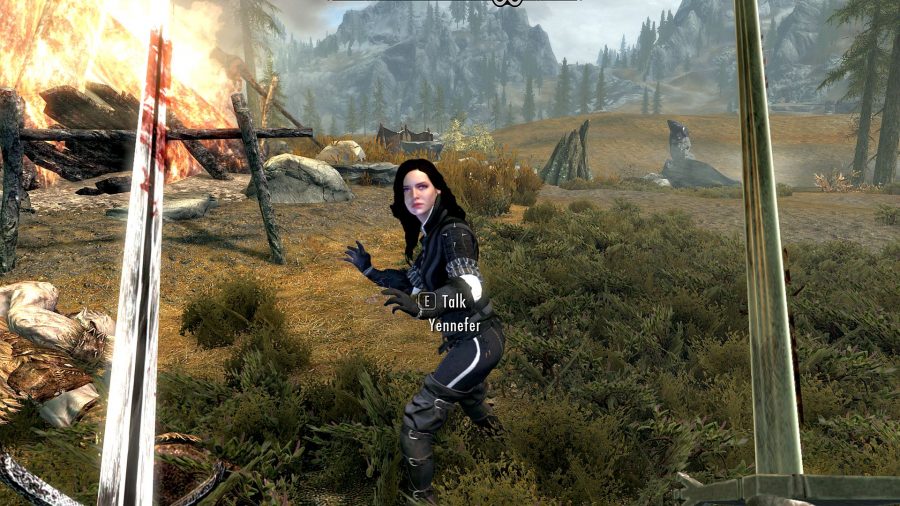 I told you she was good.

After a hard day’s work in Geralt’s cat school boots, we head to the nearest pub to delight some villagers with tales of our heroics, claim those septims, and hear a bard sing ballads about us to the sound of a lute for a hearty ego boost. Lovely. 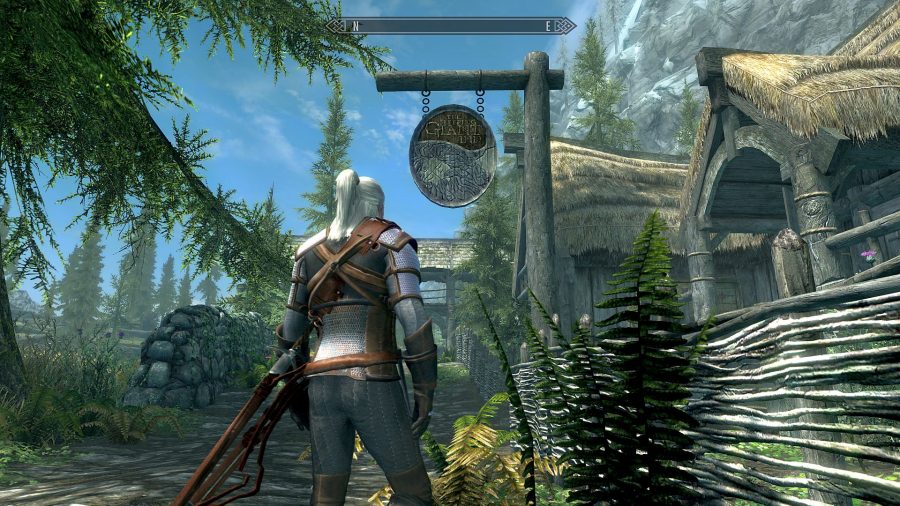 That giant’s definitely sleeping now, thanks to me. 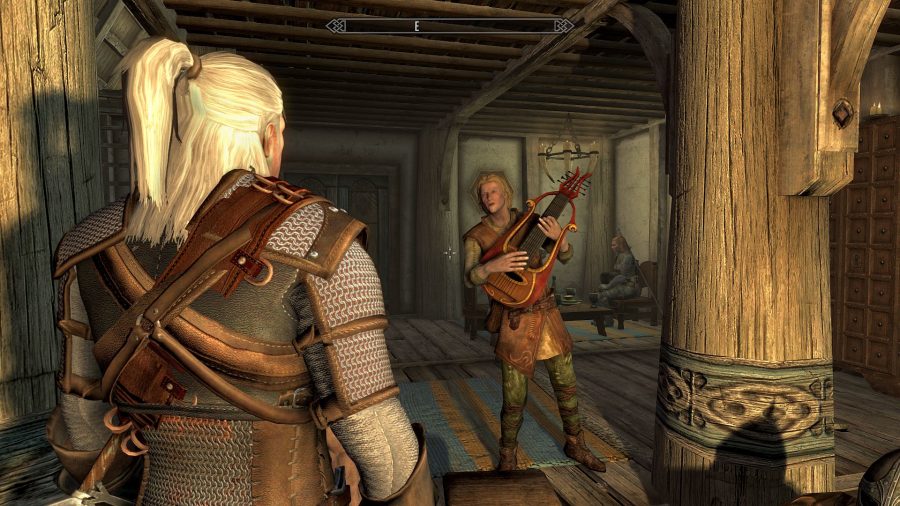 Toss a coin to your Witcher, oh valley of plenty…

While we sadly didn’t spot many more of the beasts and bothersome foes from the world of the Witcher this round, I’d say Geralt’s first day in Skyrim was pretty well spent – and those doubloons well earned. Now, I just need to see a Khajiit about a horse…

If you’re keen to bring some of Andrzej Sapkowski’s world to Skyrim, you can find The Witcher experience Skyrim mod here, as well as mods to bring Yennefer, Ciri, and Geralt’s armour into the game here, here, and here, too. Plus, you can bring that now famous song from Netflix’s show to the game, too, with this mod. Street entertainers will be clamouring for the good people of Skyrim to send some septims your way all over the land.