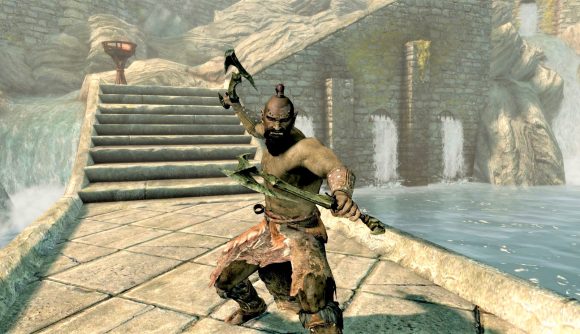 Skyrim fans will know the RPG game’s loading screens well. The black backdrops filled with all kinds of weird and wonderful Tamriel folk (who you can move about and whoosh almost off screen while you’re waiting if you’re daft like me). Many of the character builds are really cool or intriguing – or both – and one fan has been inspired to start recreating them in-game.

Skyrim fan Ivanttoridemybicycle has posted the latest of their creations on the fantasy game’s subreddit, announcing that they’ve recreated the Redguard seen in its loading screen as the playable character. As you can see below, it’s a really faithful rendition of the one you’ll have seen fill your screen when you’ve just been punted into oblivion by a giant’s club for the umpteenth time. The grey headscarf, brown robes, hefty belt buckle – heck! – even his pretty grumpy expression – the fan’s got his look down to a tee.

You can check out all of the Skyrim loading screens here if you’re keen to compare it to the original (you’ll have to scroll down a bit). And, this is far from the only loading screen NPC the creator’s cooked up so far.

They’ve listed a whole bunch they’ve already made in the post’s comments, which include “orc berserker fella”, a Breton mage, Dunmer assassin, Argonian barkeep, which are all equally accurate portrayals of the real deals, as you can see if you compare them to the originals. And, uh, there are also some others the creator’s working on with pretty hilarious monikers, like “cannibal Legolas” and “sexy Swedish man”.

I made the Redguard from the loading screens. from skyrim

Oh, and the creator has also got some others they’ve made coming to Reddit for their own time to shine, too, which include “cat burglar”, “Nord yelly man”, and, er, the “Thalmor dipshit”. Well, who really likes the Thalmor, anyway?

I made the Orc from the loading screen. from skyrim

Fortunately, there are some Skyrim mods out there already that bring the loading screen characters to your game – such as these Redguard and Wood Elf options – so if you’re keen to achieve something similar, you can do so.