Skyrim and Dark Souls are two of the most beloved RPG games of our time, with two distinct approaches to combat. Fans of both have posted mods in the past aiming to mash the two together – such as this Skyrim mod that makes combat reach more like Dark Souls – and now another modder is aiming to overhaul Skyrim’s melee weapon animations to make them more like those in FromSoftware’s action-RPG.

A new mod posted by creator Miken1ke on Skyrim Special Edition’s slice of Nexus Mods adds “animations for the battleaxes and warhammers inspired by Dark Souls”, which – as you can see in the preview clip below – gives Skyrim’s own movesets a whole other flavour. Swapping out Skyrim’s more single-strike, slash-and-bash style, the mod adds more chained swiping movements to the animations of its chunky melee weapons, and flourishes reminiscent of Dark Souls’ approach to combat.

Similarly, another of the creator’s “Elder Souls” recent mods (made in collaboration with modder Distar66, who helped create the SkySA animation framework that these mods use), brings sweep attacks à la Dark Souls to the open-world game, allowing you to, well, sweep multiple enemies off of their feet rather than just one.

Another, posted earlier this month, similarly overhauls sword animations to give them a Dark Souls flavour – and, it sounds like we can expect to see more, as the creator explains that this is the first mod in project that’s looking to overhaul all of Skyrim’s weapon type animations. 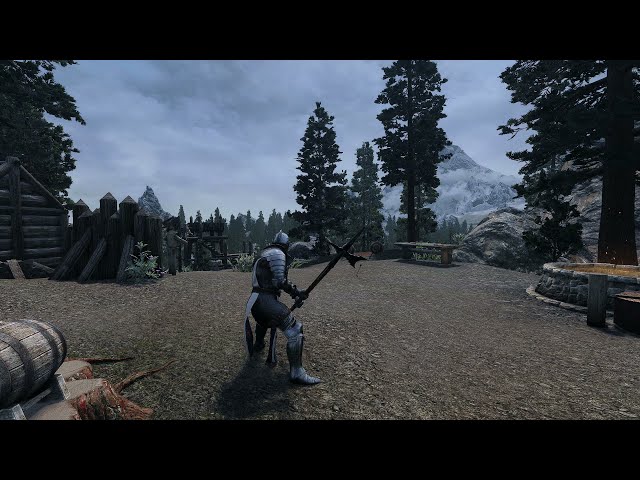 If you’re keen to bring a dash of Dark Souls to Skyrim, you can find the latest (battleaxe and warhammer) mod here and the others via Miken1ke’s Nexus Mods ‘user files’ section on the site (note – some images on the sword animations mod page are NSFW!). As ever, mod with caution and be sure to check out our rundown of the best Skyrim mods on our home platform if you’re keen to see what else is out there.