Skyrim, with its rich story, incredible attention to detail, and lush snowy landscapes, has to be one of the most immersive gaming experiences of all time, though there’s one tiny aspect that’s always got a little in the way of this.

All of the NPCs, and the Dragonborn themselves, appear to have come down with a bad case of Rockjoint, meaning they all move with the grace of a particularly clumsy plank of wood, interacting with the magical world they inhabit on a pretty basic level in most respects. It’s hardly a game-breaking concern, but for those who really want to get their teeth into roleplaying a mighty Nord barbarian, cunning Khajiit rogue, or a devious Dunmer warlock, it is a tad jarring to see characters moving quite so awkwardly.

Thankfully a new mod remedies this immersion blocker by giving the residents of Skyrim a whole new lease of life. JaySerpa’s Immersive Interactions mod does exactly what it says on the tin and allows the Dragonborn and NPCs to perform context-aware animations while interacting with the world, breathing a deep new level of realism into the game.

The mod inserts short animations into the game, which happen whenever the player character interacts with the world organically (without going through a menu). These animations allow the Dragonborn to connect with their surroundings in a way they simply couldn’t before, including mourning fallen followers (so you can now feel doubly guilty about accidentally killing Lydia again), knocking on doors, and saluting Thanes. 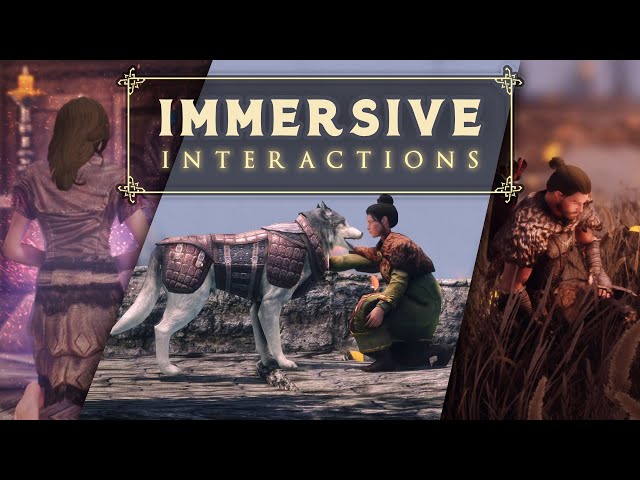 Best of all, you can finally treat your four-legged companions (not the werewolf ones) with the respect they deserve. Yes, you can finally pat your horse or dog when they’ve been particularly brave. Just be sure to put away your sword before petting them.

The mod also includes some “special interactions” that change how you interact with objects in the game world, letting you put out fires, empty kegs, and practise your punches on poor training dummies. You can check out the full list of interactions here.

It might not be as dramatic a mod as filling the world with penguins, giving the Dragonborn Mandalorian armour, or turning Riften into a ‘cheese city’, but for those who like roleplaying, this mod has to be a contender for our 100 best Skyrim mods list. So if you want your Dragonborn to move like an actual human being (or elf, or Khajiit, or Argonian), you can grab the mod over at Nexus Mods.

A word of warning from JaySerpa, though. While Immersive Interactions is compatible with a range of other mods, it may clash with the Pet The Dog standalone and Dynamic Things Alternative mods due to overlapping features, so as always mod with caution.