Update – March 19, 2021 The modder has let us know a city bursting with cheese was the plan all along

What, really, makes something one of the best Skyrim mods around? Spectacular visual enhancements? Of course. Huge new quests packed with exciting stories and new NPCs? Sure. Combat overhauls that let you play it like Sekiro? Absolutely. Then there are those that are just really funny, such as new fan creation that turns Riften into a “city of cheese”.

Skyrim fan WickWah posted a creation on Nexus Mods in late 2019 that turns the RPG game’s commercial heart, Whiterun, into a “city of trees”. It’s a total retexture mod of the city that adorns it with a load of gorgeous foliage, including many towering new trees that give it a very different, very beautiful appearance. The modder jokes that they were aiming to do the same for the south-western city of Riften, too, but instead it’s become a city defined by giant wheels of smiling dairy products – and it’s quite something to behold.

The images show a gloriously overhauled Riften peppered with giant (seriously, huge) wheels of Eidar cheese amongst its buildings, on its rooftops, and – well – everywhere. And, they’re all grinning away, too. Perhaps they’re in on the joke.

“It was supposed to be trees,” the modder jokes on the page, saying their program’s autocorrect feature had different plans, changing it to “cheese” instead. The modder jokes, using a Despicable Me-inspired meme, that they noticed when coming to make the mod that autocorrect had turned foliage into fromage. However, WickWah has reached out to let us know a city positively packed with giant cheese wheels was the plan all along following a funny Discord chat, and that the mod “was made 100% with cheese in mind”. 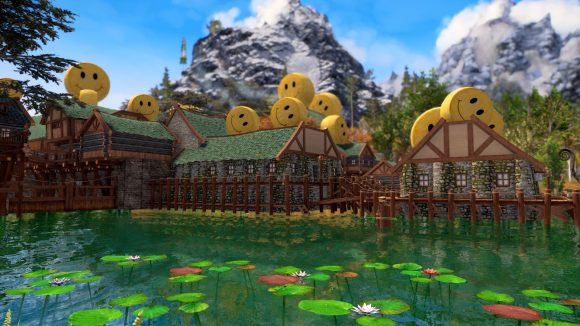 Well, however it came about we’re very glad it has. Tons of enormous, smiling cheese wheels are just the thing to give Riften a delightful new makeover, we’re sure you’ll agree. If you’d like to bring the “cheese-based overhaul” of Riften to your Skyrim universe, too, you can absolutely do so by heading to Nexus Mods right here.

Meanwhile, be sure to take a peek at our rundown on the best open-world games on PC if you’re a Skyrim fan and keen to see what else is out there. Perhaps we’ll see more cheese-based takeovers of other games’ great cities in the future, too. One can but dream.