Almost since the Skyrim's release a decade ago, the RPG game's community has sought to rewrite one of its most memorable quests, Paarthurnax. The mission puts you in a tricky spot, by making you decide whether to help the Blades by felling the majestic elder dragon that gives the quest its name – and, while it's optional, you can't progress it if you don't. Now, a mod has landed that adds a fully voiced, expanded new take that looks set to make the decision an even richer, more meaningful affair.

Prolific modder JaySerpa describes their new 'Paarthurnax – Quest Expansion' mod as a “fully voiced, quite expanded new take on the quest Paarthurnax, giving both the Blades and Paarthurnax good reasons for their stances, and you, Dragonborn, the final choice”. Instead of using an AI voicing tool, the mod draws on lines of dialogue from the base game to create around 60 new ones.

The modder says that these “pretty much double” the quest's length, and offer far more context to help you make this very difficult decision, by getting to understand the two sides' perspectives in much more depth. For example, you'll get to uncover more about it why would be huge risk to let the dragon live from the Blades' point of view.

You’ll also get to dig deeper into Paarthurnax’s perspective, such as the reasons for his past actions against humankind, whether he feels remorse, and if he believes he’s worthy of humans’ forgiveness. The mod also lets you explore his current and future actions – so, what he might be up to in having the other, waking dragons follow him, and what he’s planning now Alduin’s no longer a concern. You can get a taste of what the mod adds in the clip below: 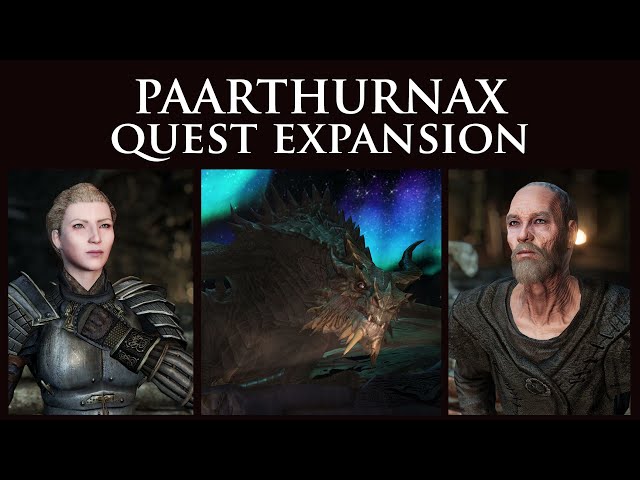 All of this extra depth and understanding is aimed at leading you to making a more meaningful and informed choice when the time comes – and to bring out the ‘grey’ areas in the situation, too, so don’t expect it be an easy choice.

The two options you’ll get are to spare Paarthurnax by essentially reminding Delphine of her and the Blades’ role – to support and follow the Dragonborn – convincing her it is your decision alone. You’ll have to go through Esbern, too, once Delphine’s been brought on side, and at this point you can either also convince him (with the help of some dragon shouts, perhaps) or allow him to persuade you. “If you decide to spare Paarthurnax, both the Blades and the Greybeards services will be available to you,” JaySerpa explains. Huzzah.

Battle on: Pick up Skyrim at Fanatical here

Alternatively, if you decide to take out the elder dragon after all, you’ll have to face a much tougher fight than the base game’s quest entails, as two others will decide to join him. So, you’ll be battling three dragons at once, all as they’re spewing “special dialogue lines” at you. Gulp.

If you’re keen to grab the impressive, expanded mod for yourself, you can find it at Nexus Mods right here. As ever, mod with caution, and be sure to check out our rundown of the best Skyrim mods and best fantasy games around at those links.