Despite being one of the best and most beloved RPG games of all time, Skyrim has seen a lot of mods aimed at overhauling its combat in its near-decade out on PC, with players looking to add extra depth or new spins to the base game’s battling. Some Skyrim mods, however, take this tinkering another, impressive step further, such as a new combat overhaul that essentially turns it into Sekiro: Shadows Die Twice.

Creator InpaSkyrim describes their new ‘Inpa Sekiro Combat’ mod as “hardcore”, with it offering a complete rework of TESV’s combat system to make it far more like FromSoftware’s 2019 action-adventure game. The mod changes a whole bunch of mechanics to achieve this – for example, swapping Skyrim’s stamina for Sekiro’s posture, and adding a ‘poise’ system. These cause your Dovahkiin to become vulnerable if their posture maxes out, and “unconditionally stagger” if a foe’s attack lands.

To avoid this, in comes Sekiro’s defence system. There’s parrying, both against arrows and melee attacks, which depletes your posture (and you’ll be knocked out if it hits zero). However, nail some sweet blocks and you’ll save your health.

Parrying against magic attacks, on the other hand, depletes your magicka, and you’ll stagger if that drops down to nought – but with a flash of your sword, you can deflect plenty of Skyrim foes’ magic tricks. Dragon shouts not included, sadly, but then you want the game’s biggest baddest beasties to keep some special tricks up their sleeve. 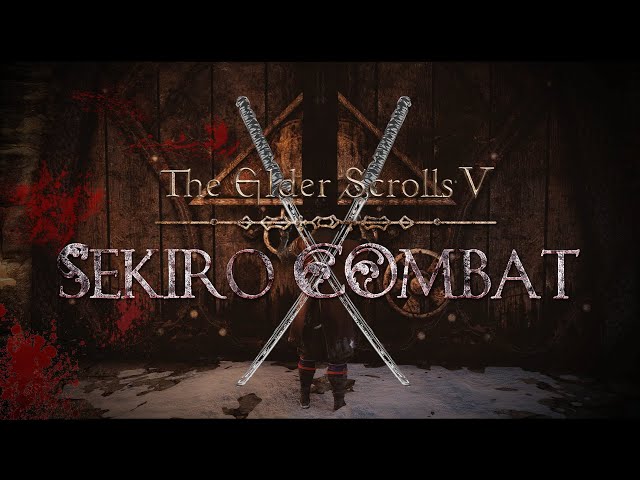 Like Sekiro, it seems the mod’s vitality regeneration and posture systems are intertwined – that is, the recovery rate of posture will correlate to how jammy your health bar is. Along with other updates, such as ‘perilous attacks’, a bash system, rapid parrying, resurrection, assassinations, and more, the open-world game’s combat really does seem transformed into a system very evocative of Sekiro’s. Check out the clip above to get an idea of this in action.

Best of all, the modder’s incorporated Sekiro’s distinctive ‘Shinobi execution’ feature, so you can finish off draugr, daedra, and dragons alike Wolf-style. With the mod in play, an enemy’s posture being broken triggers a “rec circle” in the centre of their body, flagging their vulnerability – at which point you can strike, dealing the Shinobi finisher.

For full information on how the mod works, and to grab it for yourself, head to Nexus Mods here. As ever, mod at your own risk! You can also see what happens when a player downloaded over 100 mods to turn Skyrim into Sekiro if you’re curious to find out.