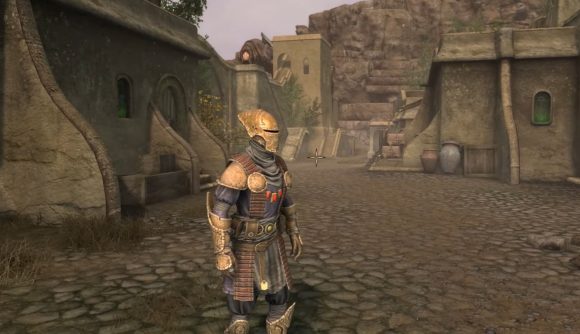 Skywind has been an incredibly long time coming, but it’s continuing to make progress as a Skyrim mod. The modders behind the massive project to rebuild The Elder Scrolls III: Morrowind in the Skyrim engine have taken the opportunity at Gamescom to showcase ten minutes of gameplay footage from the project, and it looks just as terrific as you might hope.

It’s a straightforward walkthrough of a simple quest, but if you’ve got any nostalgia for wandering in Vvardenfell, it looks fantastic. All the mechanics look to work just as they do in Skyrim, though there are some notable differences – like the massive volume of dialogue choices you have when interacting with NPCs. The new voice acting recorded for those characters is pretty solid, too.

“While we want to show off iconic things like levitation, cliff racers, and new dungeon types, we felt the need to show something more polished and presentable for Gamescom,” the developers say in the video description. But you can expect more gameplay “in the coming months that will give you a rougher but more in depth look into the current state of the game and its unique systems.”

But why read when you can watch?

Don’t miss the Skywind trailer released a couple of months ago, either.

Between the new Skyblivion footage and this, it’s been a good week for Elder Scrolls fans. These mods might actually manage to launch before The Elder Scrolls 6 release date, judging by the results we’re getting to see right now.