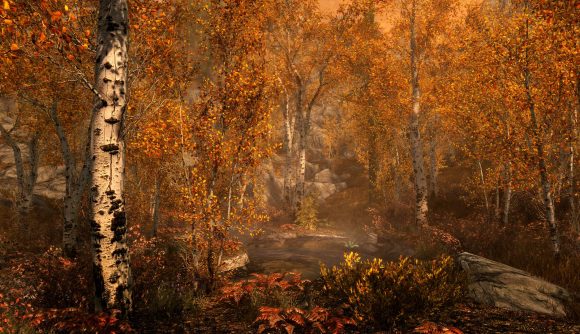 Beyond Skyrim is an enormous modding project aiming to bring basically every region of Tamriel to life in Bethesda’s 2011 RPG. Along with locations from the RPG games series and its extensive lore, such as Morrowind, Cyrodiil, Iliac Bay, and Elsweyr, it seems Elder Scrolls fans will one day get the chance to head to the home of the Bosmer, too – a group of modders, some of whom additionally work on Beyond Skyrim, have announced a new project – The Elder Scrolls: Valenwood.

“We have been working hard to write, draw, and model the unique forests, creatures, and locations of Valenwood to create a whole new expansion for Skyrim taking you to the southwestern corner of mainland Tamriel,” Reddit user and member of the mod’s 65-strong team Robcbwilson1  announces. Here, you’ll “be able to engage with the local population and the Thalmor”.

The modder’s added a link to Fickr here showcasing the art and designs the group’s created for the Valenwood-Skyrim project so far. They’re pretty spectacular, really conjuring a sense of the region’s dense, forested environment and the Bosmer’s weaponry from the open-world games series’ lore. Robcbwilson1 adds that the teams got some “3D work underway to create these amazing pieces”, too.

While Valenwood hasn’t yet been the setting of a title in the Elder Scrolls game series, fans might recognise the name of Falinesti – the ‘Walking City’ tree city, which literally moves around according to the seasons, and is Valenwood’s main city. According to the post, this will be “one of the major locations the player will be able to visit” in TES: Valenwood.

For day one, we are showing off our logo as well as environmental art (the Broken Coast by Samuel, Malabal Tor by zebotc and the Northern Woods by Nil_Busque). The logo itself was made by øctet and Aluckymuse. pic.twitter.com/0JdrOknIdB

As for the region’s people and politics, the modder explains: “You will meet many [Camorans] on your travels, including helping with the succession crisis that has engulfed Valenwood with the death of King Elebor, latest monarch of the line of King Eplear. He was installed with Thalmor backing in 4E 29 which brought Valenwood into the Third Aldmeri Dominion. With Valenwood split on who will take the throne, the fate of the Bosmer falls to his children. Olalorn, his eldest raised in Alinor to be a king of the Aldmeri Dominion and favourite of the city folk, or Casdra, his daughter named as his heir on the king’s deathbed and favourite of the tribes people.”

On Day Two, we are showing off some of the various flora and fauna you will find on Valenwood. We have the Graht Oak (by cbkintner), a Kollopi (created by mikren) various plants drawn by Aluckymuse and finally Winged Mimics (gogolimbo). pic.twitter.com/jwGZAx4tWx

There’s no word yet on a timeframe for when the modding project might launch, and given it’s only just been announced, it’ll probably be a fair while before we can head into the depths of Valenwood. However, there are already plans for a “pre-release area” (the Arenthia Hills), and it sounds like there’s some strong experience in exactly this kind of work on the team. Robcbwilson1 says in the post’s comments that they’re the lead for Beyond Skyrim: Elsweyr and the other person heading up the project, MrJGT, is Beyond Skyrim: Cyrodiil’s landscaping lead.

Today for day three we are focusing on weapons and armour. We have a variety to show off including bone weapons and armour (Brian Sirith and Samuele), bone and horn bows by zebotc and finally hide armour (hannie.ars). pic.twitter.com/I1B8lka3uI

The modder explains this means “collaboration between the provinces won’t be an issue” in relation to those two mentioned above that neighbour Valenwood and are part of the Beyond Skyrim project. From their reply, it also sounds like there’s a possible aim to “get into Beyond Skyrim in the future”, though this isn’t confirmed as such by the comment.