If you’ve ever been wandering the frosty, Forsworn-filled peaks and valleys of Skyrim wondering where you could pick up a quest for the reward of a few septims, you might have thought, ‘Hey – The Witcher 3’s notice boards would come in handy right now’. If so, you’re in luck – a Skyrim modder has brought exactly these to Bethesda’s behemoth RPG game.

Oaristys’ ‘Missives – The Witcher board HD’ mod builds on an earlier (and excellent) creation by Skyrim modder IronDusk33, which adds localised quest-giving notice boards to the open-world game’s nine hold capital cities. While the original added functionality reminiscent of The Witcher 3’s own versions, offering radiant quests with a range of difficulties and rewards, Oaristys makes them the real deal.

The new version plucks the exact boards from, well, technically The Witcher 2, but The Witcher 3’s are more or less identical, so you can bring a dash of Geralt’s most recent adventure to the Dragonborn’s in authentic style. There are three variations included in the mod, and the creator describes the board model as “beautiful”, having “4K, 2K, and 1K textures”.

You can have a choice of two different notice types, too (one of which uses JaySerpa’s gorgeous missive note retextures), and some boards will appear a tad different depending on where you are in Skyrim’s world. 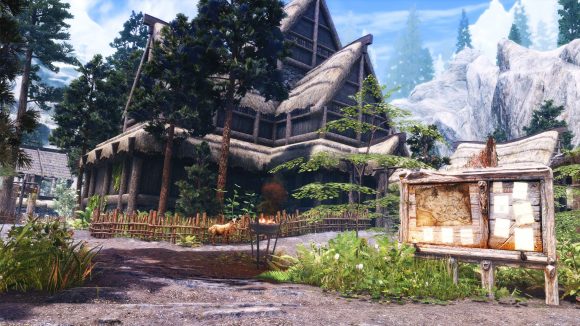 The mod would be perfect if you’re looking to create an immersive Witcher 3 world in your game, or on the lookout for some more avenues to earn the Dragonborn a handful of pennies. You can pick it up at Nexus Mods here if you’re keen, and we also have a rundown of the best Skyrim mods on PC at that link if you’re keeping an eye out for more.

Or, you can read about what happened when I tackled Skyrim as The Witcher if you’re keen to see how Geralt and Yennefer fare in Tamriel.