The Escapists is that clever sandbox game in which you dig tunnels, shape tools and memorise guard patrols, all while doing your chores to keep up appearances – with the eventual aim of Rita Hayworthing it outta there.

The idea originated with solo developer Chris Davis,  who’s now building on his ideas in solitary confinement. Publishers Team17, meanwhile, have taken the series in-house for a spin-off.

The Escapists: The Walking Dead isn’t so much sequel as sideways leap: a bold engine rework that pulls characters from the comics and throws out concealment for the charisma of deputy Rick Grimes.

Team17 lead games designer Grant Towell had been toying with a pitch for an undead simulation, before realising that The Escapists was the perfect scaffolding, and The Walking Dead the ideal narrative tarpaulin (shut up, YOU’RE a convoluted metaphor).

“It’s a good fit,” says Towell. “I thought, you know what, that could be something special. We threw about a bit of concept art, drew up Rick, and it was like, ‘This is going to work’.”

A team of fewer than ten have been working on the project since the beginning of the year – and have wound up with something that works quite differently to vanilla Escapists.

Towell correctly notes that some of the “core fundamentals” are there – but they’re turned to new ends. There’s that same focus on routine. But instead of carrying out tasks to avoid altering the guards to your antics, you’re doing them to keep your camp vigilant against attacks.

As squinting western hero Rick Grimes, you’d better turn up to morning roll call to dispense words of encouragement from the comics, while your fellow survivors “hang on your every word”. 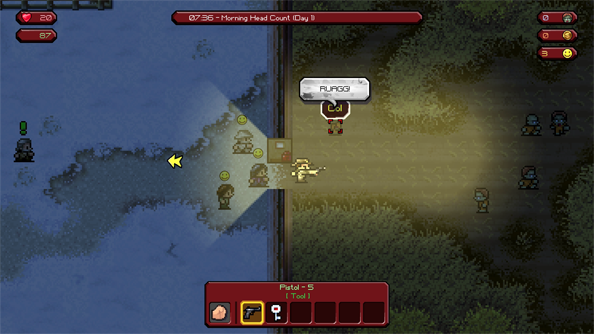 “The more you neglect to keep up the morale of the group by tending to headcounts and whatnot, the more things will gradually just turn to shit,” warns Towell. “It’s better that you keep everyone together and do your tasks.”

Lose the trust of the NPCs and they won’t follow you – leaving you with fewer hands to complete tasks around camp.

“It’s all about you being a good leader and keeping up the front that everything’s okay,” adds Team 17’s Adam Riley. “Making sure that you’re still visible.”

You’d better keep on top of your camp maintenance, too: building barricades, and doing your laundry in the name of infection control. Slack off, and your overall threat level will grow – visible as a rising number in the top-right corner of the screen. As it does so, zombie spawn points will creep from the the outer corners of the map towards your safe zones. Leave the washing unattended for long enough, and walkers will start showing up in the laundrette.

“[It’s a] bit mean of us,” smirks Towell. “You’ve always got a good footing to start off with, and it’s up to you to keep the threat level down. There’ll be that odour of threat around the camp.” 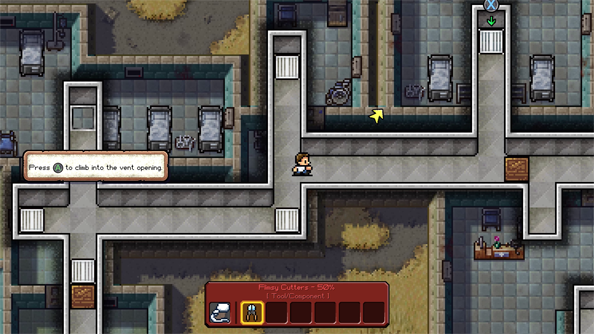 The Escapists: the Walking Dead is still a sandbox, a pile of potential tools caught up in a clockwork camp. But the switch of premise has stripped the game of its one, simple objective: get out.

“Obviously it’s very clear from the off when you’re in a prison – you need to escape,” says Team17’s Adam Riley. “We’ve had to turn it on its head a bit.”

Expect a series of narrative goals for each scenario instead. The team have worked through Robert Kirkman’s story and picked out the natural homesteads – the prison, naturally, but also other places the extended Grimes family have settled over the course of the comics.

At Hershel’s farm, your key objective is to craft a makeshift operating kit – pieced together in traditional Escapists fashion using acquired items – so that the venerable vet can perform life-saving surgery on a wounded Carl. At the same time, you’ll need to attend to the gastronomic needs of the dead cooped up in the barn.

The Escapists was something of an 8-bit Hitman in its open-endedness, and Team17 are keen that players still have plenty of choice in how they go about reaching their goals. Need to turn on a generator in a locked building? Sure, you can find the key. Or maybe zipline across from the roof opposite. Or knock through a wall – but risk bringing down the dead with the noise. 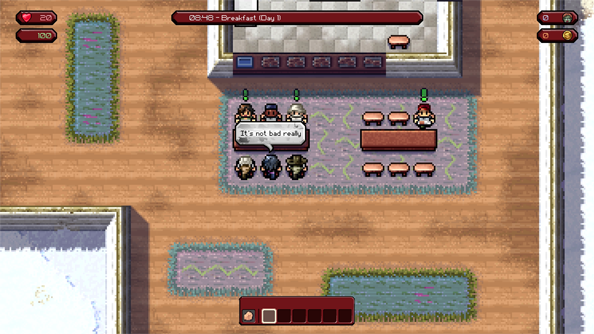 Penalties for discovery aren’t so severe as they were in The Escapists – a conscious point of departure.

“We’ve removed the harshness,” explains Towell. “If you chipped once through a wall at the wrong time of day, you’d be bombarded with this big dialogue and have your items stripped off you. We’ve tailored it [into] more of a forgiving experience.”

Start hammering at an ill-advised hour, then, and you’ll find nearby walkers wander closer to investigate. A risk, but nothing the distraction of a crafted radio or hunk of meat from the kitchen can’t rectify.

Permanent loss comes with the death your companions. Fail to spin your plates properly, and inevitably another survivor will get into trouble – showing up picture-in-picture on your screen as a mobbed bunch of pixels. Get to them in time and they might return to action after a day’s rest. Turn up too late, however, and they’ll only come back as walkers.

Survivors can be equipped with medkits and melee weapons, as well as guns – pistols, rifles, shotguns and machine guns, all new to The Escapists. But in the spirit of The Walking Dead, ammo is precious, and the sound of a shot best avoided where possible. 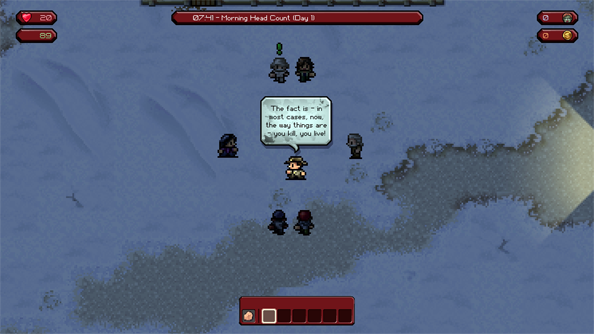 Trust Daryl with a piece, and you can ask him to target specific zombies in coordinated attacks – necessary in tackling the spin-off’s huge levels. Team17 reckon an Escapists map like Shankton is about a quarter of the size of some of The Walking Dead’s – which incorporate outlying, walker-infested areas that host items you’ll want to go out and grab, and travelling vendors you’ll want to trade with.

“In order to progress you’re going to need those juicy weapons and whatnot,” suggests Towell. “It does mean a lot more going out further afield.”

Eventually, you’ll be given reason to escape and move onto the next map – a rare point of commonality with the parent game that Team17 otherwise haven’t been afraid to depart from. Perhaps not everybody who found happiness in the tunnels of The Escapists will love this new relation. But the project’s leads promise it’ll chip away at a familiar sandbox fantasy.

“One of the big things from The Escapists was that you’d have a choice of how you approached a scenario,” recalls Riley. “You could go through the vents, you could dig under – that’s all still in there.”