“When you have eliminated the impossible, whatever remains, however improbable, must be the truth.” So goes the famous Sherlock Holmes quote. And so goes each trial in the Ace Attorney series; from game to game, from case to case, after inspecting your evidence and cross-examining your witnesses, you cut away the impossible and gradually approach – nay, embrace – the absurdly improbable truth.

The cases in the Ace Attorney games bear only passing resemblance to the events that might actually take place in a real court of law, but that scarcely matters. The Ace Attorney courthouse is more of a stage – imagine I’m making a theatrical gesture now and have ridiculous floofy sleeves, please – on which eccentric witnesses, defendants, and legal professionals with punny names perform their monologues and state their cases.

As they gesticulate, our bright-eyed and bushy-tailed lawyer protagonist – with the help of a level-headed young lady assistant – eventually coaxes out the truth. Aha! It was the butler all along! The true culprit invariably loses their cool so magnificently they manage to defy the laws of physics; their moustache turns into a helicopter rotor, or something to that effect. 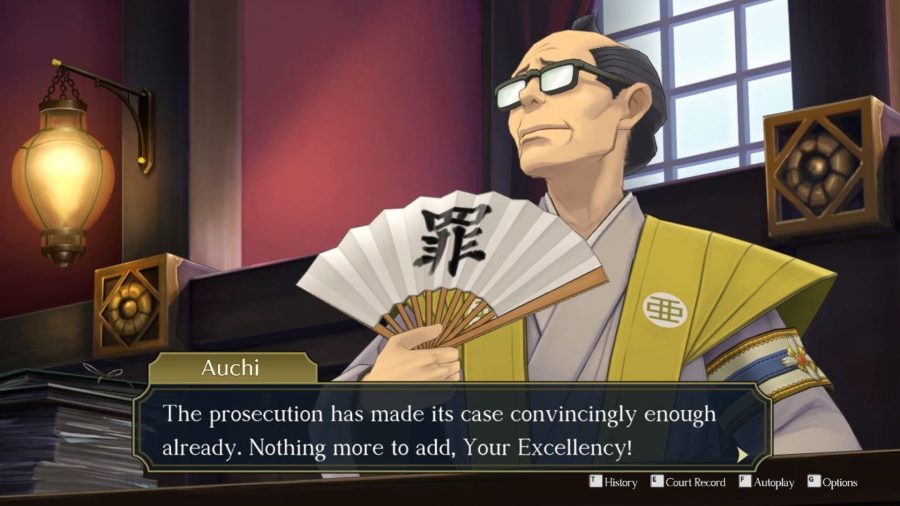 Unlike the main series, the Great Ace Attorney games are set at the turn of the 20th century – in Meiji era Japan and Victorian Britain – and star Ryunosuke Naruhodo, our beloved Phoenix Wright’s great-great-grandfather (approximately). Ryunosuke links up with famous British detective Herlock Sholmes. You know, Herlock Sholmes, the guy with the steerdalker hat. Ha ha ha. Good one, Jen.

Interestingly, in the original Japanese version of the game, Capcom used the name ‘Sherlock Holmes’, although Chronicles’ detective isn’t quite Sir Arthur Conan Doyle’s deductive mastermind. Sholmes is certainly skilled in the arts of deduction, but often ends up a little off the mark.

I had the chance to preview the first, third, and fourth cases of The Great Ace Attorney Chronicles ahead of its release next month. The story begins in Japan, and the first case introduces us to our protagonist Ryunosuke (not yet a lawyer) and his best friend Kazuma (actually a lawyer). Our guy is somehow under suspicion of murder, and must defend himself with Kazuma’s help; his explanation of court procedures serves as the gameplay tutorial. 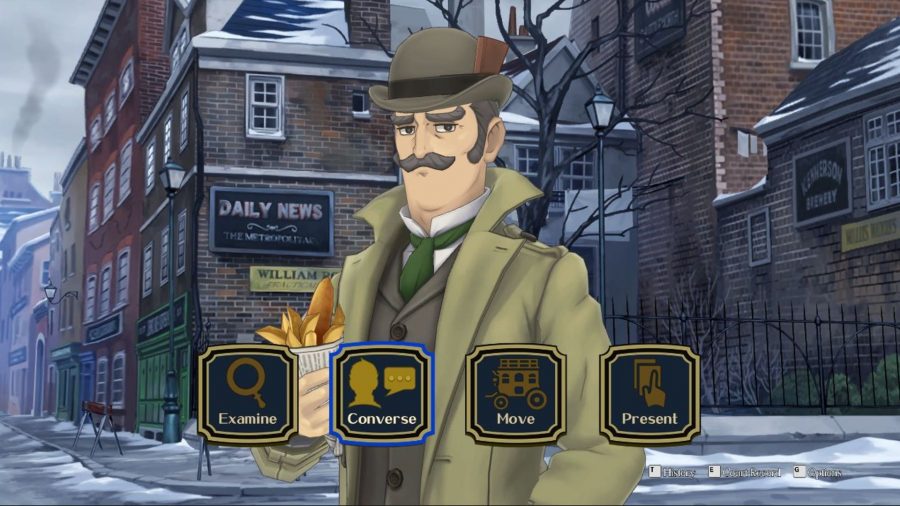 The prosecutor in the first case, Taketsuchi Auchi, will also be familiar to fans – he’s the ancestor of none other than Winston Payne, the first opponent we encounter in the original Phoenix Wright game. His Meiji-era counterpart waves around a paper fan scribed with the kanji 罪 (tsumi), meaning guilty; unfortunately for him, he is once again thwarted by a rookie lawyer, and his hair gets ruined.

The characters endear themselves right away; Ryunosuke with his furtive glances, shuffling papers between his hands and looking around like a nervous squirrel – not to mention his Phoenix Wright-esque propensity to sweat bullets. It must be genetic. Kazuma’s stoic sincerity commands respect as he thumbs the sheath of his katana, headband tendrils waving around dramatically behind his head. Prosecutor Taketsuchi, our foe, makes me roll my eyes in contempt as he waggles his head obsequiously at one of the witnesses.

The animation and writing join forces to make each character truly come alive; I find myself eagerly awaiting the introduction of each new individual to the stage. This means I was particularly excited by the introduction of the Jury mechanic in the third case, when we hop across to Britain and adjust to a different judicial style. The more ridiculous individuals we can cram into this courtroom the better. 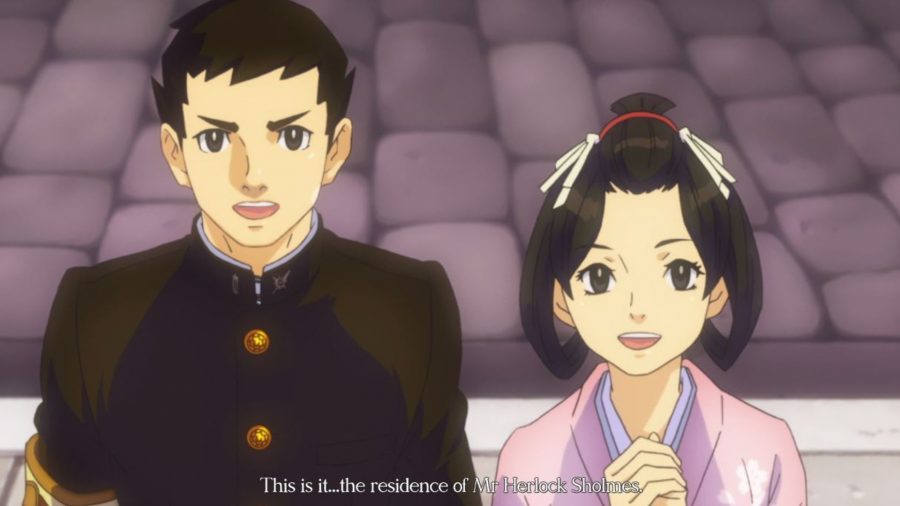 The jury system is a spectacle all on its own. Six jurors sit in front of the judge, and can indicate whether they’re inclined to deem the defendant guilty or not by slamming their fist on the bench, summoning a literal fireball which flies into the corresponding side of an enormous set of scales. Appropriate for a game in which honest-to-goodness fireworks are set off inside the courtroom when a ‘not guilty’ verdict is delivered. I don’t think they had fire extinguishers back then, either, which goes to show just how seriously these folks take justice.

The jury is used to up the stakes at various points in the narrative; each juror will turn on a dime and change their mind at the slightest provocation. When the jury all decide to declare the defendant ‘guilty’, this triggers a Summation Examination, where they must individually explain their decision to Ryunosuke. You can then pit them against each other and expose their logical inconsistencies. This doesn’t sound ethical in the slightest, but never mind.

As is typical for the Ace Attorney games, the plot of each case takes marvellous twists and turns; even if you can usually see a few steps ahead, you’ve no way of knowing how things will eventually develop. Once you’ve figured out what you need to present and when, it can be frustrating waiting for the opportunity to do so, as the characters opine and debate. But simply rushing through the text to get to the next interactive moment would be a mistake; better to sit back and appreciate the show. 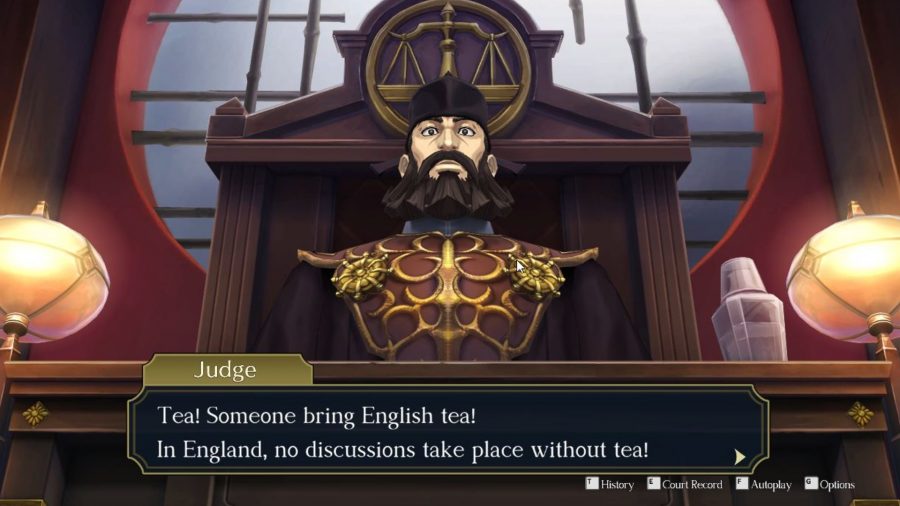 British idiosyncrasies and stereotypes turn up all over the place, to great amusement. Instead of the usual ‘Hold it!’ interjection in court, we get a very British ‘‘Scuse me’, and even a ‘Shut up!’ The wonderfully animated cutscenes are fully voiced in English, too. Adapting a Japanese game set in England into English must have been tricky, especially as characters canonically switch between the two languages in-game, but it’s all handled expertly.

Pre-order: You can grab The Great Ace Attorney Chronicles here

Unfortunately, the transition to the British Isles wasn’t so smooth for our protagonists. The British prosecutor, Lord Barok Van Zieks, is particularly nasty about the Japanese legal team across the bench from him. Additionally, the defendant from the fourth case, Soseki Natsume (based on a real person) is also Japanese, and laments his treatment on British soil. “No one here wants to listen to a man with a strange accent,” he says. “They all hate me!” That the Japanese students would experience racism on their trip to Victorian Britain is a sad truth worthy of acknowledgement – though the game places a heavy emphasis on bringing people to justice, I worry there won’t be any comeuppance for Van Zeiks.

British idiosyncrasies turn up all over the place, to great amusement

Fortunately, there are far more good eggs than bad, and Sholmes is perhaps the best of eggs. He’s a forgetful maverick detective who eventually joins forces with Ryunosuke, combining their powers of intuition to solve the mysteries of the fourth case. The ‘Dance of Deduction’ segments in which Ryunosuke rearranges Sholmes’ slightly wonky theories offers a fun change in gameplay, as we pan around to investigate the scene for alternative hypotheses. His Dr Watson is also a breath of fresh air – no musty old doctors here; Iris Wilson is a pink-haired child prodigy who is responsible for writing the famous ‘The Adventures of Herlock Sholmes’ in-universe, and also invents all manner of useful gadgets to aid Sholmes’ investigations. 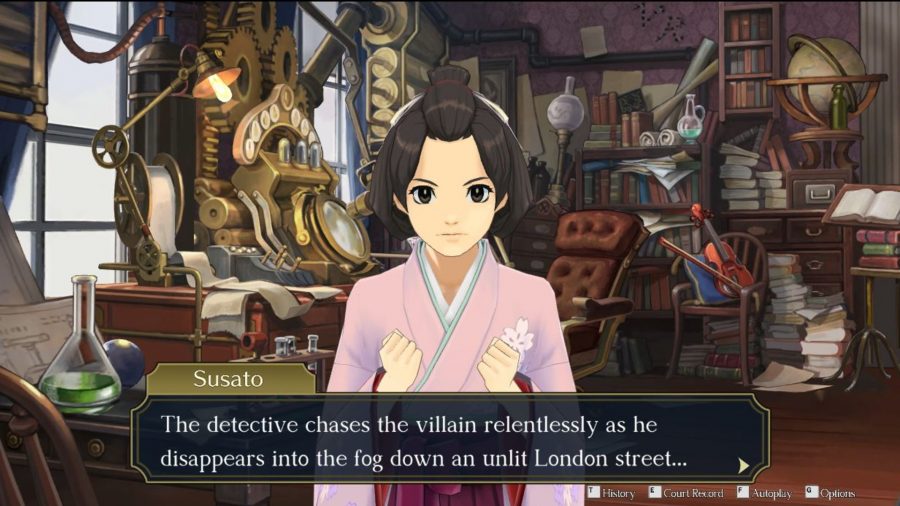 As a setting, Sholmes’ London is an excellent fit for the series – Ace Attorney Chronicles’ clever, tongue-in-cheek writing and absurd characters are right at home on the bustling Victorian streets, as all manner of curious incidents unfold in the smoke. I’m excited for the final verdict.

The Great Ace Attorney Chronicles releases on July 27, 2021. You can preorder The Great Ace Attorney Chronicles on Fanatical now. If, like Sholmes, murder mysteries are your forte, refine your technique with the best detective games on PC. If you’re a fan of story games but sweeping the crime scene for clues is a little too much work, the game can also be played in ‘story mode’, where the game progresses automatically without player input.