Some of the most unforgettable stories in recent pop culture have emerged from videogames, whether that’s the plight of Red Dead Redemption 2’s antihero protagonist or the fraught interpersonal crew relationships in Mass Effect 2. The best story games also let us act out our favourite icons, such as solving crimes as Sherlock Holmes, or saving Gotham as Batman. Story games are living, breathing narratives, and the best ones let us have our own say in how the plot unravels.

Story games are the ultimate escapism, but like books, different stories click with different people. So, we’ve included an array of brilliant story games that stayed with us for a long time after the final act. Whether you want some action-packed story loaded with plot twists, or you would prefer to set your own pace.

Here are the best story games on PC: 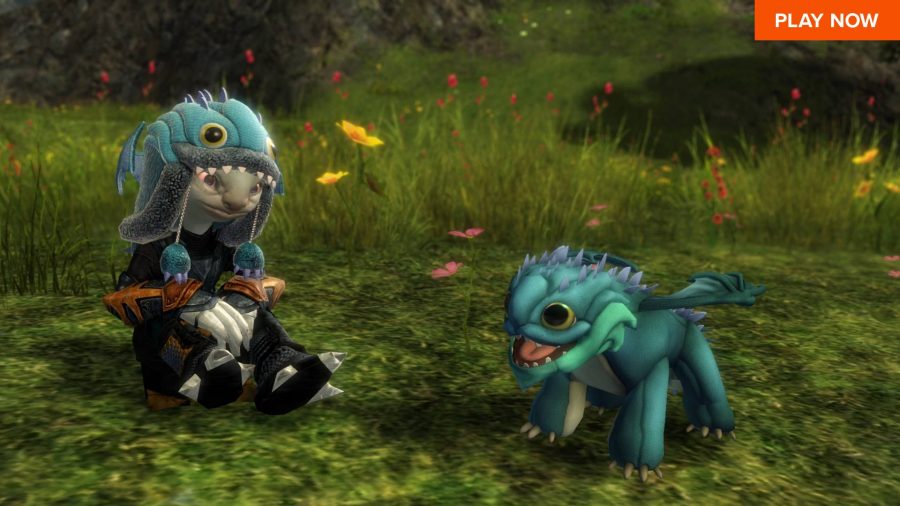 A story with multiple outcomes depending on your choices and actions is extremely uncommon for an MMORPG like Guild Wars 2. Unlike other games in the genre Guild Wars 2 ditches traditional fetch quests and opts for a cinematic campaign filled with dynamic events that crop up in the gorgeous open world.

Guild Wars 2’s main story branches out based on your decisions, forcing you to deal with the fallout of each one. For example, if you take on and fail to kill a group of provoked enemies, it’s likely they’ll make an appearance at another a later date, possibly even more hostile than your last encounter. 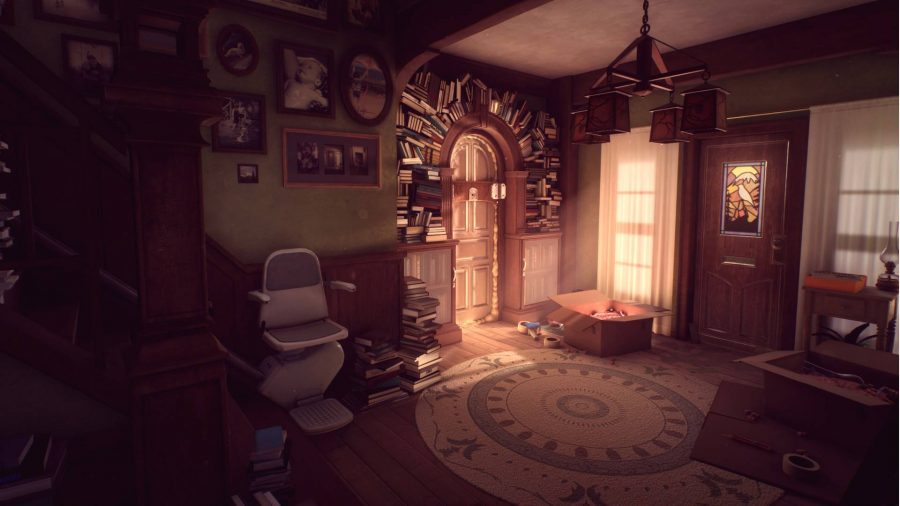 What Remains of Edith Finch

What Remains of Edith Finch is an exploration game that takes us on a tour of protagonist Edith Finch’s old family house, recounting tales of her relatives through stylised vignettes that range from working in a fish cannery to playing as a baby in a bathtub. As you explore Edith’s home, you’ll learn about her past and her troubled and unsettled life at the now abandoned Finch home as she relays how the family curse took hold of all her family members. What Remains of Edith Finch is a tragic journey through the eyes of Edith and her need to relive her haunted past to move on and strive for a new future.

Each mini-episode within the game tells the story of one of Edith’s family members, using different gameplay mechanics and genres for each one. The game can be played in a single afternoon, only taking around two hours to complete, so it’s perfect if you’ve not got a spare 100 hours. 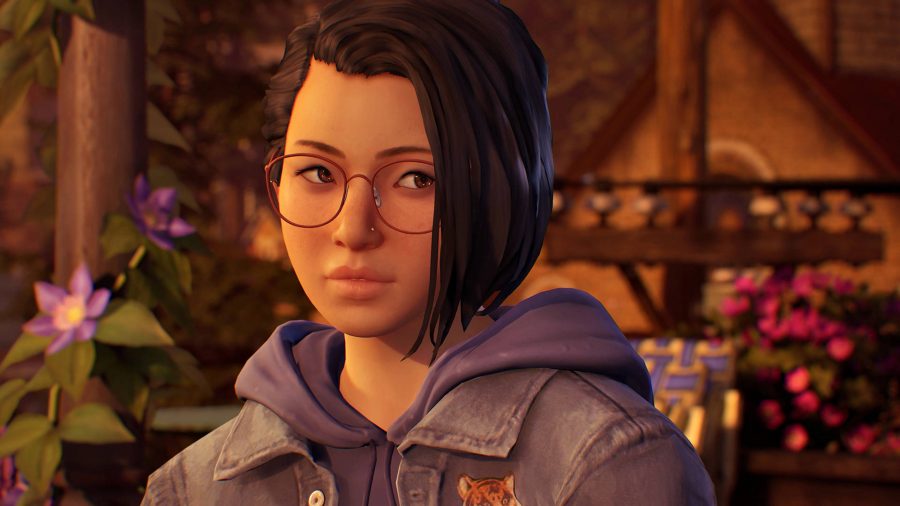 Much like the rest of the series, Life is Strange: True Colors is an adventure game built around an episodic storytelling structure. As Alex takes her first steps into the picturesque mountain town of Haven Springs, she is aware of her powers that allow her to sense other people’s intense emotions, occasionally manifesting them into uncontrollable outbursts. When her brother dies in a so-called accident near the mines, it’s up to Alex to solve the mystery behind his death, all while embracing her powers to find the answers she seeks.

True Colors’ main story beats are perhaps a tad predictable, but your decisions on how Alex uses the information she gleans from her powers give each choice some much-needed weight. Check out our Life is Strange: True Colors review for our verdict. 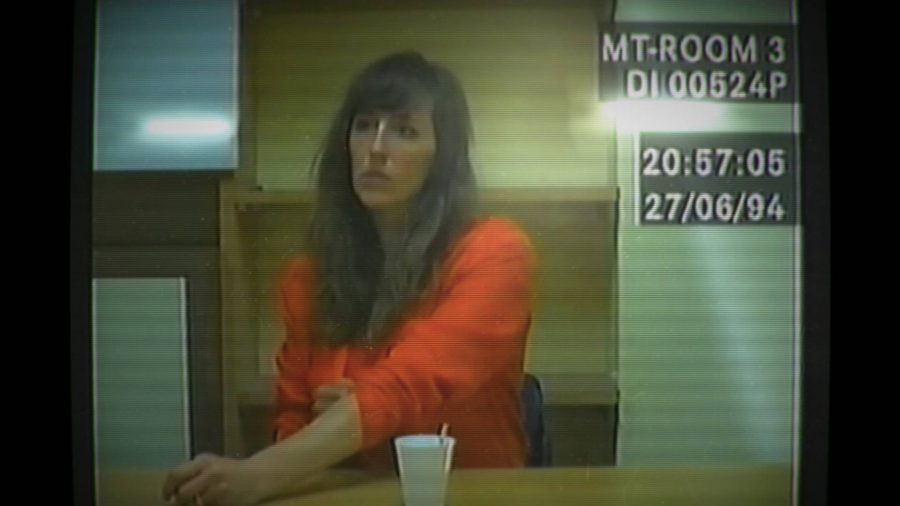 Her Story is classic whodunnit, except instead of investigating crime scenes and interrogating suspects you’re sat in front of an ancient police computer watching through snippets of the suspect’s testimony. You find snippets by typing keywords into a database search bar, which means the order you view the testimony in is totally up to you.

Depending on what leads you chase up, you might get the beginning, middle, or end, and draw all of the wrong conclusions as a result. Her Story mixes grainy full-motion video and its isolated subject to maintain an uneasy tone as you search archived footage of the subject and try to make sense of, well, her story. 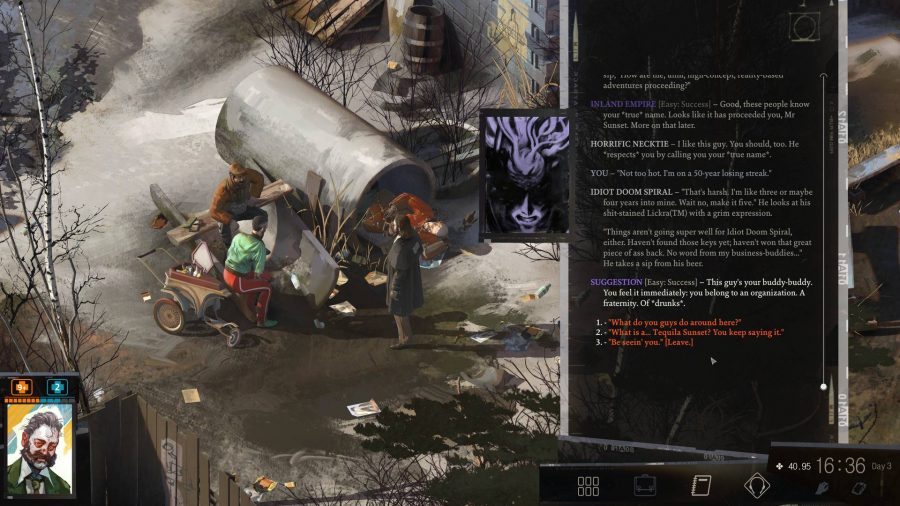 A detective game with heavy dialogue at its core, Disco Elysium’s seemingly simple story about a murder investigation in a poverty-stricken city quickly unravels into a magical realist Marxist class struggle. One of the best indie games to emerge in recent years, this RPG is packed with surprises as you investigate a murder, forming your character by making dialogue decisions, applying questionable items, and literally rebuilding your psyche from the ground up. Few games let you pour skill points into your savoir faire or punch a child in the face – Disco Elysium does.

Make it your own: The best RPG games on PC

With an endless amount of ways to investigate, you can choose to be aggressive, clever, a blind drunk wandering around in your underpants, or anything in between. Whatever you choose, you’ll be enamoured by whatever fever dream tangent the story takes you on. 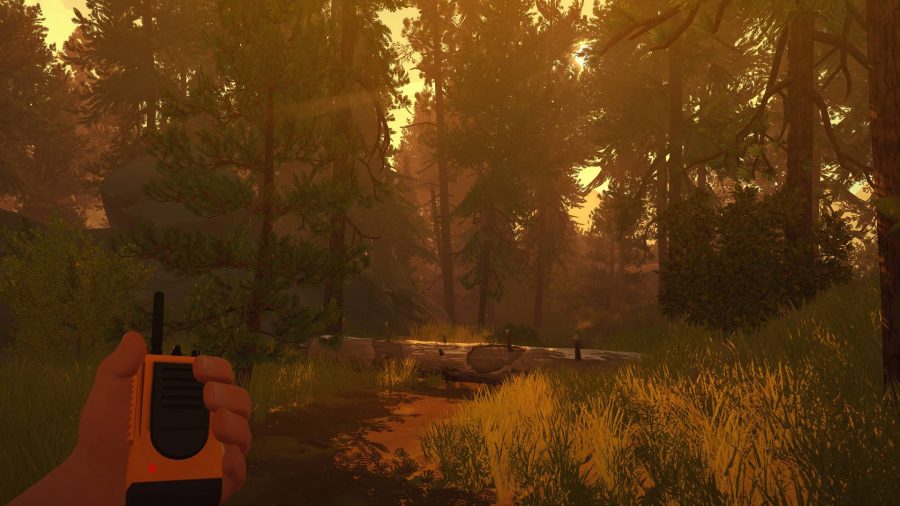 Firewatch is a first-person exploration game that casts you as Henry, a new fire lookout assigned to his post at the Shoshone National Forest, taking orders and communicating with his supervisor Delilah through a walkie talkie. Also armed with grappling gear and a map – you can explore a pristine stretch of Wyoming wilderness, unravelling the mysterious and sometimes frightening events that occur in the isolated forest.

Firewatch was one of the best games of 2016, praised for its impactful storytelling through casual conversation. It remains one of the most innovative story games to date, a meditative, ambient experience that you’ll want to play in a single session. 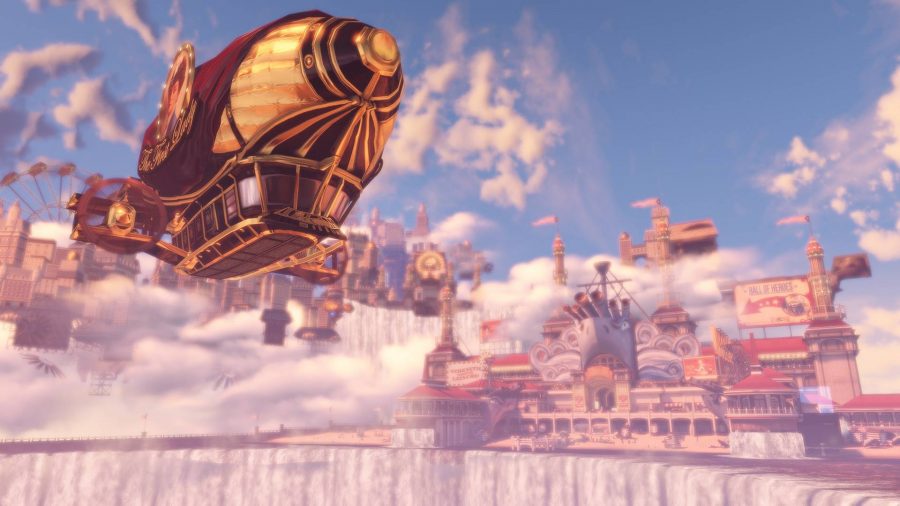 Bioshock boasted its fair share of shocking twists, but Bioshock Infinite’s story gives it a run for its money. Set among the clouds in a steampunk city full of racists and religious zealots called Columbia, this first-person shooter matches its action-packed gameplay with an equally unrelenting narrative that somehow manages to be intimate and human while also dabbling with string theory. The story is hauntingly beautiful and the main characters Elizabeth and Booker are a duo whose story captivates until the very end.

If you haven’t played a Bioshock game before, this is a fantastic entry point to the series as its plot is separate from the first two games. The story is told alongside plenty of action, as you clear out waves of enemies, so if you want a laid back story game experience, this might not be for you. 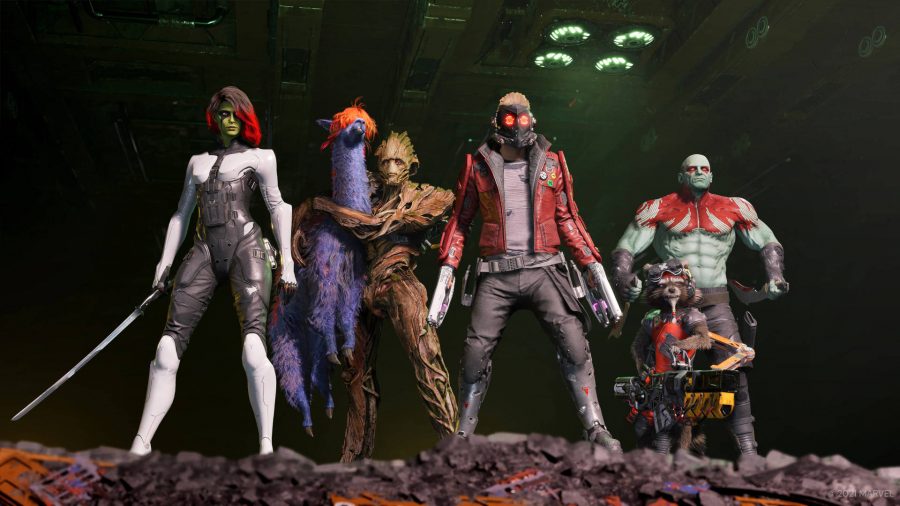 Marvel’s Guardians of the Galaxy

Marvel’s Guardians of the Galaxy asks that you’re at least familiar with these scrappy space mercenaries before starting the game. This has the advantage of not wasting time introducing every team member, instead focusing on telling a good story and cracking jokes, just like the films and comics.

Guardians of the Galaxy’s story is more profound than its surface suggests. It explores each character’s loss and how irrational decisions can potentially endanger the universe. The story is a big part of why the game’s worth playing, but it’s also an action-packed romp with detailed level designs and thrilling boss battles. Read more about this in our Marvel’s Guardians of the Galaxy review. 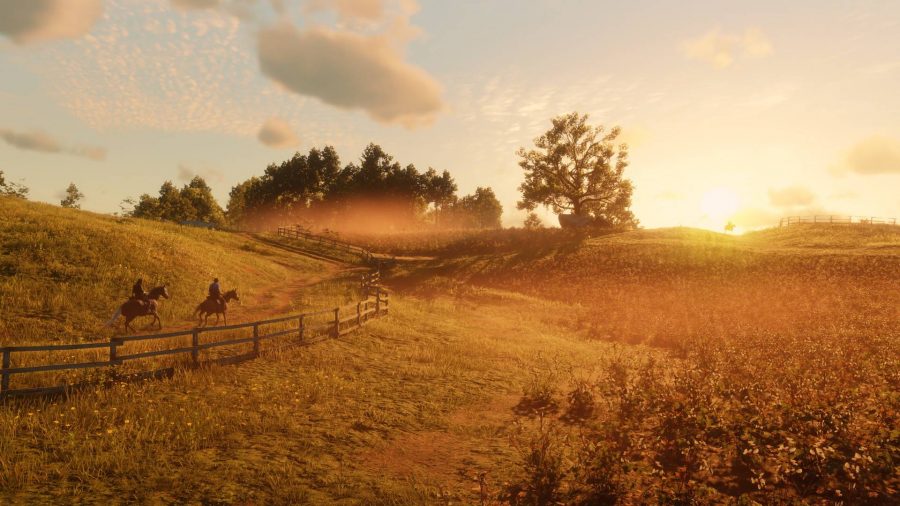 Red Dead Redemption 2 is a gigantic open-world game and one of the best PC games around. In the follow up to Red Dead Redemption, and a prequel to the events of the first game – you play as Arthur Morgan, a member of the Van der Linde gang. In a scrappy and desperate bid to save your makeshift family from the impending threat of a civilised West – where outlaws are suffocated by the tightening grip of law and order – RDR2 explores the fine line between survival and morality.

Related: Here are the best Western games on PC 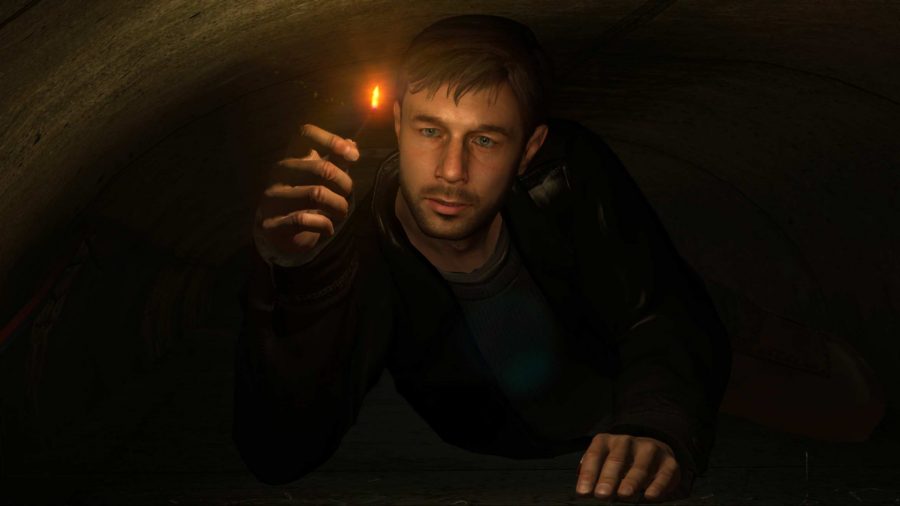 The Origami Killer is causing the disappearance of young boys in a city plagued by storms and relentless rain. Tracking down the killer is the only way to stop the deaths, as you piece together the story through the eyes of a father trying to find his son, a private investigator, a journalist, and a detective that will stop at nothing to unearth the killer’s motive.

While there’s not much scope for exploration in Heavy Rain, it is one of very few truly interactive story games. The player can affect the outcome of the narrative by influencing the story through gameplay mechanics – a mixture of quick-time events, puzzles, and dialogue selection. Seemingly minor interventions can result in different endings, making this a convincing realisation of the butterfly effect in videogame storytelling. 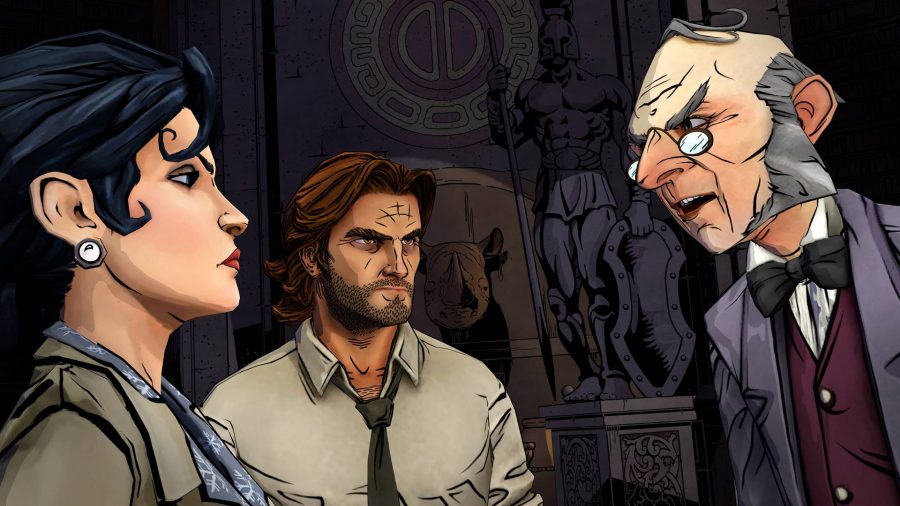 The Wolf Among Us

We could include any number of Telltale Games’ interactive stories, but the blend of famous folklore and fairytale characters placed into a nightmarish, neo-noir setting makes The Wolf Among Us an instant classic. The Wolf Among Us is a fantasy-realism crossover where fable characters live in a grimy 1980s New York, wearing a product known as glamour to mask their true appearance.

Featuring everyone from Snow White and Beauty and the Beast’s Belle, to Ichabod Crane and Dee and Dum Tweedle – you play as the big bad wolf, Bigby Wolf, on a mission to investigate a spate of fairytale character murders. You do this through questioning different fairytale characters, and as with any Telltale Games story, each dialogue decision you make or mis-click in an action sequence can have dire consequences. 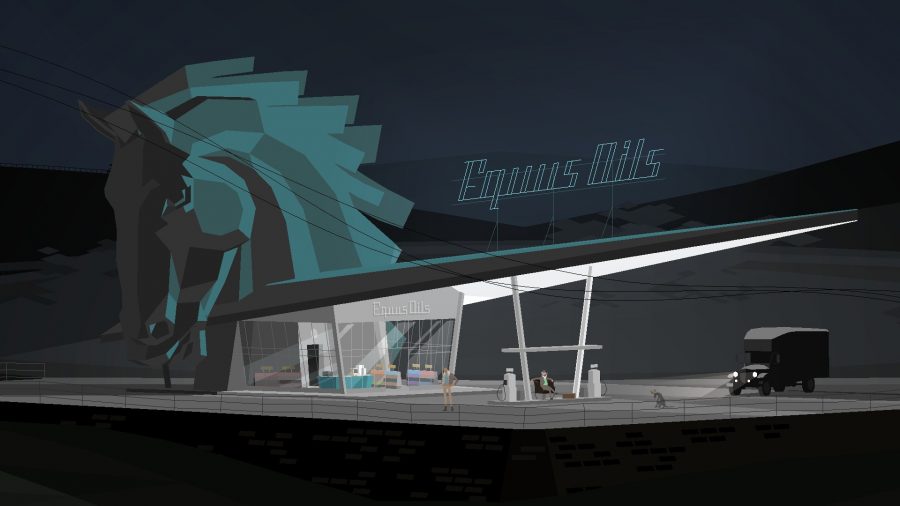 Kentucky Route Zero is a Lynchian magical realist adventure game exploring a blue collar community on a lost highway, Kentucky Route Zero. Taking on the role of truck driver Conway running the final delivery for his failing firm, the gameplay is driven by dialogue choices which slowly reveal a forlorn and elegiac tale of tragedy and redemption.

Kentucky Route Zero is about finding power and drive in the humdrum beats of the narrative. As you move through the story and ease into its world, the tidal, electronic score and piercing art style of muted colours and paper cutouts bring this rural stretch of American heartland to life. Don’t expect much in the way of dramatic plot twists or climactic action set pieces, instead Kentucky Route Zero is more concerned with the characters you meet and the journey itself. 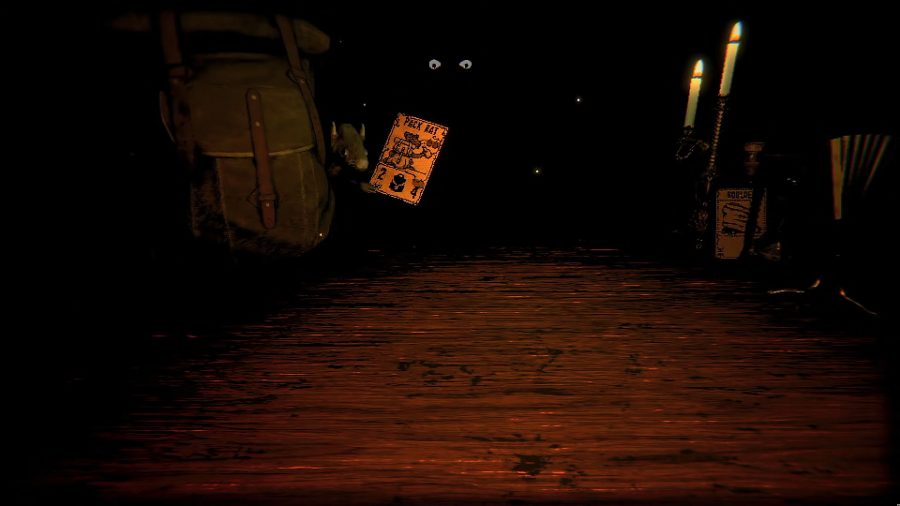 Inscryption is a horror card game that wants to mess with you. It’s similar to games like Hand of Fate and Slay The Spire, where a mysterious gamemaster forces you to play a roguelike card game in his remote log cabin. You sacrifice creatures to play better beasts as you journey across three boards to beat him and escape.

Related: The best horror games on PC in 2020

Before long though, the cards begin to talk to you, encouraging you to get up from your seat and explore the cabin, delving into its escape-room like puzzles to find a way out. With plenty of twists and turns along the way, this is one interactive adventure that’s sure to stay with you for quite some time.