We’ve never been able to rid ourselves of the suspicion that our stuffed animals have more fun when our backs are turned. It’s the eternal toys-come-to-life story – the magic at the heart of The Nutcracker, Winnie the Pooh, Toy Story and (less illustriously) Small Soldiers.

In The Mean Greens, a war rages every time the family home is left empty. Toy soldiers clamber from their box and occupy kitchen tops and bathtubs, fish tanks and foosball pitches, fighting among tribal lines – green vs tan.

You’ll find a couple of classics just as colourful on our best first-person shooters list.

“We try and make it so all the maps fit in one house,” explains lead programmer Andranik Aslanyan. “The ultimate home for a kid, with the biggest and best kitchen you can imagine, all these donuts, and then a big toy room that has a bunch of comic books in it.” 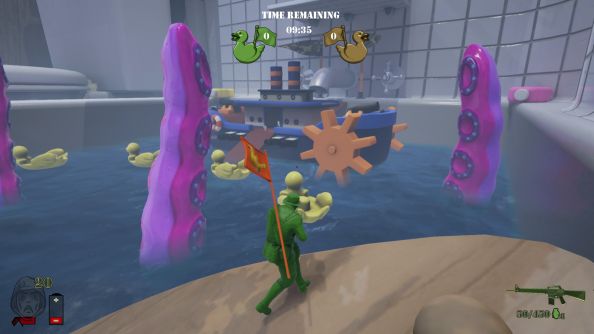 The precise details of the lives lived in the background of this competitive shooter have been left open to interpretation. But evidently this is childhood fantasy writ large. Rather than build the militaristic scenario toddlers might imagine when toy soldiers collide, developers Virtual Basement have animated the plastic people themselves.

“I’ve noticed a lot of streamers talk about the nostalgic effect it give them, what it was like to play as a kid,” says Aslanyan. “On the first day of release someone made a stop-motion video moving little toy soldiers.” 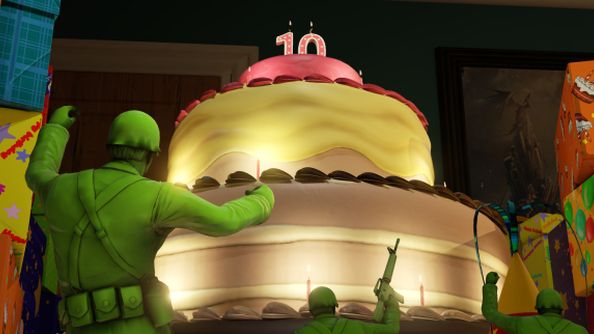 “A lot of shooting games have trouble figuring out what to use to provide cover,” reckons Aslanyan. “Here everything fits the theme – it makes sense to be placed in the way it is. A lot of thought went into what exactly we use in every map. We created a whole bunch of fake cereal brands and fruit brands. If you pay attention to the packaging, there’s a lot of puns.”

Toy Story’s soldiers, marching the baby monitor downstairs to conduct birthday reconnaissance, are a clear touchpoint for many. Aslanyan hears a lot of players reference the older Army Men game series, too.

“They weren’t the greatest things in the world but they were pretty cool for the time,” he remembers. “Most modern games don’t go for such simplicity [or] allow the environment and novelty to come through.” 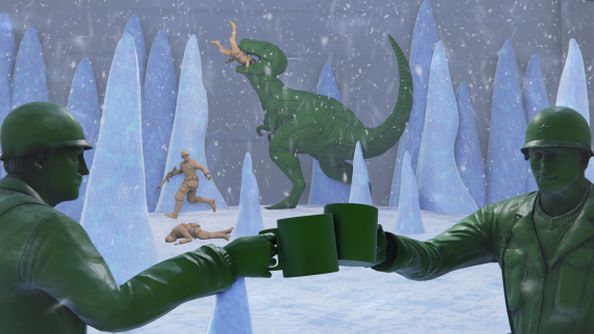 Virtual Basement, with a core team of less than ten led by veterans of raptor-ously received dinosaur combat game Primal Carnage, have put together a shooter that embraces its own novelty. The studio looked to the older Battlefront games for inspiration in the dodging and third-person camera departments – but were freed up by the fact that their players weren’t flesh and blood human beings.

If you ask a Mean Green soldier to jump, they don’t ask ‘How high?’. Instead it’s, ‘Am I standing in any party food?’

“Obviously jumping on a giant jello in real-life wouldn’t shoot you up a couple hundred of feet,” Aslanyan reasons. “But you can imagine [a child] moving the toy soldier and having him jump on this jello to get him on top of the cake. It does give us a lot of creative freedom, and Ashton [Andersen, game designer] used that to his advantage to design some of the mechanics.” 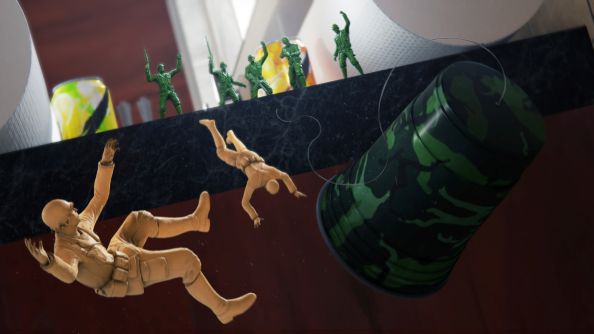 QA testers took to the concept almost too readily, hopping onto each others’ heads to reach out-of-the-way objects – leading to a “ton” of anti-exploitation map changes in every single iteration. But there’s a personality to Mean Greens’ playbox that Virtual Basement have been careful to preserve over the course of development.

“There’s a balance between making sure people don’t exploit the game and not killing the fun of it,” reckons Aslanyan. “There are hardcore gamers that just never want to die in the game because they’re used to playing Call of Duty and having a thirty kill streak – but this game is not built that way. It’s built to be fun for all.”

Since The Mean Greens’ release in early December, most of Steam has been kind (“This game made me forget I was an adult with responsibilities,” gushes one user review). The train map in particular inspires: combatants exchange fire between carriages as a tiny locomotive spins on its track around a Christmas tree and, every so often, underneath a rocking horse. 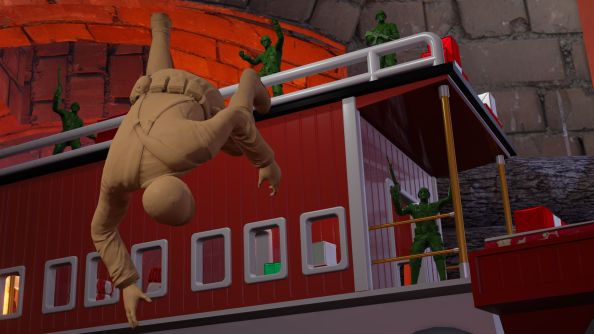 As it turns out, technically speaking, it’s the living room that spins. Moving the train only resulted in network inconsistencies and lag between players – so the team plumped for an illusory effect, twisting the tree, terrain and even the lighting in Unreal Engine 4. It’s a fitting solution for one of few competitive shooters on Steam you could describe as an ode to the imagination.

In this sponsored series, we’re looking at how game developers are taking advantage of Unreal Engine 4 to create a new generation of PC games. With thanks to Epic Games and Virtual Basement.