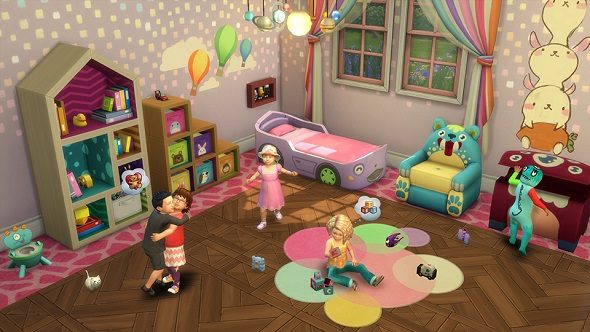 We recently reported on vampires coming to The Sims 4 as paid DLC later this month, but Maxis have just surprised us all with another creature that’s hellbent on stealing the life-force of others: toddlers.

Our list of the best sex games shows you how to make a toddler in real life.

Toddlers have been on the community’s wishlist for a long time, and there’s been no hint they were ever coming, so this should be a nice surprise to any Sims fans.

Previously, newborn sims would begin life as a baby – essentially a static object, just like real life – before turning into a teenager. As a parent of an angry six-year-old, it does feel like this happens in real life too, but this glosses over the grace period before they learn to tell you to shut up and instead keep you awake all night.

The last time toddlers were seen in the series was in The Sims 3. Maxis say they put a lot of thought into creating toddlers, beavering away on development in secret over the last couple of years.

You’ll be able to teach your kids new skills through using flash cards, help them learn to babble like a sim, and even to go to the potty. Bonding happens during bedtime stories, cuddles, and chatting about stuff the child is interested in.

The update adds over a hundred new animations, dozens of new interactions, and new suites of outfits and objects. Check it out in the trailer embedded above.