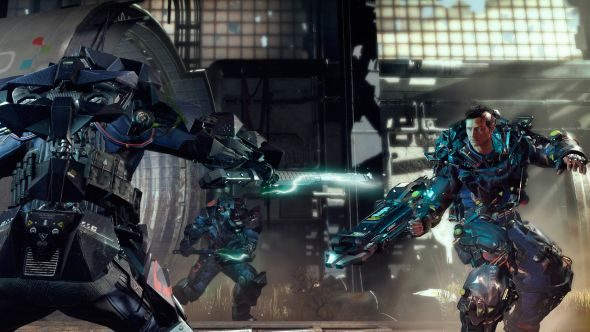 The Surge’s exoskeleton-clad protagonist is good at killing people – it’s sort’ve his deal. He’s not so great at talking to people, never really got into talking about his feeling, y’know? Most of the interactions we’ve seen up until now have focused on the brutal removal of limbs from their usual locations. In the above quarter-hour playthrough, we get to see how he deals with other, regular humans. Aggressively, it turns out.

For a complete list of this year’s upcoming PC games, we’ve got you covered.

Beyond that, we see some expansion of the limb-targeting system that governs the loot drops, as well as combat with a multitude of weapons. Included is some ranged combat, limited to drone usage that allows enemies to be pulled out of their hidey-holes and into your waiting staff blows.

It’s looking pretty good. Jordan got to go hands-on and enjoyed what he played, saying while The Surge is Souls-ish, it’s doing a great impression. From the above I’d have to agree, with the combat additions and increased speed being welcome changes, as well as the sci-fi nature.

It’s out in May, though an exact release date hasn’t been given yet. Polish and timing is everything. To tide you over, here’s our video preview: