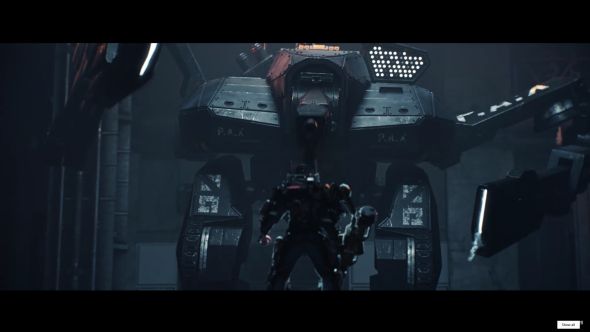 The first day on a new job can be rough. Awkward introductions, boring admin, workplace AIs going murderously haywire. You know how it is. Bet you haven’t had a first day as bad as Warren’s, the protagonist in forthcoming action-RPG The Surge. A new trailer gives us a taste of ‘the bad’ which ultimately progresses to ‘the worse’.

The Surge looks pretty good. See what else we’re looking forward to in our list of upcoming PC games.

Warren is a new recruit to world-saving megacorporation CREO. To judge from the trailer, his mandatory exosuit fitting operation goes a little more painfully than expected, and then it’s all downhill from there. Following an unexplained ‘surge’ in CREO’s network, their robots go on a rampage, employees’ cranial implants send them mad, and the plant’s AI decides it’d like Warren’s first day to be his last.

Naturally you’ll fight back, using CREO’s tools as weaponry. During battles, you can slice off specific limbs from your enemies and use the equipment they drop to upgrade your exosuit. Otherwise, the gameplay we’ve seen so far suggests a cyberpunk Dark Souls, which is alright by me.

The Surge is set in a “very grim” dystopian future, with the Earth overpopulated and ageing despite rampant environmental diseases. AI and robots have made many jobs redundant as humanity has slid into decadence. From this premise it’s not hard to imagine an AI would reach some murderous conclusions.

The Surge is due for release in May this year. We’re expecting more information on February 1 and 2 at publisher Focus Home Interactive’s ‘What’s Next’ event in Paris.